Everton foiled by Valdes in goalless draw on Teesside 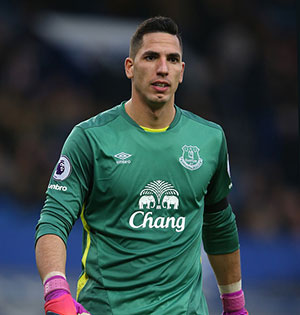 Everton suffered a set-back in their attempts to chase down the top six as they were held to a goalless draw by relegation-threatened Middlesbrough.

The Blues put six past Bournemouth last weekend but their attack was largely shut down by a stubborn Boro defence and on the few occasions that the hosts' back line was breached, goalkeeper Victor Valdes pulled off some vital stops.

The Spaniard came up trumps in a one-on-one duel with Romelu Lukaku in the first half and twice denied Ademola Lookman while his compatriot Joel Robles pulled off the stop of the match three minutes from time at the other end.

Ronald Koeman made two changes to the side that started last weekend's 6-3 win, drafting Idrissa Gueye back into midfield for his first start since the Africa Cup of Nations in place of Gareth Barry and Tom Davies for James McCarthy who, like Kevin Mirallas, was missing from the squad altogether.

And Everton began in the manner expected of the better side, with good possession in the early stages and a couple of early forays, one of which prompted Valdes to smother at the feet of Davies.

The home side, meanwhile, were looking to threaten through the pace and power of Adama Traore but it was Alvaro Negredo whose ball inside to Adam Forshaw following an error by Ramiro Funes Mori who caused panic in the Blues box before Robles charged the ball down.

Seamus Coleman then put in last-ditch saving tackle on Traore before Davies pounced on an error by Bernardo to send Lukaku away but Valdes saved well with his foot to keep it goalless with half an hour gone.

The Boro keeper was on hand to make another save with his leg when Coleman surged down the right on the overlap and his cross ended at the feet of Lookman at the far post but despite wrong-footing his marker with a clever drag-back, he couldn't beat Valdes.

The 19-year-old also hit the side-netting with a low shot late in the half as Everton pressed going into the interval but their intensity dropped in the second half and it was the hosts who came out for the second half as the stronger team.

Aitor Karanka's men have struggled for goals all season though and Steve Gibson could only head straight at Robles from a free kick on the edge of the box and Leighton Baines had to head off his own line following a corner just past the hour mark.

Koeman had made his first change by that point, withdrawing Gueye in favour of Enner Valencia, but it was Lookman who had the best chance for the Toffees in the second period. The youngster was put in brilliantly by Ross Barkley's pass but again he was foiled by Valdes as he tried to fire home from the angle.

Karanka, who was fortunate to have his full complement of players after referee Mike Dean ignored what was a second bookable offence by Adam Clayton, threw Rudy Gestede on for the final few minutes in place of Negredo and the big striker came very close to winning it with a powerful header but Robles pulled off a magnificent reflex save to tip it over the crossbar.

It's a draw, the first 0-0 under Koeman, that extends Everton's unbeaten run in the league to eight games but with Manchester United winning at home against Watford, it also represents two points dropped in the pursuit of the top six.

The team now leaves the sleet and driving rain of Teesside and heads to Dubai for a warm-weather training camp to help fill the two-week break to the next match at Goodison Park against Sunderland.