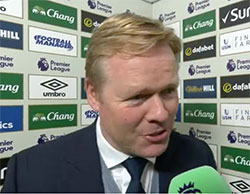 Ronald Koeman admitted that he wanted more from his side against Watford today but expressed his satisfaction with Everton's best home record for 27 years.

The Toffees finished their home programme for the current season with their 13th win at Goodison Park in 19 fixtures and their best points return since the 1989/90 campaign when they played two more games.

Ross Barkley netted the only goal as Everton narrowly beat the Hornets 1-0 and, not for the first time this season, the manager was left to bemoan another flat first-half performance.

“The first half wasn't good and we did not have that intensity," Koeman said afterwards. "We did not make it difficult for Watford. The second half was much better. There was more aggression on the pitch.

“We could have scored more than Ross's goal. Watford created only one chance during 95 minutes in the game, so it was a well-deserved win tonight.

“We have a fantastic home record - forty-three points at home with 13 wins out of 19, is really good.

“We are proud of the performances because what you like is to be strong at home. We lost some away games unnecessarily and we know in the situations we need to improve, but let's keep up this home record because that is a lot of points.”


Dermot Byrne
1 Posted 13/05/2017 at 06:49:32
My view of the boss has gone up and down this season. I think overall he could be good but wonder about head coach. Who is instilling fire? Maybe Koeman with Unsy as head coach could solve that?
Liam Reilly
2 Posted 13/05/2017 at 09:24:42
13 wins out of19 with that squad in that league is pretty good; especially after what we witnessed at Goodison for the past two seasons.

Even two more away wins and a draw to add to the fantastic home record, seven more points – we'd have been bang in the mix.

We have amassed 43 points from the home games but only 18 points from the 17 away games played. Notable to see the points lost at home are the usual suspects with citteh and gunners the exception.

First and foremost, I think the away form needs to improve against the teams below us. The failure to beat the likes of Swansea, Middlesbrough, Hull and Watford on their own pitches has been costly. Yes, it would be great to get a win at one or two of the big clubs but we need to start mopping up points from more of the weaker ones next season.

The worrying thing is how our away form has deteriorated during the course of the season. We took six points from the first two games at WBA and Sunderland. In the following 16 matches, we have taken only 12 points which would be relegation form but for our excellent home record.

Yes, our away form is worrying but you still have to give credit where it's due. That is some statistic, like Koeman or not.

Well done to the coaching staff and players. A big turnaround from the previous lot. Long may it continue.

Or am I in trouble of being labelled a ' Pro-Koemanite'? Sad really.

Only Man City and Arsenal are games I remember as a visceral tubthumbing kind of win.

No wins in the Premier League are easy so fair dos... decent but not memorable, is that fair? Maybe.

Function over artistry, power over creativity.

Of course, next season it will come, as it always will preseason!