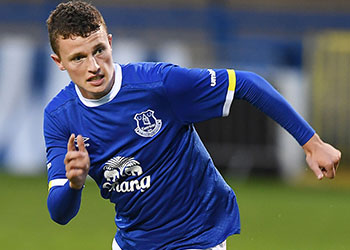 Everton U23s striker Nathan Broadhead has agreed terms on a three-year contract with the club.

The Wales U20 striker has signed a new deal that ties him to the Blues until 2020.

"I've been an Evertonian all of my life and it feels like the perfect place to be for me," Broadhead said.

"I'm just glad it's all done and I'm looking forward to next season now."

Note:: The length of Broadhead's contract was erroneously reported above as being five years and has since been corrected.

Let's hope he has what it takes to make it to the top.

That would have been the best headline...

Kevin Gillen
5 Posted 22/05/2017 at 15:58:12
This is obviously a joke thread to counteract the fact Barkley hasn't signed a contract yet and Koeman hasn't got the statement from the club he promised yesterday, right? Pleased for Nathan Broadhead if I'm wrong.
James Hughes
6 Posted 22/05/2017 at 16:03:17
Kevin, it's from the official site mate, the only joke is the sad soap opera being played out at present. Unless Broadhead is a fictional player made up by the club to distract all.

Dear me, Jesus, talk about a snowflake mentality.

Granddad Yurcan: 'Tut! Why couldn't that headline have said "Veronica Lake to star with Clark Gable in new MGM thriller"?'

As for Barkley, if he does not want to sign, let him go and allow Ronald to try and bring in the players he needs.

Personally surprised Brewster wasn't made automatic first choice for U23s. Seems to have everything. U23s wasn't blessed with a striker before buying Calvert-Lewin..

Clarence, I hope not! ðŸ™ˆ

That's exactly what I thought. He must be really highly rated to get a 5-year deal.

I can't believe we haven't signed him up on a longer contract yet. He's been brilliant in the U23s all season, captains the team, and just got MotM for the England U20s against Argentina.

I believe his contract runs out this summer. When I've seen him play, he has been impressive. Looks a good prospect to me.