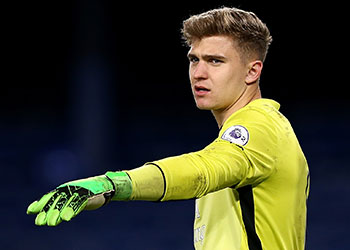 Mateusz Hewelt is the latest player to have extended his stay at Everton by agreeing a new deal until 2019.

The Polish-born goalkeeper has become the first-choice goalkeeper for David Unsworth's title-winning Under-23s team and is the third-choice option at first-team level at the moment behind Joel Robles and Maarten Stekelenburg.

He spoke to evertontv.com after his two-year contract extension was made official, saying:

"I am delighted. It gives me another two years to achieve as much as I can. Hopefully, I can get out on loan at some point and keep working to getting closer to the first team.

“It's an exciting time to be at the Everton, with the investment that has come in and Ronald Koeman being here and us having a good first season. We all want to build on that now.

“It has been a great season for me. I played all but one game for the Under-23s, I've been training with the first team and I've been on the bench for the first team on a few occasions as well. “It's great to be around the senior goalkeepers, it's the real thing. I've learned from them and it's taken me up another level.

Very good shot stopper - all the best to the lad.

David Ellis
3 Posted 25/05/2017 at 02:43:12
Hopefully he can move up to challenge Stekelenburg to be our No 2 over the course of next season as Robles departs (as he surely will given his ambition) and a new No 1 joins over the summer.

Dave Abrahams
4 Posted 25/05/2017 at 15:38:00
David (#3) – young goalkeepers don't tend to get a chance to come through the ranks at most Premier League clubs, the last two at Everton if my memory is right were Andy Rankin and Geoff Barnett in the sixties and they had to move to Watford and Arsenal to make it in the game.

Russell Griffiths has just been released and he looked a very good keeper three years ago, hopefully some club will, pick him up and give him a chance.

A few years ago we had two very promising goalies in John Ruddy and Ian Turner, Moyes dithering as usual told Chris Woods to keep the best one. Woods chose Turner who finished up with a Scottish club while Ruddy had a good run at Norwich City but has been let go this summer and is available on a free: if Kenwright hears about this, we are likely to get him back in the next couple of months.

"Russell Griffiths has just been released"

Do you remember where you saw that? Google don't give me nothing. However, one story says Motherwell (where he's been on loan) are talking to him about a permanent contract, adding that he will be a free agent in the summer (so yea, same thing as 'released').

Please post any other info you see on our development players being released.

He then went to Motherwell (Scottish Premier League) played 4 games, conceded 4 goals, but sat on the bench for the next few months.