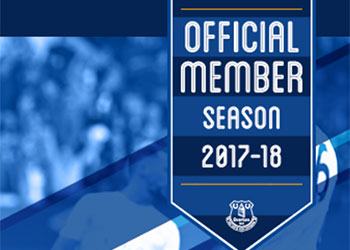 Everton have introduced a new membership scheme for the 2017-18 season.

Replacing the Foreverton scheme, the Everton Official Membership offers a number of enhanced benefits including free access to streams of pre-season matches, helping supporters to ‘get more Everton'.

As an Official Member, benefits will also include:

With every Premier League fixture at Goodison Park sold out throughout the 2016/17 season and the demand for match tickets higher than ever before, an Official Membership gives Evertonians the chance to get their hands on match tickets at least three days before they go on general sale*.

Members will also be added to the waiting list for Season Tickets for the 2018-19 season, with a chance to purchase any non-renewed Season Tickets.

Official Members will be able to get closer to the action than ever before with a range of exclusive digital content available throughout the season. Starting this summer, members can watch live streams of selected pre-season fixtures — including Everton's friendly against SportPesa Cup winners Gor Mahia FC at the Tanzania National Main Stadium in Dar-es-Salaam on Thursday 13 July.

Through evertonfc.com, members will also be able to access an enhanced weekly Everton Show alongside a new Everton Podcast, live streams of selected fan events and Under-23 games, exclusive player interviews and Premier League post-match analysis from Club legends and Ambassadors.**

Official Memberships are broken down into four categories — Adult, International, Young Blues (5-17) and an introductory package for Infants (0-4).

All Young Blues (5-17) will be entered into a draw with the chance to lead the team out at Goodison Park as a matchday mascot, as well as having the opportunity to take part in a number of events which include playing on the hallowed turf of Goodison Park or at USM Finch Farm. For those junior Blues aspiring to follow in the footsteps of first team stars like Tom Davies, their parents or guardians can take advantage of a 10% discount on Soccer Schools throughout the season too.

Those who have purchased a Season Ticket for the 2017-18 campaign will automatically be enrolled as a Season Ticket Member, receiving their own exciting benefits. Lounge Members are also provided with a range of exclusive benefits.

Members at all levels will receive cashback rewards for shopping at more than 3,000 online retailers. Cashback can then be exchanged for vouchers to purchase Everton products, including matchday tickets and merchandise.

Richard Kenyon, Director of Marketing and Communications at Everton, said: “We're really pleased to be able to launch our new Official Membership scheme for 2017-18. These new products have been shaped by fan feedback and a review of other schemes in football and outside of football.

“Our Official Membership will still provide priority access to match tickets, but will now include a whole host of other benefits, including free access to live streaming of selected pre-season fixtures, enhanced post-match content, new and improved competitions and free entry to Under-23s and Everton Ladies games. Members can also earn points by shopping at selected retailers, that can then be redeemed against match tickets and merchandise.

“Young Blues will get the opportunity to play on Goodison Park or at USM Finch Farm which we are sure will prove very popular. All of our Season Ticket holders and Lounge Members will receive all of these benefits too, as they are automatically enrolled into the scheme.”

Everton's new Official Membership scheme will be available to purchase from Wednesday 28 June priced at just £25 a year for Adults and International members and £10 for Young Blues (5-17). Infants (0-4) can become Official Members for free.

For more information and to purchase your Official Membership, from Wednesday 28 June, visit evertonfc.com/officialmembership.

Just one point! I will be in UK late August and late September. The only game I can get to is the Man Utd game at Old Trafford. How can I get 2 tickets to the game?

You might be struggling to get tix in the away end of old Trafford. Everton often fill out their away allocation, especially for the 'big' games. Become a member so you at least get access to unsold tickets before they go on general sale.

For *Home* games (if that's still an option for you), you need to buy an international membership soon. When I did it, they required one international membership code for each ticket you wanted to buy. So if you want a second seat, you'll probably have to buy an extra membership in the name of your missus or something. Then, figure out the precise release times for presale tickets. Stick it in your diary. And then hit the ticket website real, real fast, within a couple of minutes of the tickets going on sale.

For *Away* games, you're stuffed. No chance, mate. Away tickets are allocated based on your prior attendance record. For an Old Trafford fixture, it ain't gonna happen. Your only option here is to accept that you won't get a seat in the Away fans end. But, if you're willing to dress in neutral colour and limit your supporter reaction, you can go along and sit in one of the United fan sections. There are a number of sports tourism businesses who will sell you a package that includes tickets to the game. Just be sure to choose one with a good reputation/reviews, and be prepared to pay a LOT of money (like double the normal going rate, if not more). Hopefully someone here can recommend one for you.

Maybe you can go to this one instead?

Do what I do and also join a Everton supporters group in England. I always get away tickets from members who can't make it.

Eric Myles
10 Posted 26/06/2017 at 14:14:24
The International Membership should be cheaper than the regular membership, it's not like we'll be attending games every week.

But the on demand video footage would be interesting, and pre-season games since my missus has put her foot down about going to Tanzania.

Provided they've sorted out the video problems they had 12 years ago which was the last time I subscribed.