The Life and Times of Peter Meehan 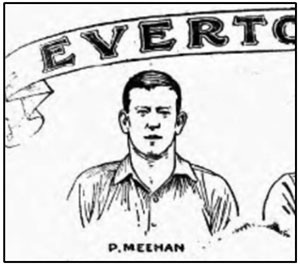 Yet another product of the Scottish Shale Mining industry, Peter Meehan was a strong-willed individual whose stubborn personally was to bring him into conflict with the management at two of the football clubs by which he was employed. He was a brilliant full-back who appeared to have complete confident in his own ability whereever he played.

Despite the fact that his name appears in the English press as Meechan, he was in fact born on the 28th of February, 1872 with the surname of Meehan. His parents, James and Ann, were born in Ireland and Peter, their first born, was welcomed to the world at Uphallgate, Broxburn in the County of Linlithgow. When considered old enough to be employed, he followed his father into the local shale mining industry.

The 1891 census finds the Meehan family living on the Steward Field Row where a second child, Anne, has now been added to the family. Peter first played junior football for Broxburn Emmett before moving up to senior level with Broxburn Shamrocks from where he joined Scottish League Division 1 side, Hibernian. The classic style of play displayed by Meehan was quickly noticed by a talent scout from Football League Division 1 club Sunderland, for whom he signed professional forms in September 1893.

On the 27 of October, 1894 Meehan was first seen at Goodison Park as Everton and Sunderland both challenged for the championship. Trailing 2-0, Everton hit back to force a draw. Meehan however, went on to win the Football League championship with Sunderland and was awarded with a medal. On the 24th of October 1895, he returned to Scotland and signed for Celtic.

Things started smoothly for Meehan at Parkhead where he settled quickly in to the Celtic line-up and helped them win the Scottish League championship in 1896. On the 28th of March that year he won his only international cap when he played for Scotland in a 3-3 draw against Ireland at Belfast. Nonetheless, Meehan was soon to leave Glasgow in rather controversial circumstances.

The Celtic players were offended by the remarks made by a journalist who severely criticised their performance in a Glasgow Cup defeat by Rangers. When the next home game took place against Hibernian the players refused to take to the field until the offending reporter was removed from the press box. The club management refused to grant their request and ordered them to take to the field. Peter, along with Barney Battles and John Divers, held their ground and refused to play to take part in the game.

The following week all three players were placed on the transfer list. When news reached the ears of the local agents, several of them attempted to gain their signatures. Peter Meehan decided to join Everton for a record fee of £450.

Great interest was taken in Meechan the latest Scottish recruit. The game had not been sometime in progress before an opportunity was afforded him of showing his ability and that he was a success on the days play was freely admitted. His style of play is vastly different from that of the general run of league backs. He tackled his man with a cool confidence that must be confessed kept the Everton enthusiasts on tenterhooks as to the result, but he invariably came out right in the end, as Cooley pasted the ball to a half back with an air of an accomplished forward. Rash kicking was not resorted to and providing the confidant business is not overdone, he should prove invaluable to the clubs remaining fixtures. [Liverpool Mercury]

Meehan represented Everton in the rest of the season’s league and cup campaigns and was a member of the side that was beaten 3-2 by Aston Villa in the FA Cup final. During the summer recess he returned home where, on the 5th of August, 1897, he married Anne Thomson, a resident of Niddrie, at the Roman Catholic Church in Broxburn. Barney Battles, his former Celtic team mate, witnessed the event and signed the marriage certificate.

Next season the Scotsman continued to command the right back position at Everton but slowly lost favour with the selection committee early in 1898 and was replaced by Billy Balmer. Nevertheless, he spent a trouble-free period of 18 months with Everton before being put on the transfer list for an asking price of between £100 and £200. He had made 28 league and FA Cup appearances for Everton without getting his name on the score sheet.

Meehan left Merseyside during the summer for an undisclosed fee and joined Southern League side, Southampton, bringing their complement of Scottish players up to 14. During his first season on the South Coast he helped his new club to win the championship and thus became the first player to gain an English, Scottish and Southern League championship winners medal.

Next season he was part of the Southampton side who reached the FA Cup final but were beaten 4-0 by Bury. The club however, won the Southern League for a 3rd time but Peter Meehan had fallen in to conflict with the management, concerning team selection, and departed for Manchester City where he played 8 Football League matches. He later moved back to Scotland where he briefly played for Clyde before ending his football career back amongst Shale Mines of Broxburn.

In the February 1906, Meehan left these shores for a new life Canada and landed at Halifax, Nova Scotia. The following July his wife and children followed him and left from Liverpool aboard the Allan Liner, SS Siberian. The Meehan family eventually made their home amongst the community that had been established on Cape Breton around the village of Port Merion where the head of the house obtained employment as a Coal Miner.

Sometime in 1915, he is believed to have caught pneumonia from which he died while his wife was pregnant with their eighth child. Peter Meehan, a former player with Everton Football Club, is buried in the old graveyard near to the present-day Roman Catholic church of St Mary & St Gregory near Port Merion, Nova Scotia. His last resting place is pictured here.