Hapless Everton are humbled by Spurs 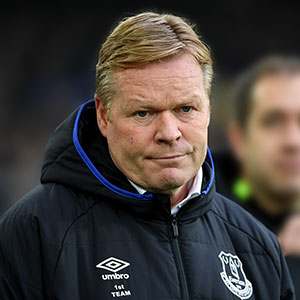 Ronald Koeman's side had no answer to Tottenham's clear superiority

Everton were easily out-classed by Tottenham, registering a solitary shot on goal in a demoralising defeat to the North Londoners at Goodison Park.

Harry Kane helped himself to two goals, the first a fluke that opened the scoring shortly before the half hour mark while the second killed the contest at the start of the second half. In between Christian Eriksen scored the other in an embarrassingly comprehensive victory for Mauricio Pochettino's side.

Ronald Koeman abandoned the five-man defence he has preferred up until now and deployed Cuco Martina at right in his first Premier League start for Everton while Davy Klaassen and Sandro Ramirez returned from injury but it was hard to discern the manager's gameplan.

The Blues pressed gamely enough at times but offered almost nothing going forward themselves while they struggled to contain Tottenham's increasingly penetrative build-up play.


Eriksen probably should have scored with 11 minutes gone when Dele Alli chested down a Ben Davies cross from the left and laid it off to him but the Dane lashed his shot wide.

The first goal came from the opposite flank, however, when Kane looked up and swung in an attempted cross that looped over Jordan Pickford and under his crossbar.

1-0 became 2-0 three minutes before half time when a slip by Martina, enduring the kind of torrid afternoon defensively that his Europa League performances suggested he would, let Spurs in and while Davies's shot was blocked by Pickford, Eriksen was on hand to plant the rebound past him into the net.

Alli should have put the game to bed in first-half stoppage time when he popped up completely unmarked in the centre but mis-kicked in front of goal but Kane did put the contest beyond doubt before the second half was a minute old.

Another uncontested cross from the left flank found the England striker in oceans of space and he just had to turn the ball past the goalkeeper from a central position to make it 3-0.

That goal had rendered Koeman's half-time double change essentially meaningless but the Blues did show a little more energy and purpose with Tom Davies and Dominic Calvert-Lewin on in place of Klaassen and Sandro.

Spurs were comfortably in the ascendency and demonstrably the better team and they went close to extending their lead when Kane and Eriksen combined impressively only to see Pickford make a good one-handed save to deny the latter.

A minute later, Alli's low centre came off Morgan Schneiderlin's heel and Pickford saved Kane's shot before Sissoko, completely unmarked in the middle, thankfully made a mess of his header when he could easily have deepened the Goodison gloom with a better connection.

Up to that point, an early chance that Sandro had been unable to guide goalwards and Gylfi Sigurdsson's wayward volley in the first half were really the only time Everton had threatened Hugo Lloris's goal.

The Frenchman caused his own problems six minutes past the hour mark, though, when he gifted the ball to Idrissa Gueye but he couldn't steer a shot on target with the ‘keeper scrambling back to cover his empty net.

Nikola Vlasic came on to add some more running with 10 minutes to go but despite his enthusiasm, Everton came no closer to scoring. Rooney air-kicked an excellent Leighton Baines cross, Calvert-Lewin's ensuing shot was blocked and Sigurdsson's effort after that was deflected behind.

And the otherwise quiet Icelandic international saw another shot deflect wide in stoppage time after Rooney had headed disappointingly off target.

All in all, it was a hugely dispiriting afternoon for an Everton side that has now registered just three shots on target in as many Premier League matches and has two tough away assignments coming up in the next eight days.