Everton escape with a draw thanks to last-minute penalty 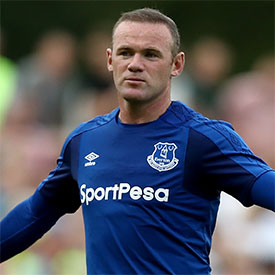 Phil Jagielka returns to captain the side

A 90th-minute penalty by Wayne Rooney salvaged a point at the Amex Stadium but it's unlikely to ease the pressure on Ronald Koeman.

Everton were heading to a fifth defeat in six Premier League games when Anthony Knockaert fired Brighton into the lead with eight minutes to go but a cynical block on Dominic Calvert-Lewin by veteran defender Bruno allowed Rooney to earn the Blues a draw.

On the balance of possession, a point was the least Everton deserved but, once again, they were largely uninspiring apart from a few flashes here and there, one of which yielded their only real chance of the first half.

Koeman had elected to deploy Calvert-Lewin out of position out wide so that Rooney and Gylfi Sigurdsson could operate more centrally, while Nikola Vlasic offered some inventiveness and potential width on the other flank.


And three of those four were involved in the move that ended with Matt Ryan saving from Idrissa Gueye, the Australian palming the Senegal international's low shot aside in the 19th minute.

Prior to that, it had been practically all Everton, as it would be for the first half hour, but there was precious little else for to show for that dominance and the visitors almost gave up parity in the 31st minute from a lazy giveaway in midfield by Gueye.

Knockaert's effort from the resulting corner was blocked and when Lewis Dunk rifled the rebound towards goal from the angle, Michael Keane made the saving block with first his hip and then arm.

Gueye, meanwhile, almost atoned at the other end but his curling shot just missed the far post.

The second half continued in a similar vein and Mason Holgate stung Ryan's palms with a powerfully driven ball from the right side of the box and Calvert-Lewin had a header saved in routine fashion.

Vlasic then had an excellent opportunity as he executed a neat turn on the edge of the box to slide past his marker but he lost his footing as he shot and the ball sliced behind.

Otherwise, it was flat fare until the mostly uneventful contest began to come to life in the final 15 minutes, mostly because Brighton came more into the game, particularly following the introduction of José Izquierdo.

At one end, Calvert-Lewin spurned a gilt-edged chance of his own making after he had brilliantly chested down a cross to evade his man but his left-foot shot was tame at the end of it.

At the other, Jordan Pickford did enough to beat away an awkwardly-bouncing shot from Izquierdo before Keane saved his side with a vital deflection that carried Knockaert's goal-bound shot wide of the far post.

But the substitute was heavily involved in the moment that broke the deadlock in the 82nd minute. It was Izquierdo's shot in front of goal that looked certain to put the Seagulls ahead, only for Pickford to make the save, but when the rebound was worked back to Knockaert in a similar position, he made no mistake.

That should have been enough to ensure that Koeman would undergo another exacting post-match inquest into his team's display but another substitute, Isiah Brown, almost doubled the home side's lead five minutes later, only to be foiled by Pickford's excellent save.

Brighton had been living on the edge as far as referee Michael Oliver's disciplinary action was concerned, not least when Pascal Groß's blatant tug on Sigurdsson in the box went unpunished and they paid for one last indiscretion as the match ticked into the final minute of the regulation 90.

As a free kick was floated into the box from right, Bruno only had eyes for Calvert-Lewin and his elbow to the striker's jaw was spotted by official who pointed to the spot. Rooney stepped up and sent Ryan the wrong way with an expertly-taken spot-kick.

Belatedly energised, Everton almost won it at the death with late introduction, Kevin Mirallas, popped up in the six-yard box but Ryan denied him twice with good, last-ditch saves and Koeman had to be satisfied with a point that moves the Toffees back up to 16th.