Nothing ventured but a point gained 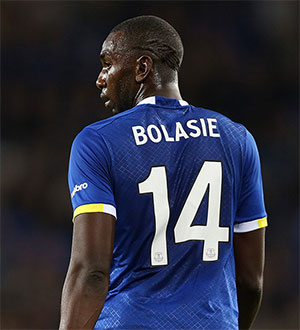 Yannick Bolasie's return after more than a year out and another clean sheet were the most noteworthy things about an otherwise lifeless Everton performance
Everton played out another gritty but uneventful goalless draw at the Hawthorns to add to last Saturday's point against Chelsea.

The Blues' defensive resilience under Sam Allardyce which has helped him remain unbeaten since taking the reins at Goodison Park heading into the final continues but there was precious little to excite the travelling fans in the way of attack against a West Brom side that hasn't won a Premier League game since August.

Allardyce made changes from the team that started against Chelsea on Saturday, deploying Michael Keane, Mason Holgate and Ashley Williams in a central defensive three and replacing the injured Idrissa Gueye with Tom Davies.

The headline from the team selection, however, was the return of Yannick Bolasie after more than a year out with a serious knee injury. The Congolese winger managed an hour before being replaced by Aaron Lennon and while he wasn't able to influence much going forward, he provided some energy, threw in some tricks and tried one curling shot in an otherwise impotent first-half display from the visitors.

It was West Brom who went closest in the first 45 minutes. Craig Dawson had arguably the best one when he headed Matt Phillips' cross over. Chris Brunt also tried one shot from distance that Jordan Pickford did well to hold rather than parry away while Ahmed Hegazi headed a free kick onto the roof of the net.

Salomon Rondon really should have broken the deadlock five minutes into the second half when he shrugged off the attentions of Holgate but slashed his shot horribly wide.

Williams had a looping header comfortably caught at the other end, Everton's first official effort on target for more than three halves of football, before Jonjoe Kenny blocked Brunt's goal-bound effort at the other.

Dominic Calvert-Lewin, who had spent the game in his customary isolated target-man mode, made way for Oumar Niasse in a double change in the 61st minute but Allardyce's side remain unadventurous and woefully bereft of creativity.

Jay Rodriguez dropped a header wide for the Baggies and Davies side-footed over for the Toffees but it wasn't until very late in the contest that the visitors finally sparked into life in an attacking sense.

Niasse had a shot saved well by Ben Foster in the final minute but the game finished 0-0, a result that keeps Everton ninth but sharpens the focus on what plans Allardyce may have to improve the team going forward in the coming weeks.