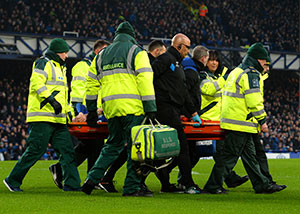 Theo Walcott marked his debut with a vital assist as Everton clawed back a point against West Brom in a game marred by a broken leg sustained by James McCarthy.

Oumar Niasse stepped off the bench to convert the new signing's header just minutes after McCarthy had been stretchered off but it was another worryingly disjointed Blues performance that was greeted by boos from the frustrated home faithful at the end of each half.

The Senegalese striker's goal cancelled out Jay Rodriguez's first-half opener as the Baggies looked to build on last weekend's long-awaited League victory and they almost won it in stoppage time when Salomon Rondon crashed a dipping shot off the face of Jordan Pickford's crossbar.

Sam Allardyce mixed his team up again following last weekend's drubbing at the hands of Tottenham, recalling Ashley Williams to central defence alongside Mason Holgate and pairing Morgan Schneiderlin with McCarthy in a midfield that also included Nikola Vlasic deployed wide on the left.


Yannick Bolasie made way for Walcott on the opposite flank, Cenk Tosun made his home debut while Wayne Rooney was named on the bench. Dominic Calvert-Lewin was rested by Allardyce and omitted from the squad.

It was clear for much of the first half, however, that the addition of more attacking power wasn't automatically translating into a more dangerous Everton going forward as they struggled to create chances.

Rondon had forced one save from Pickford before Rodriguez struck after just seven minutes. Williams was drawn into the opposition half to cover the Venezuelan striker. Grzegorz Krychowiak exploited the gaping hole him left behind him with a deft ball over the top that Rodriguez clipped past the goalkeeper and into the bottom corner of the goal.

Chris Brunt then flashed a cross across goal that narrowly missed the far post, Alan Pardew's men seemingly growing in confidence while Everton tried to establish some rhythm of their play and provide service to the isolated Tosun.

Schneiderlin missed with a header from a Gylfi Sigurdsson free kick but it wasn't until seven minutes before the break that the Blues ended four hours of football without registering a shot on target. Ben Foster grabbed Jonjoe Kenny's shot from the edge of the box out of the air, the young fullback's effort greeted by ironic cheers from the home faithful.

Walcott was looking lively down the right flank but he, too, suffered from a lack of support, with the Blues generally lacking movement and accurate passing. One moment where they got bogged down led to a giveaway in midfield that had McCarthy racing back to make a last-ditch saving tackle on Rondon as he lined up a shot on goal.

Unfortunately, with the ball toed away, Rondon struck McCarthy's leg instead, snapping it on impact and leaving the Irish international stricken on the field before being stretchered off.

With Rondon visibly shaken and the mood in the stadium having taken on a more sombre note, it took a while for the game to settle again. But with the addition of Rooney for McCarthy and then Niasse for Tosun, Everton were able to fashion an equaliser less than a minute after the Senegalese's introduction.

Rooney curled a cross that picked Walcott out unmarked at the back post and his header back across goal was smacked into the roof of the net by Niasse.

The equaliser failed to spark a coordinated rally for a winner by the home side, however, and after Foster had done well to block a goal-bound volley from Walcott, it was West Brom who came closer to grabbing all three points in the final quarter of an hour.

Krychowiak saw a powerful long-range shot parried away by Pickford with Matt Phillips firing over from the rebound. Phillips was then denied by Pickford who fisted his accurate drive away to safety before the Blues' stopper was called into action once more to beat away another shot from Rondon. The same Baggies player then nodded inches wide as the visitors kept possession in the same attack and then struck the woodwork two minutes into added time with the ‘keeper beaten.

The draw halts a four-match losing streak that had started 2018 on a sour note but the performance leaves Allardyce with plenty to work on over the coming fortnight's break before resurgent Leicester come to town.

Everton remain in ninth place in the Premier League but, without a win in over a month, they continue to lose ground on the clubs above them.

Thoughts, meanwhile, will turn to McCarthy who faces another lengthy spell in recovery and rehabilitation just weeks after making his long-awaited return from a hamstring injury.