Boro reportedly in talks over Besic 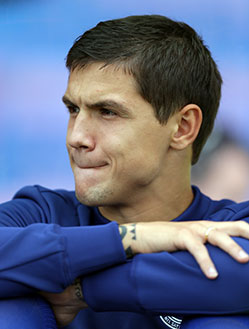 Middlesbrough are said to be trying to negotiate a loan deal for Everton's out-of-favour midfielder Muhamed Besic.

Reports suggest new Boro boss Tony Pulis is targeting the Bosnian who is fit again following hamstring problems but has not been able to get into the Blues' team this season.

His last start for the Blues this season was in the final Europa League group game against Apollon Limassol and he and hasn't figured on the team sheet since November.

Media outlets like Sky Sports and MailSport now claim that Besic could move to the Riverside Stadium for the remainder of the season.

But he has no realistic future at the club as it is very hard to see how he can improve (or motivate himself to improve) on what he is.

Fully aware that he was playing in his second position, I guess the writing was truly on the wall when we saw young Feeney having to continually bollock him during the away game in Limassol.

I do wish him all the best still the same.

Good luck to him. I think he may prove to be one of those who got away. But, when he returns as an opponent, I hope he gets a good welcome.

First he'll have to find his boots.

Then he'll have to clean the cobwebs off 'em.

He has done absolutely fuck all else apart from lose the ball on his debut from the off that led to an opposition goal.

He was signed at a very young age, for potential But it didn't work out, and he's been sidelined by a long-term injury for so long that now I'll be happy for anyone to take him!

He tried hard, and so I won't be jeering him, at all!! He does have the spirit so few of our players this season have shown!

I don't think he'll have a future at EFC, though! So I wish him the best if he can find a new club!

A good move for all concerned. If he goes, I wish him the best of luck, he would be a hero if he contributed to a Middlesbrough promotion.

I had hoped he just needed the rough edges knocking off because I liked his competitiveness. If he can't get a game in a season like this then he obviously isn't doing anything to impress the manager and may as well be sold.

Shaun McGough
17 Posted 29/01/2018 at 22:41:44
He would have made a perfect midfield cog with two or three intelligent midfielders around him and not so many injuries but he may do well elsewhere.

I wish him well as I don't want any chewie stuck in my hair.

Hope Boro is serious. Because this kid is on salary until June 2021.

He'd be a hit over here in MLS, which is his level. But, cult hero notwithstanding, he has no business in the Premier League.

I see this two ways: at least he's too afraid to get stuck in unlike most of our toothless players and hopefully if injury free could be given a chance like others.

Or sell him and stick with the other girls we have and be weak in midfield and defense. Fellaini was just the same too. A yellow card or red waiting to happen.

Personally I'd give Besic till the end of the season and see if he's got what we need as his injuries haven't helped but I think he's better than Schneiderlin and not afraid to get stuck in. Something we clearly lack.

John Maxwell
23 Posted 30/01/2018 at 10:20:32
Anyone remember his first touch at Goodison? I can't remember who it was against and I've tried to find it on YouTube, but sure he tried a flick which resulted in a goal for whoever we were playing.

Shame for the lad, think he showed promise but was unlucky with injuries. He didn't really get a fair crack in the team. How Schneiderlin the crab plays I'll never know.

So it's bye-bye to the Bosnian, maybe.

Gives what he has, hardworking, but does not have much skill.

A lot of this is still down to that Colostomy Bag, Koeman. I know Besic was bought by Martinez, but the rest of the dross we have is mainly down to him.

Get the fax machine warmed up!

West Ham want Schneiderlin on loan, Mirallas gone on loan, Lookman wanted on loan, Besic next... can we have some money, please!!!!

Although I reckon Macca would be more effective on one peg than Schneiderlin is on two.

Besic has to go – he's useless on almost every level. I never understood why he gained such high regard among supporters based on a couple of decent performances for his country and the occasional moment of... errr... something for us.

He's a headless chicken with 'red card' written on his back.

Schneiderlin jumping out of that tackle early doors v West Brom last time out reminded me of our Mo.

He had some of our younger and dare I say, more impressionable fans fooled but let's have it right – snide sleeve tattoos and regularly displaying ill discipline doesn't make you a hard man.

As a previous post mentions, if Tony Pulis wants to buy you,that basically says it all.

Good luck Mo. You are going to need it.

Afterall, it is not easy to both outplay Yaya Toure over 90 mins and leave him sprawling on his arse.

But he never recaptured that height. Unlikely he ever could at Everton, his career here is now stale.

There's a really good player in there somewhere.

Justin Doone
47 Posted 01/02/2018 at 21:31:55
I liked the lad but like so many other young players with potential they need to show consistency and work ethic to improve. Unfortunately, when you suffer so many long term injuries when still developing the chances of making it become very slim. The game hasn't changed and I'll always remember being told you need to learn to use your head as much as your legs.

Sadly this is missing in Mo as it is in the majority of our midfielders. McCarthy, Schneiderlin, Mirallas, Lookman. All have/had potential but never learnt/improved basic decision making skills. Gareth Barry is a great example. Should still be helping us. Will probably make a great coach. His quality remains in his decision making.