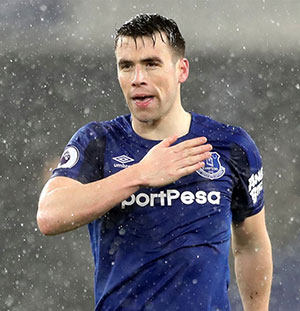 Everton inflicted Leicester's first defeat for the year and registered a first win in 2018 of their own thanks to a brace by Theo Walcott.

The Blues' new £20m signing scored twice in the first half as Everton sparked into life following another lacklustre opening but profligacy by Oumar Niasse in front of goal at one end and a rash lapse by Wayne Rooney at the other combined to leave Sam Allardyce's side hanging on in the closing stages.

Niasse missed a sitter and then squandered a gilt-edged chance to make it 3-0 either side of Walcott's second but it was the penalty that Rooney conceded with 20 minutes to go that condemned the hitherto bouyant Goodison crowd to a nail-biting finale in which the Foxes twice struck the woodwork and had a shot cleared off the line.

Though Walcott grabbed the limelight with the all-important goals, the evening belonged to Seamus Coleman who made a triumphant return from a shattered broken leg 10 months ago to put in a stellar 90-minute performance.

Allardyce made six alterations to the starting XI that started against West Bromwich Albion 10 days ago, dropping his other new signing, Cenk Tosun, to the bench in favour of Niasse, going against his stated opinion that Wayne Rooney and Gylfi Sigurdsson can't play in the same team by selecting them both in midfield, reinstating Tom Davies and Michael Keane, and handing Coleman a place despite the Irishman having only played 58 minutes for the Under-23s.

The changes appeared to have little effect on the performance in the early stages, however, with Everton lacking in both cohesion and direction and overly reliant on high and direct balls aimed at Niasse up front. They managed a rare shot on target early on when Walcott forced Kasper Schmeichel to push a bouncing shot wide but the tale of the first quarter of the contest was one of the home side's weakness defending set-pieces.

Harry Maguire lost Cuco Martina as a corner from the Leicester left was swung in but the Foxes' defender put a free header over the bar while Wilfred Ndidi came within inches of converting from a short corner routine but saw his header come back off the crossbar.

Everton began to settle, however, and when Martina pressured Ben Chilwell and the ball broke to Sigurdsson wide on the right, the Icelandic international cut it back to meet the run of Walcott who tucked a first-time shot inside the post to make it 1-0 with 24 minutes gone.

Niasse should have doubled the lead 12 minutes later, though. Sigurdsson popped up near the byline on the right-hand flank again after good work by Walcott and when his low centre was cleared by Daniel Amartey straight to Niasse, the striker had most of the goal to aim at but he shanked embarrassingly wide.

Walcott led the way again just two minutes later. Keane contested for Rooney's flighted ball into the box and his looping header fell invitingly for the former Arsenal forward who volleyed it back across Schmeichel and into the far corner.

2-0, the Blues were flying and when Leicester botched the subsequent restart, Niasse pounced on the loose ball but was let down by a heavy touch that carried it through to the goalkeeper when a one-on-one showdown would otherwise have been on with the Senegalese player in the clear.

Unfortunately, Everton's momentum did not carry through to the second half which became a much more even affair, even if the Blues, with Coleman, Davies and Walcott dangerous on the counter-attack, were still carrying the greater attacking threat.

Indeed, while his early touches betrayed a bit of rust, Coleman quickly settled back in like he had never been out and seemed to exhibit more intelligence and creativity than before his injury. He teased a number of crafty balls over the head of the fullback in front of him to open up chances, one of which Walcott dragged across goal on the hour mark in search of his hat-trick.

10 minutes later, the Irish skipper raced down the right on the overlap with another fitness-defying raid to collect Walcott's pass but his cross was too close to Schmeichel.

Though definitely in what was often a physical game played in soaking wet conditions, Leicester had largely struggled to make inroads into Everton's defence, with Keane and Jagielka forming a solid partnership at the back. No doubt hampered by the absence of Riyad Mahrez, Jamie Vardy had been non-existent as a threat for 70 minutes but he was gifted the chance to affect the game by Rooney.

The veteran was seen by referee Chris Kavanagh to have pulled Ndidi back in the box and Vardy sent Jordan Pickford the wrong way from the resulting spot kick to cut Everton's lead in half.

That triggered the inevitably nervy conclusion as the home side threatened to fall to pieces under renewed pressure from the visitors. They were saved by the woodwork in the 77th minute, however, as substitute Kalechi Iheanacho watched a deflected effort bounce off the bar before he rapped the rebound off the post.

Two minutes after that, Everton's back line threatened to buckle again when Chilwell's cross skidded through to Matty James but his shot was hacked out of the goalmouth to safety by Martina. And Pickford then flapped badly at successive crosses towards his six-yard box but escaped when Vardy curled well wide of his goal.

Allardyce turned belatedly to his bench with 10 minutes left to withdraw the increasingly ragged Rooney in favour of Morgan Schneiderlin and Sigurdsson for Dominic Calvert-Lewin. And it was the young striker's presence that prompted Schmeichel into miscuing a punch of his own straight to Walcott but his shot from 25 yards was blocked on the line.

The resulting corner was swung right under Schmeichel's bar and his first clear again lacked distance but Keane spurned the chance to put the game to bed with a disappointing header. And Coleman missed a chance to cap a brilliant personal display with a goal in stoppage time but he opted to shoot with his right foot instead of his left and drove well wide after he had cut in from the flank.

Everton were able to see the game out, however, to collect three vital points that move them eight points clear of the relegation zone and just three wins shy of the 40-point mark that usually guarantees safety.