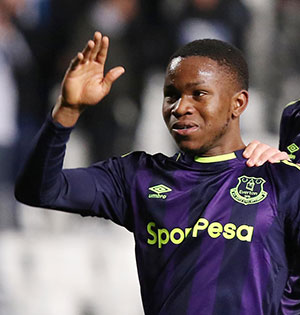 Sam Allardyce has reiterated that he hadn't planned on sending Ademola Lookman out on loan, particularly to a foreign league, while defending Everton's record of blooding young players.

Speaking in his pre-match press conference ahead of tomorrow's trip to the Emirates Stadium to face Arsenal, his first "presser" since the closure of the January transfer window, the manager said he wouldn't guarantee the youngster first-team football but expressed his hope that Lookman gets what he wants out of his loan spell in the Bundesliga.

Lookman, who hadn't started a game for the Blues since the Europa League game against Apollon Limassol in November and had only featured for 38 minutes since the turn of the year, was a surprise deadline-day departure on loan for Red Bull Leipzig, the 20-year-old opting for a move to Germany over a return to the Championship for the remainder of the season.

“I was reluctant to let him go but he insisted,' Allardyce said, echoing his comments following Wednesday's win over Leicester. “So, rather than have a player who was going to have the wrong attitude around the place, he wanted to play some football.

“For us and for him, I wasn't very keen on it based on the fact that we'd already let Aaron Lennon and Mirallas go but he really wanted to get some football.

“We had another offer from a top Championship club but he chose Leipzig so he's got all his choices to go and get some experience and, hopefully, a lot of first-team football in the Bundesliga

“For me, that's a very, very difficult challenge for somebody at such a young age. From a football point of view, he's got a lot of talent but from a cultural and language point of view, he could find it difficult.

“I don't guarantee anybody first-team football here so we've got a huge amount of players fighting for places so even though we've been struggling lately it's been a difficult task getting into the side.

“He hadn't played very much before I got here and it's a consistency level that's the problem. Our inconsistency has been our problem recently, even with the senior players.

“But I've got to keep emphasising this because I don't think it gets enough publicity — whether it's through injuries or because of lack of form from the seniors, we play more youngsters per minute than all of the professional leagues in this country.

“So we do have a lot of youngsters getting into the side and getting huge experience but everybody knows that [the Premier League] is probably the hardest place to play football when you're 21, 22 and under.”