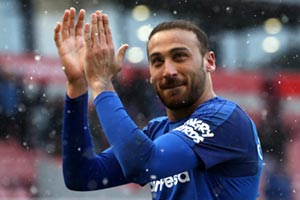 Everton won only their second away game of the season thanks to Cenk Tosun's brace and Charlie Adam's first-half red card.

The Turk scored twice in the second half, once to break the deadlock in snowy conditions at the bet365 Stadium and then to head home the winner after Eric Maxim Choupo-Moting had equalised with 13 minutes to go.

The Cameroon international looked like he might have salvaged a point for relegation-threatened Stoke when he poked home Joe Allen's free kick but with a man's advantage, Everton eventually prevailed when Tosun struck seven minutes later.

With Gylfi Sigurdsson injured, Sam Allardyce was forced to change things in midfield where he brought Idrissa Gueye back into the side after he missed the win over Brighton through illness. The Senegalese international slotted in defensive midfield alongside Wayne Rooney, with Tom Davies given license to push forward between wingers Yannick Bolasie and Theo Walcott.

Everton struggled to get going in a dreadful first half that was not aided by periodic spells of heavy snow that began to settle over two thirds of the pitch. Poor distribution from the back and a general lack of cohesion going forward meant that, not for the first time this season, they failed to register a shot on target before half time.

Davies really should have done, however, when he arrived at the back post untracked to meet a Rooney free kick in the seventh minute but he couldn't keep his header down with almost the whole goal to aim at.

Stoke, meanwhile, weren't much better, although they managed to test Jordan Pickford with a couple of efforts from distance, one from Peter Crouch that the ‘keeper spilled before gathering at the second attempt.

The Potters came into the match sitting in the bottom three and some in their ranks had declared this game as their “cup final” in their bid to beat the drop but their cause was critically undermined by Adam with half an hour gone.

The Scot lunged into a late tackle on Rooney midway inside the Everton half that caught the Blues' midfielder on the ankle and referee Martin Atkinson had little hesitation in brandishing a red card.

The visitors made little headway in making the numerical advantage tell, however, and went into the interval level at 0-0. They would slowly start turning the screw as the second period wore on, however, with Rooney registering a first effort on Jack Butland's goal two minutes after the restart and then forcing him into a routine save just before the hour mark from a direct free kick.

Then, after Michael Keane's missile from 30 yards had been beaten away by Butland, Everton finally put together a move capable of making a breakthrough. Bolasie whipped in a cross from the right onto which Tosun got the merest of glances, Butland could only parry it to Calvert-Lewin but Konstantinos Stafylidis stopped it on the line. Tosun was on hand to rap the loose ball home, however, and the Blues had what should have been the decisive goal.

The were undone, however, in familiar circumstances from a set-piece. Gueye was penalised for pulling back his man and when Allen dropped the resulting dead-ball delivery into the space between Pickford and his back line, Choupo-Moting stole in to plunder the equaliser.

Everton were able to wrestle the initiative back and after Walcott's had let himself down with poor touch to control Tosun's clever ball behind the Stoke defence and Butland had had time to save his eventual shot, Tosun himself scored the winner with his fourth goal in three games.

This time Walcott was the provider with a cross from the right that Tosun anticipated and stooped in ahead of Ryan Shawcross to power the ball into the corner.

The victory, Everton's first on their travels in three months, finally lifts Allardyce's side to the 40-point threshold that usually guarantees safety from relegation.

Though the performance left much to be desired — even allowing for the conditions, which veered from bright sunshine to near blizzard, it was very poor at times — the manager's only concern will be those three points and the end of a run of six games without an away win in all competitions.