Dowell looking for his chance at Everton 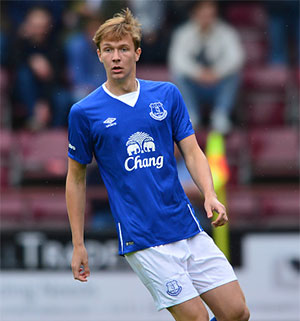 Kieran Dowell says he would "love" the opportunity to make the step at Everton but would consider returning to Nottingham Forest on loan for next season.

The 20-year-old midfielder has spent this season at the City Ground furthering his development having shone at Under-18 and Under-21 level for the Blues.

He made a dream start in the Midlands, too, attracting plaudits from his manager and Championship observers and the adoration of Forest fans and has, in all, notched nine goals in 31 league appearances, including a hat-trick against Hull City last October and weighed in with a number of assists.

Since helping Forest into the fourth round of the FA Cup (where they lost, coincidentally, to Hull) at the expense of Arsenal in one of the highlights of the third round, Dowell's form has gone off the boil somewhat following managerial change at the club.

Former Middlesbrough manager, Aitor Karanka, was brought in to replace Mark Warburton and Dowell hasn't yet been able to replicate his sparkling form from earlier in the campaign playing in a wider role under the new boss.

Nevertheless, having won the Under-20 World Cup with England last summer, the Ormskirk-born player is now part of his country's Under-21s set-up and played in yesterday's 2-1 win over Romania where he impressed manager Aidy Boothroyd.

"He was excellent," Boothroyd said. "In the last four months, since I last seen him, he's filled out a little bit, and looks more mature.

“I know he's been playing some great stuff for Forest.

There are also high hopes at Finch Farm that Dowell can be the next player off Everton's impressive Academy production line, with supporters hopeful he can make the breakthrough into the first team next season.

A brilliant striker of the ball from distance with great movement and an eye for a pass, he has long been seen as future Toffees star in the making but much may depend on who is in charge at Goodison over the close season.

“I'll see what happens in the summer,” he says in the Nottingham Post.

“Obviously, if I'm in Everton's plans then I'd love it, but if not I wouldn't rule out [returning to Nottingham Forest].”