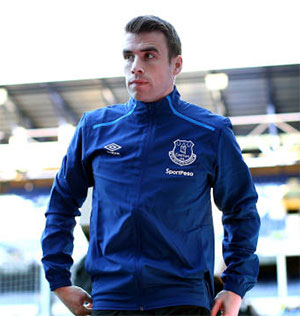 Everton let slip the chance to register back-to-back away wins for the first time this season as they allowed Swansea to claw back a point in their battle to beat relegation.

The Blues were leading by a solitary goal, scored somewhat fortuitously when the ball bounced off Kyle Naughton and over his own goal line late in the first half, when pressure from the home side told and Jordan Ayew slammed home from the angle with 19 minutes to go.

Swansea started the day outside the drop zone and four points clear of safety but were chasing a fifth successive home win in the league to put further breathing space between them and the bottom three. Carlos Carvalhal's men began the game with the requisite energy and determination, harrying and hassling the Blues' players in possession before carving out the best chances of the first half hour.

A poor tackle in midfield from Wayne Rooney as Swansea broke from defending a corner at their end allowed Andre Ayew to sprint through the retreating away defence, lay it off to Tom Carroll who set the other Ayew up for what looked to be the opening goal. Jordan's placed shot after evading Idrissa Gueye looked destined for the bottom corner but it took a decisive deflection off Leighton Baines.


From the resulting corner, Federico Fernández met Carroll's delivery from the right and powered a goalbound header but Cenk Tosun manning the near post headed off the line.

Belying their lowly position, the Swans were moving the ball quickly and decisively, in contrast to Everton's ponderous approach, and a rapid passing move that ended with an interchange between the Ayew brothers ended with Andre wasting a good chance when he fired straight at Jordan Pickford in the 26th minute.

The visitors started to come more into the contest as half-time approached, however, with Yannick Bolasie registering their first shot on target with a tame effort in the 34th minute and Michael Keane planting a header wide of goal after Lukas Fabianski had pushed a header from the Everton defender into the air.

Then, two minutes before the break, the Toffees scored. Seamus Coleman attacked the home penalty area when he collected a lay-off from Tosun and clipped a cross to the back post that Bolasie met with a first-time shot. Fabianski parried the winger's effort, Gueye tried to turn the rebound home, the goalkeeper was on hand to block again but the ball hit Naughton and was over the line by the time Alfie Mawson hooked it clear.

Swansea set about wiping out Everton's advantage early in the second half but were frustrated by Pickford. Michael Keane's header off a deep throw-in fell invitingly to Carroll but the Blues' keeper saved his guided header with a neat, diving catch in the first minute after the restart.

Five minutes later, Andre Ayew was played into the box by his brother but, having engineered space for a shot, his effort was batted behind by Pickford at his near post.

Everton remained frustratingly unproductive going forward but did fashion a clear chance shortly before the hour mark when Theo Walcott picked Gueye out with a cross from the right but he made a mess of the header.

With their need greater and Allardyce showing little desire to make attacking substitutions to kill the game off, Swansea kept pressing for an equaliser and were eventually rewarded.

Tosun again had to be alert by the post to head Mawson's header off the line but when Everton couldn't get the ball away and Coleman's scuffed clearance dropped to Carroll, he found Jordan Ayew free in space and the Ghanaian forward rapped a crisp shot in off the far post.

Everton came within inches of restoring their lead four minutes later, however. Tosun centred a return ball to Coleman in front of goal but his shot on the slide cannoned off the face of the crossbar.

Swansea substitute, Tammy Abraham, smashed their best chance of the last quarter hour high off target at one and while Rooney fired a direct free kick disappointingly over the bar at the other as the two sides had to settle for a point.

The draw, combined with Burnley's latest home win, effectively ends Everton's fading hopes of finishing in seventh place and leaves overhauling Leicester in eighth as the last remaining goal for a frustrating season.