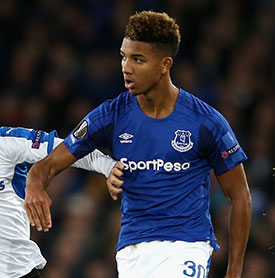 With Phil Jagielka suspended, Mason Holgate gets the nod over Kurt Zouma to start in central defence.

Marco Silva orchestrated a splendid start to his first home Premier League fixture as Everton put two finely worked goals past Southampton in a bright and expansive first half. The Saints pushed back in the second half but Walcott should have wrapped it up.

Mason Holgate retains his place in defence for the suspended Phil Jagielka. Otherwise, Everton are unchanged, with no other new signings starting, except the dynamic Richarlison, who is sure to receive a massive Goodison Park welcome. Seamus Coleman is Captain.

Kurt Zouma is the only new face on the bench, where Ademola Lookman is named for the first time this season.

After a fine welcome for the team and the new manager, the visitors kicked off. Everton's early passing was questionable at best, Walcott and Gueye not following the plan, but there was an intent to move the ball forward more quickly.

A blocked shot from Austin spun away for an early corner that went straight to Pickford after being played short. Sigurdsson was fouled, he delivered a very fine ball for Richarlison to power a header at McCarthy. Another deep free-kick followed, Tosun connecting in the Dee.

Neat work down the left saw Baines win a corner smartly, Sigurdsson, floating it deep for Gana running in to volley, but it was blocked. Everton looked so much brighter than last season, Tosun and Richarlison trying to create something that Walcott spoilt with a sloppy touch.

A free-kick for Southampton exposed the Everton defence, though, Austin getting on the end of it but heading wide when he could easily have threatened the Everton goal. Fine defensive work by Richarlison was warmly appreciated by the Goodison faithful.

Sigurdsson was clipped, this time much closer to the Soton goal, the Islander yielding to Baines, whose smart routine brought a cleverly worked goal from Walcott off a brilliant touch by Schneiderlin. Textbook brilliance thanks to Marco Silva!

Another foul, this time a yellow card for Hoedt, and another fine delivery, met again by Tosun but straight at McCarthy. Schneiderlin was clipped, Lemina getting a yellow card also.

At the other end, Ings got ahead of Keane but his shot was wayward, as Schneiderlin went down again, clutching his hamstring, Tom Davies coming on for him.

An astounding shot from Cedric caught out Pickford and there was Ings to volley hard but incredibly Pickford got a firm had to it forcing the ball up onto the face of the bar, with the goal gaping, but it was a poor spill by the England No 1.

Richarlison spun and twisted horribly, pulling his groin badly, while Southampton galloped away and forced Pickford to come out, with questions of a foul on Austin. Thankfully, Richarlison resumed.

But some absolutely top-notch passing down the right between Gueye, Coleman And Walcott brought the second goal in excellent style, a beautiful cross from Walcott powered home by Richarlison. Pure class from Everton.

Baiens was horribly sold short by a poor pass from Gueye that led to a rare Southampton corner, Ward-Prowse putting in a very fine ball and a totally free header for Ings that he incredibly put wide. Another stark warning to the sleepy Everton defence.

Romeu cynically chopped down Richarlison after the Brazilian had produced a lovely moment otherwise classed as 'showboating', Baines putting in the free-kick and Tosun first to it but no clean contact.

Fine work by Sigurdsson in winning the ball was spoilt by a heavy pass forward. But the movement, desire, and speedier passing from Everton, looking to go forward in the beautiful Goodison sunshine was a thing to behold.

Another deep set-piece, Sigurdsson, swinging it in brilliantly but this time a defender was first to head it behind. Sigurdsson's corner was met awkwardly by Richarlison. In the follow-up, Cedric took out Richarlison, Lee Mason correctly playing advantage, and showing Southampton's 4th yellow card of the half 5 minutes later.

Some tricky footwork by Davies invited a foul from Austin but Baines's delivery was too deep. Lemina fired well wide at the other end to underline the balance of the first half very much in Everton's favour despite a somewhat charmed life for the Everton goal — the scoreline could so easily have been 2-3 instead of 2-0!

Tom Davies kicked off the second half, Tosun getting forward down the left. Bertrand got behind Coleman a little too easily and his cross won a corner, Keane defending well. It was a little scrppy until Tosun and Richarlison exchanged passes and advanced with intent down the left. But things kept breaking down.

Southampton showed more desire, and won a corner that was unsurprisingly powered home by Danny Ings to put them back in the game thanks to dreadful zonal marking after a slow and faltering restart from the Blues.

Lemina went in a little hard on Gueye, conceding another set-piece that almost came off, Walcott not quite alert enough to convert. Stephens trod on Tosun's foot, but was off the field for the free-kick which came to nothing and the visitors mounted another threatening attack.

Everton realised they needed to do more and pushed a little harder, Richarlison again going to ground, this time a clip to his foot that seemed to be nothing, but plenty of treatment was required.

Southampton continued to press for their equalizer, whole Everton looked a little better with a slick pass from Richarlison through the middle that almost set up Tosun. But everything they did, Southampton kept coming back at them.

Finally, a nice move saw Walcott finish cleanly off a great cutback from Tosun, only for him to have been ruled (wrongly) offside. Walcott got another chance off a brilliant exchange with Sigurdsson but he incredibly drove wide.

Another threatening cross saw Holgate head behind above Ings, but more unwanted warnings and another strong chance for the Saints.

Everton were trying to play the same bright football going forward but it just wasn't working and Silva finally decide to switch out Tosun for Calvert-Lewin, the Turk getting a fine round of applause.

It became a little scrappy, Long fouling Gueye, then Pickford having to come out and high-kick a ball, connecting with Ings on the follow-through, ripping the Liverpool man's shirt and leaving some nice red stud marks across the tramp-stamp tattoo on his lower back.

A free-kick fired in by Ward-Prowse forced an unconventional but ultimately effective punch of the ball into the ground and behind off a Southampton player, with Everton still looking uncomfortably shakey and unable to get that vital third goal. A third bookable offence by Lemina was ignored by Lee Mason.

Coleman did his best to create something from a decent cross but it just was not happening, Calvert-Lewin was next to be released but he elected to cross carefully between two Everton attackers. Gueye then shot low, forcing a save.

A poor sign of Everton's frustrations was a deep free-kick played to no-one, Richarlison was then withdrawn for Oumar Niasse, the final ploy. Niasse almost broke through but Coleman spoilt the move this time with a wayward cross.

Walcott tried a classic strike from the corner of the are but overhit the ball as Everton looked to play out 5 minutes of added time. But more pressure from Mark Hughes's side kept hearts in mouths and few in the crowd brave enough to leave before the final whistle.

A final set-piece for Everton was wasted by Gueye, played straight to a defender, Southampton advancing from the second ball but the game finally ended with the Blues victorious after a massively testing second half.