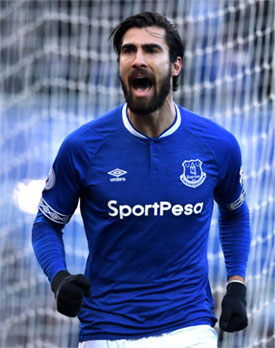 André Gomes's stunning first goal for the Blues was rendered meaningless by another shocking defensive performance that saw Wolves win comfortably by a two-goal margin.

The Portuguese midfielder rocketed home a welcome first-half equaliser to erase Ruben Neves's early penalty but Raul Jimenez restored the visitors' lead just before half time and Leander Dendoncker ended the contest in the second half with an emphatic finish.

Hoping to build on Tuesday's victory at Huddersfield, Marco Silva made one change to his line-up, bringing Theo Walcott into the XI for a rare start in place of Bernard and retaining Tom Davies in midfield with Idrissa Gueye still absent with a minor groin problem.

Leighton Baines started again at left back despite the fact that he had had to be substituted at the John Smith's Stadium with a rib injury and it was a decision that appeared to backfire in only the seventh minute.

Still not moving fluidly, the veteran was out-muscled as Matt Doherty drove into the box and then tangled with the Wolves man's legs, bringing him down and handing Ruben Neves the chance to open the scoring by sending Jordan Pickford the wrong from the spot.

Everton almost found themselves 2-0 down six minutes later when Diogo Jota was sent away behind the home defence with a flighted ball over the top from Conor Coady but Pickford was off his line quickly to snatch the ball off the forward's toe.

Gylfi Sigurdsson had the first sight of goal for Silva's team with a quarter of an hour gone when Cenk Tosun was fouled just outside the Wolves area but drove his free kick into the defensive wall but that was followed by another close call at the other end.

Davies lost possession cheaply in midfield and Jimenez was played in but Pickford made another important save and Dendoncker was prevented from seizing on the rebound as the Blues' defence got back to cover.

Everton began to improve, however, and had their best chance to that point in the 24th minute when Sigurdsson played an excellent pass between two defenders to Walcott but Rui Patricio covered the angle and blocked his shot.

Three minutes after that, however, an even better move paved the way for Gomes to open his account. Sweeping a cross-field pass wide on the right to Seamus Coleman in the first place, the on-loan midfielder continued his run to collect a lay-off from Tosun and advance just inside the box before smashing an unstoppable shot past the keeper to make it 1-1.

What should have been a catalyst for the Blues to take further control of the game was erased, however, a minute before the interval. Coleman had already prevented Wolves from re-taking the lead as he scrambled back to snuff out a chance for Jota on the counter-attack but his efforts were undone by another unnecessary foul and poor set-piece defending.

Michael Keane inexplicably pulled Jota back by the arm 15 yards outside the Everton area and when Joao Moutinho lofted the resulting free-kick forward, Jimenez rose unchallenged to steer a header inside Pickford's right-hand post.

With Jonjoe Kenny on as a 36th-minute replacement for the struggling Baines, Everton set about trying to get back into the game in the second period but were let down by abysmal passing in dangerous areas in front of their back four.

Gomes was rescued by his defence after giving the ball straight to a gold-shirted player but Coleman was not so fortunate in the 66th minute. Trying to play a short ball to substitute Ademola Lookman, the Irishman's pass was easily picked off and the visitors quickly got it to Jota whose initial effort was stopped by a brilliant sliding block by Zouma but Dendoncker seized on the rebound and volleyed high into the goal.

A lengthy break caused by the entrance of black cat (later revealed as Jack who lives in one of the houses near the ground) who ran back and forth across the pitch before eventually being ushered off by stewards afforded Everton a few moments to collect themselves but they were a beaten side at this point.

Dominic Calvert-Lewin was thrown on in place of Coleman and he would force the only meaningful save of the second half from Patricio with a header from Kenny's cross but the rapidly emptying seats around Goodison Park told an all-too familiar story of futility and dejection.

The defeat, Everton's third in their last four at home in the League, moves Wolves five points ahead of the Toffees in the table and once again puts the pressure back on Silva's shoulders, with questions persisting over his defensive organisation and his team's generally soft centre.

The visit of Manchester City in midweek will pose an even tougher test for the fragile confidence of his charges.