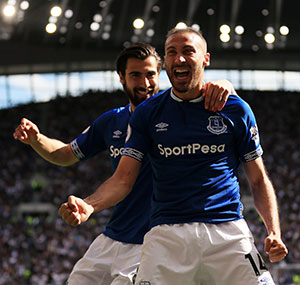 Everton came close to ending an 11-year wait for victory on Tottenham's home turf and finishing their season on a high but were denied by Christian Eriksen's strike from a free kick.

The Blues had recovered from a calamitous start where their set-piece vulnerabilities resurfaced to level the game with 21 minutes to go and then take a 2-1 lead three minutes later but André Gomes's clumsy foul on Erik Lamela outside the box set Eriksen up to earn a point for Spurs.

With Seamus Coleman missing with a minor groin strain, Marco Silva opted for a three-man back line that included Yerry Mina but the Colombian was at fault from the first corner of the game. Having inexplicably headed the ball behind in the first place, he failed to get proper contact with his head as the set-piece came in and the ball fell for Eric Dier to slam home from close range with just three minutes gone.

Michael Keane had a good chance to equalise in the 10th minute but could only steer his header straight at Hugo Lloris and Theo Walcott forced another save from the Frenchman with an effort that he managed to get off despite losing his footing.

Despite being overrun at times in midfield, Everton continued to have the better chances and Bernard almost sneaked a shot inside Lloris's near post but the keeper managed to get down and keep it out before stopping Gylfi Sigurdsson's powerful drive.

The game lapsed into a more typical end-of-season pattern for much of the second half after Walcott had seen a half-volleyed effort blocked and it didn't look it was going to be the Toffees' day when Bernard squandered their best result thus far when he stabbed Cenk Tosun's knock-on wide.

The game came back to life in the 69th minute, however, when Walcott popped up in space in the box to receive Sigurdsson's pass after good work. by substitute Ademola Lookman to fire the equaliser inside the far post.

Three minutes later, the Tottenham Hotspur Stadium was silenced when Everton took the lead. Keane rose higher than anyone to meet Sigurdsson's corner from the left and while Lloris stopped the defender's header on the line and Lookman couldn't convert the rebound, Tosun eventually bundled it over the line.

The advantage would last less than two minutes, though. Everton's defence opened up as Spurs attacked with Lamela bearing down on goal and Gomes brought him down a few yards outside the penalty area. Eriksen lined up a direct free-kick that he arrowed through a gap in the defensive wall and past the unsighted Jordan Pickford.

Tosun had a late headed chance that he planted straight into the goalkeeper's arms as Everton pressed for a winner but ultimately they had to be content with a point.

The result, combined with Leicester's draw with Chelsea, ensured that Silva's Blues finished the season in eighth place for the second season running, three points behind Wolves who claimed seventh.