127 years ago Everton unveiled its new stadium at Mere Green – it would become known as Goodison Park on account of its proximity to Goodison Road. The first football match would take place on 2 September - a friendly against Bolton Wanderers. Athletic News was on hand to report on developments.

Billy Smith has been a royal blue bloodhound for many years, sniffing out historic articles about our beloved club in microfilm archives across the region. These nuggets are posted on his excellent Blue Correspondent website (bluecorrespondent.co.uk). Working chronologically, he has reached the 1962/63 season but Billy continues locate and transcribe previously hidden gems from earlier eras.

One vein of high-quality content mined by Billy is Athletic News (The Athletic News and Cyclists' Journal, to give it its full title). This Manchester-based weekly newspaper, which ran from 1875 to 1931 was a keen proponent of Association Football in its early decades.

127 years ago Everton unveiled its new stadium at Mere Green – it would become known as Goodison Park on account of its proximity to Goodison Road. The official opening consisted of a visit by dignitaries (preceded by a celebratory meal at the Adelphi hotel), some athletics events in which Everton players participated and a firework display. The first football match would take place on 2 September - a friendly against Bolton Wanderers. Athletic News was on hand to report on developments.

Below are my slightly abridged versions of two articles (that Billy transcribed from microfilm). about the specifications and opening of the new ground. The reporters’ observations are fascinating and might inspire Dan Meis and team in their detailed design of our next home (although one hopes that a fortification and sound-proofing of the referee’s office should not be required). 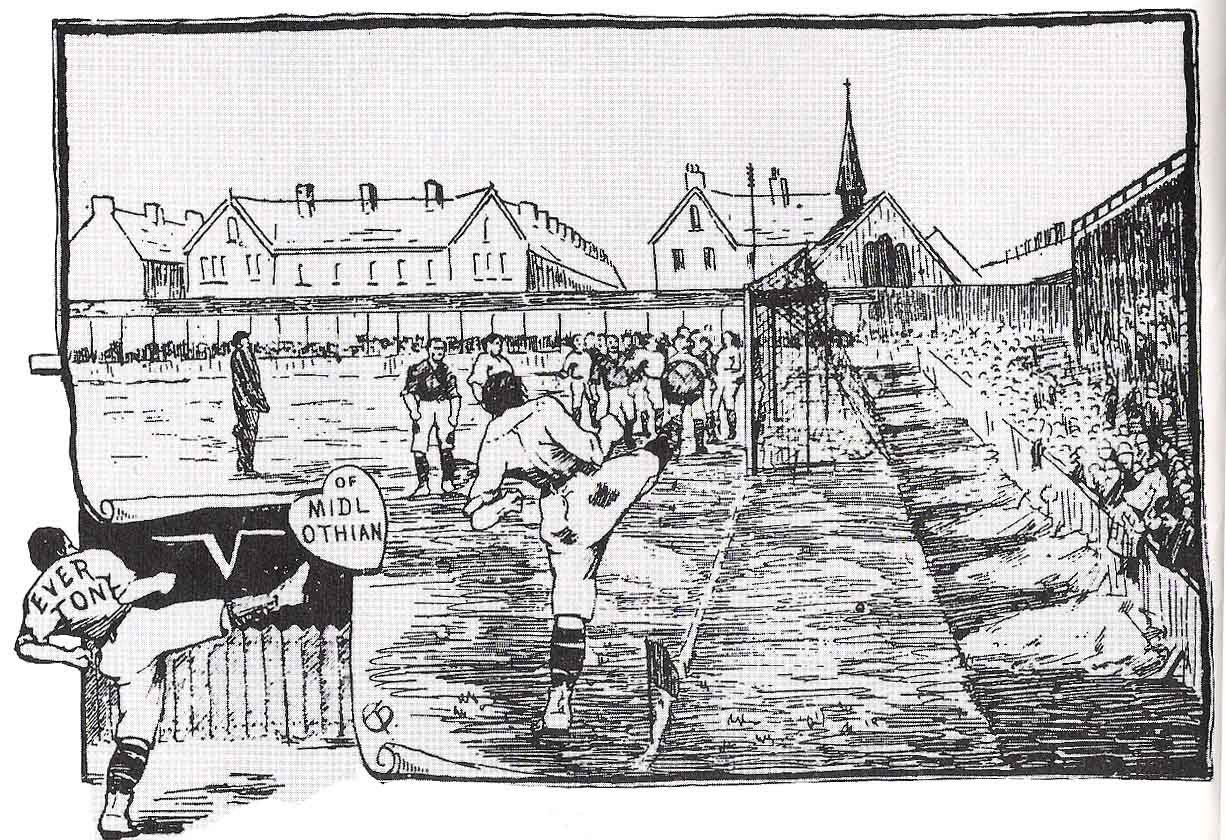 The Everton Club are quietly setting their house in order and invited several members of the local press to the new Goodison Road ground, with the object of allowing them to select the position for the new press box.  Already one Liverpool paper has arranged for a telephone and any reporter who prefers solitude can have a private box all to himself.  In fact, Goodison Road people intend to do the thing well, and are not only having fine dressing rooms for the teams but the referee will have one for his especial benefit, wherein he can seek seclusion from the compliments and other more substantial things which are thrown about when that all important official has failed to give satisfaction to the home spectators.

The idea of providing a separate dressing-room for the referee has its advantages; for it is not pleasant to hear certain remarks from the players when you are divesting yourself of your official attire, and donning the everyday garb of civil life.  With nothing on but your shirt, for instance, you feel a loss of dignity which prevents you arguing knotty points in a manner which becomes a ‘Saturday Afternoon Emperor’. The idea of reserving private apartments for a referee is to be commended, and might be followed by other clubs.

THE NEW HOME OF THE EVERTON CLUB

Everton have been visited by a real live lord, and that lord was the president of the Football Association.  Yes, Lord Kinnaird has been to Everton and has congratulated the executive… on their new ground.  Of course, this was chiefly done in an after-dinner speech, but Lord Kinnaird is not the man to trot out flattery as the result of a good dinner and, to my mind, Mr. Mahon and his committee deserve every credit for the manner in which they set to work to provide a new home for the Everton Football Club.

It would serve no useful purpose to go through the reasons why a new ground was necessary, but it was, and on Good Friday Everton commenced the gigantic task of converting a mud heap into a passable football ground.  I am assured that the piece of land at Goodison Road, which has been secured at a rental of 50 pounds a year on a seven years’ lease, was a veritable wilderness six months ago, and the levelling up process has taken an average depth of 4 and half feet of cinders in order to make it level.  This being done, the next question was the turf, and that had to be good, for it would have but a few short weeks to get knit together, as it were, before being required for active service, for the first match on the ground is fixed for Thursday next. I understand the sod was brought from Aintree, but that matters little. It is now in exceptionally good order, and with the excellent drainage which the cinders give, it ought to wear well.  There were, however, other matters to attend to in addition to the playing portion, and first of all the wilderness was enclosed with hoarding something like 12 or 15 feet in height, and then the stands were erected.  Quoting from the official description, the actual size of the field of play is 384 feet by 255 feet, and this makes something like two and one third acres; but the total area of the ground taken is five and a half acres, and this is enough land for any respectable club to have at an annual rental of 50 pounds.

The executive naturally expects a few spectators, so they have provided accommodation for 40,000 to be going on with.  It is easy enough to write 40,000 and I must confess that I was under the impression that in their zeal my Everton friends have been exaggerating somewhat. But a visit on Wednesday convinced me that they had not, and in my opinion, with sufficient banking – and the Everton people speak of a thousand load of cinders as if it were a truck load - it is quite possible to put 50,000 inside the immense hoardings.

Now as to the stands: The covered one opposite Goodison Road is, according to the official description, a ‘well-built and imposing one of its kind.’  At any rate, it is a very comfortable one, although a person of aldermanic proportions might find some difficulty in walking between the seats.  The entrances are at the back and you therefore go down to your seat.  Nice, warm cushions are there for the reserved people, and this portion is in the centre of the ground, for the stand runs the whole length of the touchline.  Behind each goal are open stands 270ft each in length and these will hold 10,000, provided the spectators do not get too excited and will be content to stand still during the process of the game - which they won’t.

I forgot to say that the covered stand has 13 tiers, and the only objection is that on the top seat the unfortunate occupants will have some difficulty in following the play on a dark, dismal day; and it is this spot which the Press have selected to enable them to give a true and faithful account.

Going down the staircase we find a cinder track, on which the players may do a sprint, and then we are introduced to the dressing rooms (two) and a bathroom for each team, fitted-up with lockers.  The baths are not the ordinary iron painted affairs, but are built of substantial timber, and about half a dozen can use them at the same time.  The next room is nicely fitted-up for the referee, and this is not only an original idea but a good one, for the much-abused official can now retire from field and dress in solitude, without being compelled to overhear uncomplimentary remarks about some of his decisions.  The door is fitted with a substantial lock, and, if necessary, the directors are prepared to have it coated with sheet iron.  At any rate, they have done all they could to make the referee comfortable.

They have not put down a running track, being of opinion that the nearer you can get your spectators to the play the more your spectators will appreciate it; but, all the same, a good track on a popular ground would have done well.

I might mention that the publicans in the neighbourhood are fully alive to the necessities of trade. They are making extensive alterations for the sale of liquor and are spending a small fortune on paint of various hues.  I must confess to an ignorance of the geographical position of the ground, but from what I was told there are stations to the right of it, stations to the left of it, and, in fact, all round it.  The tram takes you to within a hundred yards of the entrance.

Mr. Prescott is the discoverer and architect and he has been assisted in his work by Messrs Kelly Brothers, of Walton, while the gentlemen who claims to have made the turf of bowling-green excellence is Mr. Barton.  But, without an energetic committee like Mr. Marlow, Mr. Clayton, Mr. Griffiths, Dr. Baxter, Mr. Molyneux and others, no number of architects, builders, and turf manipulators could have made Goodison Road into one of the best football grounds in the country in the short space of five months.


John McFarlane Snr
1 Posted 09/09/2019 at 22:17:27
Hi Rob, Yourself and Billy, are to be congratulated on the quality of your article, I hope sufficient 'ToffeeWebbers' take the time to read it, which would make your efforts worth while.

I know that you'll probably view it as a labour of love, I also believe that your articles don't receive the appreciation they deserve. Speaking as one who is immensely proud of our history, I can only thank you for your dedication and commitment.

What vision and foresight our committee had in seeing this formidable project to fruition.

he book 'Goodison Glory' states that, "The original church of St Luke the Evangelist is clearly visible. This was a temporary structure that was eventually re-sited in Blowick near Southport, making way for the present church in 1901"The alignment therefore, was [as it is today] with the goal areas in the Park End and Gwladys Street.

Find out how to browse ad-free and support ToffeeWeb
© Rob Sawyer. All rights reserved.