Everton hold their nerve to win gripper against Wolves 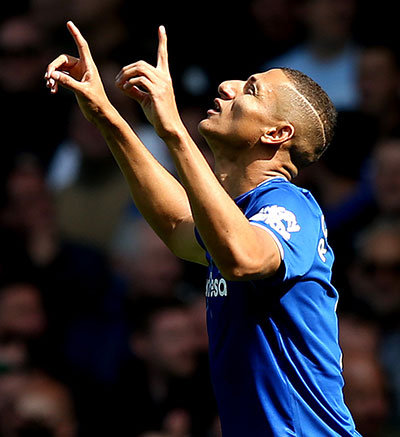 Everton stretched their winning sequence at home to six games as they edged Wolves in a pulsating encounter at Goodison Park thanks to Richarlison's terrific header.

Two expansive teams managed by Portuguese managers went toe-to-toe in a match that lived up to its pre-match billing and delivered five goals, the decisive one coming 10 minutes from time after Raul Jiminez had brought the visitors level five minutes earlier.

The Toffees were made to fight all the way by Nuno Espirito Santo's side after taking the lead just four minutes in when Moise Kean forced a mix-up between Conor Coady and Rui Patricio and Richarlison fired home the loose ball.

Wolves were level within four minutes, though, as Adama Traoré drove past Lucas Digne, his cross wasn't properly dealt with by Seamus Coleman and Romain Saïss pounced to bury the ball past Jordan Pickford.

Stabilised in midfield by the vastly improved André Gomes and driven forward by a combination of impressive home debutants Fabian Delph and Alex Iwobi, Everton stuck to their task and were back in the lead almost straight away.

Richarlison played Gylfi Sigurdsson in down the right flank and he whipped in a cross that Iwobi met with his head and guided past the goalkeeper to make it 2-1 with just 11 minutes on the clock.

Pickford pulled off an excellent reaction save at his near post to deny Saïss a second equaliser a minute after the restart before Coleman's shot was blocked behind and Yerry Mina headed too close to Rui Patricio from a corner after Sigurdsson's cross had just eluded another player making his first Premier League start in the form of Moise Kean.

Everton carried their strong performance into the second half after a long period of stalemate, Wolves started to come more into the game and one Ryan Bennett long throw into the “mixer” proved too many for Silva's back line in the 75th minute. The defender launched the ball into the box, Mina mis-judged the flight allowing Willy Boly to nod on and Jiminez stooped to head in at the far post, taking Digne's boot to his face in the process.

That put the game on a knife-edge heading into the last 10 minutes as Wolves, who had introduced key men off the bench in the form of Joao Moutinho and Diogo Jota, looked just as capable of grabbing a winner as Everton.

It was the home team who would grab the points, however, with another excellent goal fashioned from the left by Digne. The Frenchman powered his way towards the corner flag where his marker assumed there was little danger but a deep cross invited a towering jump by Richarlison who steered the ball beyond the despairing glove of the keeper.

Everton would have put the match to bed in the closing stages were it not for two great saves from Rui Patricio. First, he reacted well to push Richarlison's curling left footer away to safety; then he pulled off an even better stop by palming Mina's header to the side to keep alive the visitors' hopes of salvaging a point.

The Blues shut the game down in the final few minutes, though, and the last act was that of referee Anthony Taylor who dismissed Boly for a second bookable offence after the defender had cynically blocked Richarlison off as he tried to surge down the touchline deep into stoppage time.

The win moves Everton into the top six heading into the international break but, more importantly, it represented the successful passing of a test of character for Silva's team after their disappointing showing at Aston Villa nine days ago and twice seeing their lead wiped out this afternoon.