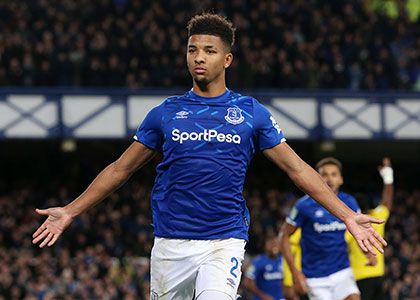 Everton are into the Carabao Cup quarter-finals after eventually prevailing against struggling Watford thanks to Mason Holgate's breakthrough 18 minutes from time.

The defender headed home Theo Walcott's cross to register his first goal for the Blues and set them on the way to a largely uninspiring victory that was rounded off by Richarlison's break-away goal in stoppage time against his old club.

Needing a response to the demoralising defeat at Brighton on Saturday, Marco Silva made further changes to his line-up, replacing Walcott with Moise Kean for a rare start, restoring Seamus Coleman and Fabian Delph to the starting XI at the expense of Djibril Sidibé and Tom Davies, deploying Dominic Calvert-Lewin up front, and bringing Yerry Mina back into the defence after injury… prematurely as it turned out.

Mina would last just 41 minutes of a turgid first half that featured very little of note and had to come off with a recurrence of the knee injury that had kept him out of the Brighton game.

His towering presence was replaced by Michael Keane while Kean was, somewhat harshly, withdrawn at the interval in favour of Walcott, a decision that would reap rewards for Silva in the second period.

Walcott injected some experience and nous to the right flank as Everton gradually grew into the match as an attacking force after half-time and particularly after Andre Gray had stung the palms of Jordan Pickford with the first real shot of the evening.

The Hornets' attacker picked up a fortunate bounce around 25 yards from goal and hammered a shot that the goalkeeper did well to beat away but as the hour mark ticked by, the home side started to make inroads at the other end.

First, Keane headed a great chance straight at Huerelho Gomes from a free kick. Then André Gomes had a shot cleared off the line following a great run by Richarlison down the left and Alex Iwobi curled a shot off the face of the crossbar from near the penalty spot as Everton got closer to breaking the deadlock.

Digne saw a deflected free-kick also bounce off the top of the woodwork before the Toffees' quality and pressure told on Watford. Iwobi got the better of Gerard Deulofeu, who had come on shortly beforehand as a substitute for the visitors, and following some great footwork dug out a cross that just eluded Holgate.

Walcott picked the ball up on the far side of the box, however, and put a neat ball into the six-yard box where Holgate was free to head home from close range.

Watford's attempts to get back into the game were fairly tepid against an Everton side that now looked fairly comfortable and when Deulofeu's attempted shot from outside the home area was blocked by Keane, the ball broke to substitute Cenk Tosun and he sent Richarlison galloping away with just one defender back.

The Brazilian surged into the box, cut back inside his man and then lashed the ball past his compatriot Gomes in the opposition goal to seal Everton's passage into the last eight.