Spirited Blues dealt another hammer blow at the death 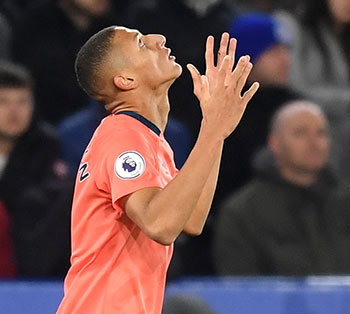 Everton fell to their eighth defeat of the season but it came in cruel circumstances in stoppage time at the King Power Stadium when Kelechi Iheanacho's goal was eventually ruled as legitimate by VAR.

The Blues had taken the lead in the 23rd minute when Richarlison finished off a fine move by crashing a header past Kasper Schmeichel and they had done a laudable job of frustrating the high-flying Foxes before they were picked apart with 22 minutes to go and Jamie Vardy equalised.

A hard-earned share of the spoils seemed to be Everton's reward for a committed performance but when Tom Davies's loose pass was seized upon by Leicester in their own half, Iheanacho was threaded into fire past Jordan Pickford. It looked initially as though the visitors had been saved by the offside flag but a check by the Video Assistant Referee concluded that the striker was onside.

Seeking a response to last Saturday's home loss to Norwich and needing to make allowances for injuries, Marco Silva recalled Michael Keane, Dominic Calvert-Lewin and Alex Iwobi and deployed three centre-halves with Morgan Schneiderlin, his only remaining available defensive midfielder, not deemed fit enough to start because of a knock that had threatened to rule him out altogether.

And the early signs were that Silva's strategy and attempts to motivate the players would bear fruit. Calvert-Lewin just failed to find Richarlison with a deep cross and Djibril Sidibé fired narrowly fired over early on while Ayoze Perez dragged a shot wide of Pickford's right-hand post.

Things came together perfectly for Everton midway through the first period, though, when Richarlison started a move by finding Calvert-Lewin who moved the ball on to Iwobi and his perfectly-weighted ball for Sidibé down the right allowed the Frenchman to swing in a teasing ball that the Brazilian powered home.

Sidibé turned saviour at the other end with a brilliant saving tackle on Perez and Yerry Mina got his head in the way of a goal-bound volley from James Maddison as Leicester sought a quick response, one they appeared destined to find when referee Graham Scott pointed to the penalty spot for what he deemed to be a foul by Mason Holgate on Ben Chilwell. A VAR check eventually rescinded the decision, however, on the basis that there was no contact.

Everton would ultimately pay for not being clinical enough in the final third because they started the second half in confident fashion and could have doubled their lead when Sidibé intercepted a ball out of the home defence and fed Calvert-Lewin but he dallied on the ball and the chance evaporated.

Richarlison then latched into Iwobi's ball over the top and cut it back to Gylfi Sigurdsson but his shot was deflected behind and Keane's header off the resulting corner was caught by Schmeichel and Calvert-Lewin planted another set-piece chance over the crossbar.

Leicester came close to levelling in the 54th minute when Ricardo accelerated into the box and forced a one-handed save from Pickford while at the other end Holgate controlled a corner at the back post and hammered a shot from the angle but it was blocked before Mina glanced a headed chance wide from close range.

The match turned 22 minutes into the second period, however, when Wilfred Ndidi surged through midfield and found Iheanecho who slid the ball to the far post where Vardy had stolen in behind Holgate and he made no mistake to make it 1-1.

Pickford saved from Harvey Barnes and Vardy headed in inch over the bar before Silva made his first changes, withdrawing Calvert-Lewin and Iwobi in favour of Moise Kean and Schneiderlin with 12 minutes left.

Kean came within a foot of marking his introduction with a goal but his first-time shot curled agonisingly into the side-netting and Youri Tielemans went close for the Foxes three minutes later but missed with a low right-footer.

The biggest drama was saved for injury time, however, when Leicester played their way through the visitors' defence once more and Iheanacho claimed his first goal since last year with a crisp shot inside the post that VAR decreed as legal, completing another heart-breaking day for the travelling Evertonians.

Everton now go into Wednesday's Merseyside derby sitting just two points above the relegation zone and Silva's position as manager still up in the air despite a promisingly spirited display from his charges.