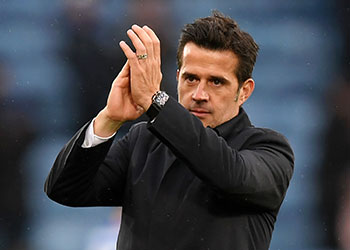 Marco Silva has called on his players to keep their heads up and Gylfi Sigurdsson says the team needs to stick together as Everton's tough sequence of fixtures continues with their visit to Anfield on Wednesday.

The manager and stand-in captain were speaking in the immediate aftermath of Sunday's gut-wrenching defeat to Leicester where the Blues let slip a 1-0 lead and lost 2-1 to a stoppage time goal that was only awarded after the Video Assistant Referee, Simon Hooper, ruled Kelechi Iheanacho as having been onside.

It was a body blow for Everton just when it looked as though they had ground out a creditable draw against the second-place Foxes and gone some way to beginning to atone for a dreadful home defeat to Norwich the weekend before.

“It was harsh for us what happened in the last minutes,” Silva told evertontv. “We did not deserve it at all. We deserved to take more from the game than we did, but that is football.

“The players know what my ambition is every day — the feedback they receive from me is to win every match. That has to be our philosophy as a football club. We knew the players should be brave and we were brave.

“It is tough in our dressing room but I gave the right feedback to them. They have to [keep] their heads up. When we come here and fight and show this team spirit, then good things will come.

“It is our obligation [to remain confident]. It is what we should do. Another game comes quickly and it will be a tough and busy week for us.

“We have to take the positives from today, apart from the result, and prepare well for the match. It will be a tough one again but with this attitude and commitment, we have to go there with ambition and believe we can get a result.

"Together we can change the situation. It will change and this type of fortune will come for us, for sure.”

Sigurdsson was named skipper again in the absence of the injured Seamus Coleman and he had a solid game in a more withdrawn midfield role before Morgan Schneiderlin, the only fit senior defensive midfielder, came on as substitute for the final 12 minutes.

The Iceland international cut a frustrated figure in front of the Sky cameras when interviewed by Geoff Shreeves but stressed that the Blues need to regroup and focus on picking up points from a packed December schedule.

“We felt like defensively we were solid but obviously it's devastating to concede that goal at the end," Sigurdsson said.

“We've come away with as many points as we did last week [against Norwich] so that's the frustrating thing but we've got another game on Wednesday which is a big one for us.

“The performance was better than last week. It's tough to say [what positives we can take] so soon after the game. We just have to keep going, look at the videos and go through them, make sure we stick together and stay positive.

“We've got a lot of games coming up where we can change this.”


Mark Andersson
1 Posted 03/12/2019 at 03:27:57
No more sound bites please. Save your wind for the pitch...
Mark Guglielmo
2 Posted 03/12/2019 at 05:43:46
Not sure how solid a game Sigurdsson had tbh. He just doesn't involve himself, or touch the ball enough. Yet another game with under 30 touches, and in the 8 spot (essentially), that's borderline inexcusable. Gomes averaged over 50, with far more tackles & passes (and even fouls for that matter, which show he's getting involved). Gylfi also appeared content to watch Davies get hung out to dry on the turnover that led to their first goal. He somehow thought he should be in the offensive half of a 1-1 away game to the 2nd best team in the table during the 93rd minute. And finally, weak call or not, got himself a stupid yellow for kicking the ball away. How does the captain, a 30-year-old veteran international, do something like that? If he doesn't have that yellow, he can make the professional foul on Ndidi, and they don't level the game.

Sorry, Gylfi can take a long walk off a short plank.

Rob Young
3 Posted 03/12/2019 at 06:04:20
According to Pickford we can match any team in the league on our day.
So, that must be why we're 17th instead of bottom and why everyone at the club believes they can turn it around.
Alan J Thompson
4 Posted 03/12/2019 at 06:05:01
We didn't deserve this, we will react strongly, stick together, remain positive, watch the video and look forward to Wednesday's big game.
I have faith in the players even if I'm not sure what to tell them to do.

You know, I'd feel a lot happier if we had, "Sorry, haven't got time for a Press Conference as there's work to be done down at the Farm."

As Gordon Strachan once said to a reporter who asked if he could have a quick word, "Velocity!"

They will arise again in future games and will have nothing to do with luck.

Now, if we start to get Platt luck, then we will not only get relegated but will never get back up.

See you in September at 60 – maybe my luck will have changed by then.

How much longer can we go on hearing weak excuses and then seeing the following game he has virtually picked the same side, with a poor subs bench, and naively expecting to achieve a different result?

Christy Ring
12 Posted 03/12/2019 at 14:41:49
When a manager starts talking about luck, it's time to say goodbye. The injuries to JP and Gomes are tough to take, but formation, tactics and performances have been a shambles, Norwich and Sheff Utd, at home, are prime examples.
Liam Reilly
13 Posted 03/12/2019 at 14:46:44
"He has virtually picked the same side, with a poor subs bench, and naively expecting to achieve a different result?"

I'm not saying that he's not made mistakes but who's he not picking Derek?

Fact is, he's playing the cards that he's been dealt. I doubt he'd have chosen to go into this season...:
- without his best central defender of last year
– with only 3 Central Defenders
- without his best defensive midfielder
- without a proven striker of any note.

There are failings throughout the club, not just with Silva. I'm hoping he can pull something out of the bag at Anfield.

Steve Ferns
14 Posted 03/12/2019 at 14:54:13
Virtually the same side with a poor subs bench - does this not prove the point? No one is fit and his hands are tied! If you lose your 1st, 2nd and 3rd choice midfielders then you can expect to see your 4th and 5th choice midfielders, especially if the 6th choice midfielder is injured as well. I mean what on earth do you want him to do? Play an aged Baines in a position he played once in his life when he produced probably the worst performance of his career, only now his legs have gone and he cannot get about the pitch?
Mark Guglielmo
15 Posted 03/12/2019 at 15:42:26
Interestingly, for all the gripes about "he keeps picking the same sides with the same players," that we somehow haven't started the same XI more than 2 games in a row, and even then only recently (Soton-Norwich). That would seem to be at odds with one another, no?

Regardless of that, luck is only one factor. Poor VAR decisions are another. And yet we still have the talent to have win at LEAST half the games we lost. At bare minimum. Steve, not sure how you can't acknowledge that. We're in a must win every week situation because of some terrible, stubborn decisions week-in, week-out throughout the first 8 games.

For all the talk of 'well VAR cost us X points" and such, well losing to Sheffield, Villa, Norwich, Bournemouth, and Burnley cost us 15 pts. It's only when you badly underperform that the excuses shift to talks of luck.

That gives him another Month and about 6 (?) Premier league games (he's had over half a season) to improve.

I'd be all in for Poch ASAP or Mancini in the summer. Otherwise if he continues to fail another short-term manager for rest of the season. Happy for that to be Unsworth if needs, Moyes, Emery, Hiddink whoever..

Gerry Ring
19 Posted 04/12/2019 at 20:12:40
For gods sake, Silva hasn’t shown a shred of evidence to suggest he’s got what it takes to lead Everton. Clueless when it comes to making important decisions. Look at our league position & that’s enough evidence. Good riddance or it’s the championship next season!!!