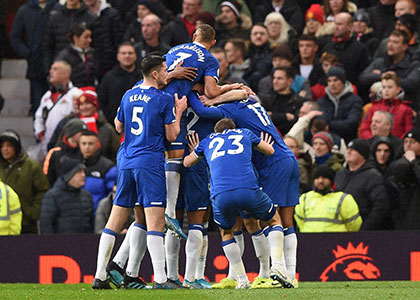 Everton's injury-hit team came within a quarter of an hour of pulling off an unlikely victory on Manchester United's home turf but held on for a deserved draw.

The Blues were leading through Victor Lindelof's first-half own goal and had been holding their hosts at bay with a disciplined rearguard action but were pegged back by substitute Mason Greenwood's crisp finish in the 77th minute.

Taking charge of his second match following the dismissal of Marco Silva, Duncan Ferguson was forced to deploy Mason Holgate as an emergency midfielder because of injury to Morgan Schneiderlin and Gylfi Sigurdsson's illness and then lost Lucas Digne after 25 minutes because of a recurrence of a groin problem.

United had looked threatening on three occasions before that, with Jesse Lingard going very close within just 30 seconds after being played in by Fred and both Marcus Rashford and Daniel James flashing shots narrowly wide and they forced the first save from Jordan Pickford a minute after Digne had made way for Leighton Baines when he beat away another Rashford effort.

Everton took the lead 10 minutes before half-time, though after Lindelof gave the ball away and Alex Iwobi's cross was headed behind. Baines swung the resulting corner into the six-yard box, Dominic Calvert-Lewin challenged David de Gea who missed his punch and the ball bounced in off Lindelof.

The visitors retained their shape and tenacity in the second half and continued to frustrate Ole Gunnar Solskjaer's side, as Rashford ballooned a shot high over the crossbar and James hammered a shot into Lingard's face after Pickford had palmed away Luke Shaw's drive.

James shot weakly at Pickford and Lindelof fired narrowly over before both managers made attacking substitutions. Ferguson introduced Moise Kean for Bernard and Solskjaer threw Greenwood on in place of Lingard and it was the latter change that proved successful.

United moved the ball along the outside of Everton's area to Greenwood who took a touch and fired a low shot through Yerry Mina's legs and inside Pickford's left-hand post.

Sensing the opportunity to turn the tables, United remained the offensive and when Kean conceded a free kick in a dangerous area and Rashford forced an excellent one-handed stop from Pickford.

It was De Gea who was called upon last to keep it at 1-1, however, when he had to dive to his left and turn Iwobi's shot past the post.

Ferguson made the surprising decision to withdraw Kean after just 18 minutes on the field to give Oumar Niasse a run but it was Rashford who would have the game's last attempt on goal, another shot saved by Pickford.

The point represented a job well done for Everton who prevented United from following up wins over Tottenham and Manchester City and denied them a fourth successive win in all competitions.

It increased the gap to the relegation zone to three points with two home games in a row to come in the Premier League and helps buy the Everton board more time as they mull their options in their search for Silva's long-term successor.