The latest part of fundraising campaign to bring the charity a step closer to its one-million-pound target and help make The People's Place a reality for the people who need it most. Spellow Brick Lane will give fans, charity supporters and members of the public the opportunity to be etched into the legacy of the purpose-built mental health facility by purchasing an engraved brick for the commemorative walkway outside the building.

Priced at just £95 including VAT, the limited-edition light blue bricks can be personalised with a name and/or message of up to 32 characters and are the ideal gift for the Evertonian in your life or a poignant way to remember someone special. All purchases will come with a commemorative giftbox* which will include a personalised certificate and an imitation brick keyring printed with your chosen message. Everton in the Community hoping to break ground on The People's Place in late 2020.

Set within landscaped gardens, Spellow Brick Lane will form an attractive block paved pathway from The People's Hub on Spellow Lane to the front door of The People's Place and will further ensure that the Club leaves a lasting legacy in Liverpool 4. 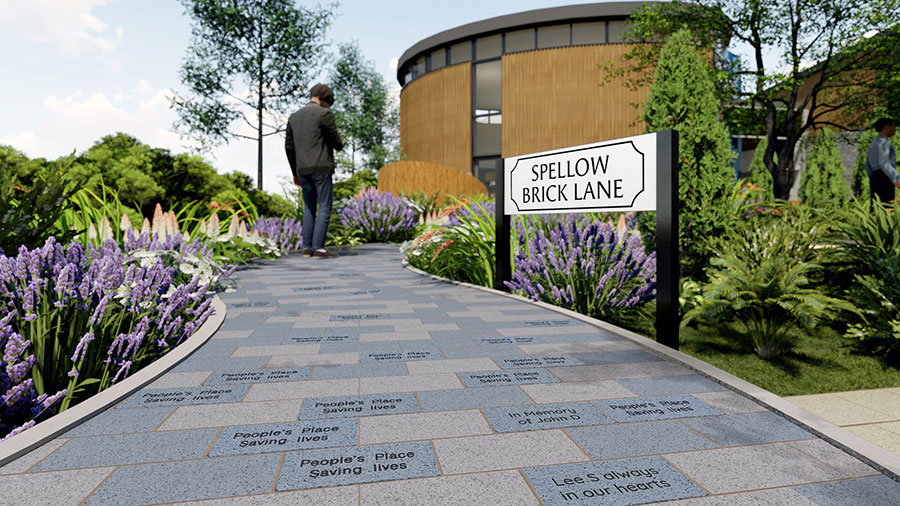 The People's Place will form the latest part of the ‘Goodison Campus', which over the last five years has seen Everton in the Community — along with partners — invest more than £10million in the physical regeneration of the area and has changed the face of the area around Goodison Park, transforming derelict sites into thriving destinations such as Everton Free School, The People's Hub and The Blue Base and is helping to transform lives. Buildings have been acquired, renovated and repurposed with stunning physical and social impact, bringing them back into public use and putting pride and value back into the area.

The charity would like to place its thanks on record to Tobermore for donating the bricks free of charity to Everton in the Community.

Inscriptions may not contain offensive or derogatory messages or any commercial or promotional messages. All messages will be screened by Everton in the Community and anything deemed to be not appropriate will be withdrawn and moneys will be refunded.

We may slate the team and club when things go wrong, but EitC's work is something they do better than anyone else.

Especially when Government, who should be providing such services, fail to do so. Well done Everton for having the courage to fill the gap they've left behind.

Paul Kernot
2 Posted 14/02/2020 at 00:26:03
Couldn't agree more Chris. I now live in NZ, a paradise - yes but with considerable issues of this nature throughout the country and though they try hard, the government here are also fighting a rapidly growing foe in terms of mental illness.
Seb Niemand
3 Posted 14/02/2020 at 05:56:50
Truly, there is no other club like ours.
Steve Ferns
4 Posted 14/02/2020 at 13:38:17
Now the team is more successful and we're not all angry at the club and all elements of it, you can appreciate the charity side of it a bit easier. This is something Blues should be proud of.

This has clearly impacted on some of our players, such as yesterday's AndrÃ© Gomes video: Link

I know some might view things cynically but I see some genuine affection from Gomes there.

I hope you guys are enjoying your own mid winter breaks, but I don't think anyone has had a good a time as “Tom and Domâ€ over in New York.

Anyone spotted Niasse and Kean were both in Miami. I couldn't work out if they were together or not. That seemed an unlikely duo. Good to see Kean was keeping in tip top condition despite enjoying himself, and anyone who thinks he is “carrying weightâ€ should check out his topless training video were he displays an 8-pack even Calvert-Lewin would be proud of.

Yes, it should be Governments doing this, but that's sadly a thing of the past. What Everton are doing in L4 and across Merseyside should make us all proud.

And as Steve says above, the AndrÃ© Gomes film is just so good. What a lovely fella. I wish him every success... he â€˜gets' our Club and our fans. This film should be essential viewing for all Evertonians, particularly the cynical and disenchanted ones.

Derek Knox
6 Posted 15/02/2020 at 07:44:23
Steve F, thanks for the link, which I would recommend for every Evertonian to watch, it really fills you with a sense of pride, and reinforces that feeling that we are the best Club in the World.

The genuine expressions of surprise and disbelief on those young lads' faces was priceless, I can only imagine what it meant to them and I suspect they will be telling all their friends and Classmates about their magical day out for some time to come.

Also to endorse the above, I got the feeling that Andre Gomes was genuinely as pleased as the kids to do it, and give up his time for a good cause, long may it continue.