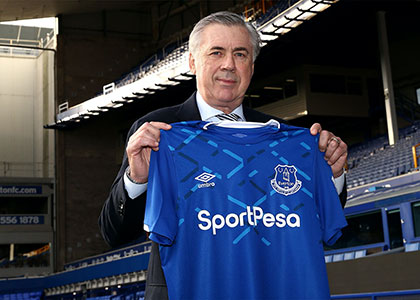 Carlo Ancelotti is confident that it won't take long to realise his ambition of leading Everton into the Champions League.

Speaking to Jamie Carragher in The Telegraph, the Italian expressed the fervent desire of Evertonians everywhere but with the authority of someone who has been there and done it with multiple clubs over the course of his illustrious career.

Ancelotti has the rare distinction of having won the Champions League three times but upon arriving at Everton last December, he joined a club further away from Europe's elite competition than any he has managed since he took the helm at AC Milan in 2001.

It's an unusual situation for him and a task that many pundits expressed doubts he can achieve but, as the man himself explains, there is plenty of ambition at Goodison Park to finally make challenging for the top honours a reality.

“Next season we have to qualify for the Champions League,” Ancelotti told Carragher. “I am here for this.”

“I am sure this club has that ambition. The owner wants to be at the top. That is for sure. The idea is clear. I do not know how long it will take, but it will not take long.

“The spine of the squad is competitive. I do not know what the target will be this season, but next season we have to fight for the top four.”

Critics suggested in December that Ancelotti, who has managed giants like of Real Madrid, Bayern Munich and Paris Saint-Germain in recent years, had only agreed to come to Everton as it represented one last big pay-day.

The 60-year-old's salary with the Blues has variously been reported as being between £6m and £9m a year but he laughed off suggestions it was a financial decision.

“No, no, no. Fortunately, I do not need the money,” he said. “I see Everton like I saw Napoli. It was fantastic to be in Milan, Madrid and Munich, but sometimes you get the possibility to grow a good project.

“We have young players with quality — players like Richarlison, Calvert-Lewin, Holgate and Digne. The base of the team is good. Holgate signed a new contract and Dominic is going to. We have a spine and want to improve the squad in the summer.”

Quotes sourced from The Telegraph


Steve Carse
1 Posted 07/03/2020 at 20:10:22
Ancelotti has clearly recognised, in his short time back in the Premier League that, beyond the top two, the quality is poor. So there's absolutely no reason why, with a couple of quality acquisitions, we shouldn't be in the mix for the Champions League this time next season.
John Voigt
2 Posted 07/03/2020 at 20:17:09
I believe in Everton's top young players.

Looking forward to this summer and more quality players coming in.

Once again, Everton have had yet another disappointing season after high expectations.

Carlo seems the right fit for the club and we now have a manager that even the media recognize and know that it's only a matter of time when we're back winning trophies...

Jerome Shields
6 Posted 08/03/2020 at 01:00:18
Ancelotti will get there, but it may not be at the pace he would like. Just as he speculated on a Europa League place, he is now speculating on a top-four finish.

Whilst most of the players are on the same wavelength as him, both Pickford and Sigurdsson were not up to speed in the last game. The whole team need to be improving on the coaching they are getting from Ancelotti. There are some players who have really improved and are more aware in their defending and attacking play, but there are others who are not listening and still are weak links in the Everton team. What's more, they may never get it.

Everton are constrained, in going into the market to improve the squad, by the poor management of previous regimes. The situation in regard to this has not changed for Ancelotti, unless he can develop the Academy and U23s, which is now more under his control.

Everton need to start winning matches, both home and away. 12th in the table is not good enough.

Jim Bennings
7 Posted 08/03/2020 at 07:58:15
It continues to frustrate that teams like Leicester, Wolves, Sheffield United are all in that top six, vying for Europe and bigger, whilst once again, our problems have seen us fail to grab a great opportunity.

Just like when Leicester won the league in 2016, the season has seen the usual top sides all struggle for form and remain in transition but we have not been good enough when it's mattered most.

As fans, we are made to look foolish by this because we are constantly banging the drums for this squad of international players that get hyped up and this crop of simply irresistible youngsters but they haven't yet produced the results that so-called lesser talented teams are doing.

The end of this season is big but next season is huge, can we allow yet another season to pass us by with little change?

As mentioned by many, we have had our expectations "dumbed down" by managers over the years. Why should we not strive for more, especially when outside the top 2 of Liverpool and Man City, the other two places are up for grabs?

Man Utd, Spurs, Chelsea and Arsenal (that's 3 of the original Sky Four) don't look like they are a season away from getting back up as established top 4 contenders.

It's unlikely that Leicester, Wolves or Sheffield Utd will get too much stronger, unless there is a lot of other investments.

And even if they are in with a shout, why shouldn't we be?

Tony Abrahams
9 Posted 08/03/2020 at 08:16:44
I think that our recruitment this summer frustrated Marco Silva, Jim, but thankfully he's been replaced by a genuine top-drawer football manager, and things will only look up for Everton now.

We have got the nucleus (or have we? â€“ some might say) but that will only be a good starting point if we recruit much better this summer. Win today and the feel-good factor will just keep on growing â€“ that is the biggest indication of how I feel right now.

I've watched Everton for years knowing they haven't got the quality or the belief to go and win away from home against the better teams, but something is stirring because, although we still lack quality, the stray balls have been getting less and less during the last few games, and I've also seen signs in a few of our younger players, that losing is something they don't like, and these younger players also seem so much more aware of what it means to us fans.

Only words, just an opinion, but if you have got a few in your team that don't like losing, it usually becomes infectious, and we all know if the players play for the shirt, Evertonians usually take care of the rest!

I haven't woken up with so much confidence in my team for years, and nothing is going to stop me being positive... well not until the game starts today, anyway!

Phil (Kelsall) Roberts
10 Posted 08/03/2020 at 08:54:43
Next season, there's a likelihood of Spurs completely imploding under Jose as he has started publically criticising players.

Wolves, Leicester, Sheffield United may be tired out by Europe and Vardy is starting to get injured.

Carlo could be on to something...

Centre-backs: seems Holgate could be an answer. Who's the best choice next to him? And if the spine is so strong, why do we concede so many goals?

Centre-midfield: universally acknowledged to be our weakest area. I love Gomes but he doesn't score enough. Sigurdsson doesn't do enough. Schneiderlin doesn't do enough. Delph can't stay fit for more than 10 games in a row ever and doesn't create or score enough. Davies: if he doesn't produce next season, then you have to wonder if he'll ever make that next step up. Gbamin: we haven't seen enough and may not even recover. I'm really baffled by this spine comment.

Centre-forward: I like Richarlison and Calvert-Lewin up top. But who's behind them in case of injury or loss of form etc? Kean: has there ever been a more disappointing outcome since a high profile purchase? Cottee at least scored a few goals (nearly 100 by the time he left). We have had poor luck with strikers and the next purchase has to be bang-on.

Sorry, Carlo, we don't have a good spine. Don't know what you're taking about.

Cottee got progressively worse; I personally expect Kean to do the exact opposite, and honestly not because I've woken up today feeling positive!

I'm getting off ToffeeWeb until after the game, but before I go, I will say I'm a lot more concerned about our midfield than I am about further up the pitch.

Over the park, they have of course gone about things the other way â€“ by having top class forwards and defenders and getting by with a workmanlike but average midfield. Each to their own.

Brian Harrison
16 Posted 08/03/2020 at 12:02:04
I think Carlo Ancelotti is putting a marker down for the players in saying he thinks we can get a Champions League place next season. The message is clear: 7th is not acceptable, and he is looking to change the mindset of players who have been led to believe that 7th is acceptable.

Now we all know saying you plan to do something and doing it can be quite different. But when did we last hear an Everton manager talk about getting a Champions League place? And this isn't from a manager with no experience of playing in the Champions League; this is a man who has won it 3 times.

I think the window in the summer will be very interesting, and by now he will know who stays and who won't be needed.

I think he is largely happy with the squad and excited by the young talent so believes in the overall quality of the squad. Clearly the heart of the squad was ripped out this summer which has destroyed our season but with a few top signings in key areas that will make a big difference like Fernandes has done at Man Utd.

Don't worry about Kean, next season I'm confident we will see a lot more of the talent that showed up when he came on against the neighbours and against Newcastle. I expect him to be a real bargain in time.

In the other positions we have the bones of a team that can challenge for the top 4.

I hope Carlo will be magnifico but he hasn't done anything yet, let's hope his best is yet to come. The best of luck to him as I feel he is good for the club.

I do feel we need a major injection of talent in the Summer to achieve that, easier said than done, with the immovable deadwood and FFP possibly being breached in the process.

This high end backroom staff have an impossible mission: Turn Tom Davies into a dynamic midfield wizard, do you accept the mission?