Gbamin edges closer to being able to make Everton return 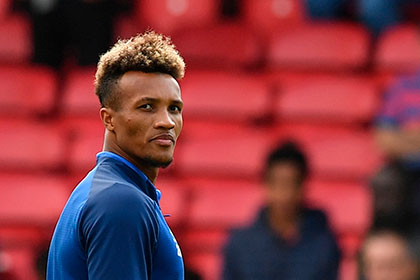 Everton's medical staff say they are happy with the progress of Jean-Philippe Gbamin's recovery from surgery on his torn quadriceps tendon.

The Ivorian has been out of action since August following little more than a couple of hours' worth of action for the Toffees after his £23m move from Mainz when he suffered the serious injury in training.

An initial operation was unsuccessful in correcting the problem but further surgery earlier this year appears to have put him on track for a long-awaited return to the side.

Given how patient the club have had to be with his rehabilitation, there were many who felt that Gbamin should be targeting next season for his return to Premier League action but the suspension of the campaign due to the coronavirus pandemic means that he could play again before the end of 2019-20 if the season does eventually resume.

That remains an open question for now but, thanks to a tailored individual programme that he can work through while in isolation, Gbamin is able to continue the strength-training part of his recovery in the meantime.

“He is working tirelessly to get back and sometimes I have to rein him in a little bit,” first-team physiotherapist Adam Newall told evertonfc.com. “We are pleased with where he's at in his recovery.

“With the surgery he had, the idea is to slowly increase the flexibility in the muscle and progressively ramp up its strength. Once you're happy with those parameters — which we are now — we can increase function.

“If we were back at Finch Farm this week, he'd be ready to build on his outside rehab with the physios. Therefore, we are slowly introducing sports-specific movements this week.

“He is extremely positive and looking forward to mixing with the lads and pushing to be back in training.

“The intention is to have a three-week period of reintegration [when the players return to Finch Farm], then we expect him to start joining the squad for training sessions.

“We are 11 weeks post-surgery and he is getting that bit closer to fitness, so he can continue with outdoor rehab when we get to Finch Farm. He can't wait to get back in and is desperate to be involved.

“It has been a really challenging year for him — but he is extremely positive and exactly where we want him to be physically.”

Of course, I'm looking forward to seeing anyone play again...

Tony Everan
2 Posted 20/04/2020 at 21:25:24
It’s good to hear the physio saying how dedicated the lad is to get back to full fitness. I respect Jean-Phillipe for his hard graft and wish him well. He could well be the missing link for us if he comes back fighting fit.
Robert Tressell
3 Posted 20/04/2020 at 21:52:29
This was the signing I was most excited about last summer. Fingers crossed he comes back as strong as he looked in the Bundesliga.
Phil Lewis
4 Posted 20/04/2020 at 22:14:12
I checked him out on YouTube when he first arrived. We all know that those highlights can be deceiving. But he did look strong, comfortable on the ball with good vision.

If we get him fully fit, who knows? A pairing of him and Gomes may prove the answer to our midfield woes. Fingers and toes crossed that the lad puts his injuries behind him and shows us what he's got.

Michael Lynch
5 Posted 20/04/2020 at 22:33:38
He didn't impress me in the limited time he was available before the injury, but then he didn't really get the chance to settle into the pace of the Premier League before his season was over.

Be like a new signing? Anyway, I echo Mike @1 – be good to see anyone play at this stage.

I wonder how many points we'd have if he'd been fit all season? His athleticism and box-to-box ability is what we've missed since Gueye left.

Martin Berry
9 Posted 20/04/2020 at 23:38:38
Apparently he was seen as quite a specimen in terms of physicality in the Bundesliga and well thought-of... therefore well suited to the Premier League.

I think we could have a real player on our hands when he is over his injuries and adjusts to the pace of the Premier League, which of course will take time.

Si Cooper
10 Posted 21/04/2020 at 02:17:29
I wouldn’t say it was the signing I was most excited about (I was hoping Moise Kean would be a remarkable success) but he was the player I thought we most needed to be a success simply because of the paucity of our defensive midfield options even before we lost Idrissa Gana Gueye.
Jerome Shields
11 Posted 22/04/2020 at 10:03:22
Gbamin I thought was a good buy. But he did have injury problems. Hopefully he has got the care he needed and makes a full recovery. Everton need a player of his specific abilities in midfield, who can play consistently at a top level. The others blow not and cold.
Tom Bowers
12 Posted 22/04/2020 at 14:01:05
With what small bit of action we saw of him, he looked promising but we will have to wait and see when he will be completely ready to go and hopefully will not have any recurrences.

As most of us know, a solid midfield is crucial to getting results and Everton have not been up to snuff in that department for a few decades now. Oh, for a midfield of Reid, Sheedy, Bracewell and Steven again.

John Boon
13 Posted 22/04/2020 at 18:01:10
During what is a world pandemic, amidst rumors of Everton signing a multitude of players, it is difficult to get too enthused about a player returning to full fitness. I wish him a speedy recovery and hope that he is a great signing. Our record over the past five years is "spotty" to say the least. Too tough a time to get overly excited about signing any player.

It must also be difficult for all those who work for ToffeeWeb to find any stories to really kindle enthusiasm. Tough job but please keep trying. Your efforts are appreciated.

Well, the lockdown is getting to me... that's my excuse and I'm sticking with it. :-)

Darryl Ritchie
16 Posted 24/04/2020 at 05:34:01
Not all that familiar with his type of injury. It seems pretty severe, though. Hopefully he can make it a full recovery. He will not be the same player without his former pace.

Get a decent manager and we can't use him due to a worldwide pandemic.

Can anyone explain to me why it is so difficult for professional footballers to play more than one game in a week?

Silva may have still been manager? So overall, I think it may have worked out for the best.

As for Keane and Kean, both overrated. We need better.

Paul Tran
23 Posted 05/05/2020 at 09:02:47
Gbamin was very odd for an Everton midfielder; he looked & ran forwards and moved the ball forwards quickly. He'll pick up the pace ofvthe league. I'd be more concerned about his fitness. We and he can only hope.

John #21, welcome to TW. I'd say it's hard for most modern footballers to play more one game a week because they're pushed to the limit physically most games. I've been enjoying watching the highlights of old games on the telly; the slightly (or very) slower pace allowed for more thought, guile and a contrast in pace, which in my view made it better. I suspect it was kinder on the players, too.

When I watch matches from, say, the eighties, I always think that the game looks faster than today. There are no players feigning injuries, no players rolling around in “agony “, no trainers on the pitch every five minutes to tend to a broken finger nail, no stoppages for minimal “ contact”. The quick but tragically short bursts of football that interrupts the play acting may be quicker in one sense but the overall impression that I get is that the game as a whole is slower nowadays. Too many stoppages, not enough football. (I watched the 1970 F A Cup Final for a giggle last week. Great to see a bit of unpunished violence for once😁)

Paul Tran
25 Posted 05/05/2020 at 20:43:38
I'd agree with you Ray. I'll change my language to say that the modern game is more pacy, with players charging into each other, creating the stoppages you mentioned.

The older game flowed more and was better for the more subtle changes in pace.

You're right. The older game was quicker, these days the play is quicker.

And I'm also enjoying the less subtle sides of the old game. I forgot how wonderfully nasty that 1970 Cup Final was!