Kenny in action with Schalke today 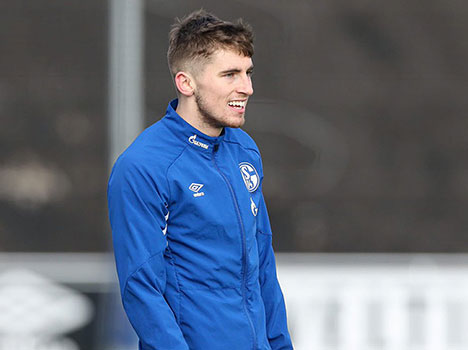 Updated Jonjoe Kenny was back in action again on Sunday when Schalke took on Augsburg in what should've been a home banker.

The Everton full-back is on loan with FC Schalke 04 for the season where he has enjoyed a good campaign and he got back on the pitch last weekend before his Toffees team-mates when "Die Königsblauen" (the Royal Blues) were beaten heavily by Borussia Dortmund. And it was if anything more embarrassing going down at home 3-0 today to lowly Augsburg.

As will be the case with the English Premier League under 'Project Restart', the game took place behind closed doors at the Veltins Arena in Gelsenkirchen, with supporters forced to watch from home because of safety protocols barring large gatherings. Kick-off was at 12:30 BST with live streaming on BT Sport.

While the United Kingdom now has the highest number of officially recorded deaths from Covid-19 in Europe at 36,675, Germany has 8,625 and with the number of active cases on the significant decline, Chancellor Angela Merkel is continuing to ease restrictions in her country.

Many Evertonians have adopted Schalke as their German team for the restart because of their similar colours and the Kenny connection but they are struggling to keep themselves in contention for Europa League qualification before the Bundesliga was suspended in March.

Managed by former Huddersfield Town boss, David Wagner, they slipped from 6th to 8th place since the Bundesliga restarted. They were 6 places above Augsburg in 14th, whose recent record is as poor as Schalke's — both teams having lost four of the last five games in the Bundesliga.

Kenny put in a handful of quality crosses during the game, but Schalke's toothless attack was unable to profit.

Augsburg's Eduard Lowen curled in a sensational free-kick from 23 metres in the 6th minute and Nigeria winger Noah Sarenren Bazee slotted home in the 76th before Sergio Cordova added the third in stoppage time.

Schalke, now without a win in nine league games, slipped down to 8th place on 37 points while Augsburg's first victory after four straight losses lifted them to 12th on 30, just 7 points above the relegation playoff spot.


Francis van Lierop
1 Posted 24/05/2020 at 12:08:12
Schalke should bounce back from their defeat last week, to win this one. I watched Sportschau (German MOTD) again yesterday, and I have to say, the games were better, making them more enjoyable to watch.

The players clearly have to find their rhythm again, after the sudden stop, and were probably more used to the emptiness of the stadium.

Danny ONeill
2 Posted 24/05/2020 at 12:26:18
They have an opportunity over the next 3 games to put themselves back in the European frame. Augsburg today, Dusseldorf midweek followed by Werder Bremen. All winnable games on paper.
Derek Knox
3 Posted 24/05/2020 at 13:21:07
Thanks, Michael, I have watched some of the other games but can't really get enthused or excited, but hopefully this may be better with Jonjoe Kenny involved. Only really looking forward to the Live Forum, more than the match.
Ian Bennett
4 Posted 24/05/2020 at 14:19:48
Schalke putting in an Everton performance.
Danny ONeill
5 Posted 24/05/2020 at 14:31:27
They are fortunate that they had a really good first half of the season. Still only 2 points behind the Europa League spot, but the recent form, demeanour & body language says they will fade into mid-table mediocracy.

Tidy play but no threat up front. The goalkeeper situation hasn't helped them and is now also a problem for them as Nubels probably won't play for Schalke again ahead of his agreed move to Bayern in the summer.

Shame as they could be hugely successful but the business model is to sell on the talent in the knowledge that a replacement is in bound from the conveyor belt that is their academy. That's why they end up with ex-Huddersfield managers; which top manager or coach will take on the job knowing they have to follow that model?

I know he never went on to become a top, top drawer centre back, but we did have a certain Mustafi on our books. A future World Cup winner, who's Everton career reads 2009 - 2012 performances: zero.

Interesting insight on the programme today that I mentioned previously, Poldolski was born in Poland but moved to Germany with his parents aged 2 and grew up in the KÃ¶ln (Cologne) area.

He wanted to play for Poland; however, the Polish coach at the time rejected him, so he played for his adopted country instead.

Amazing how decisions go like that. From a professional perspective, Podolski went on to win the World Cup, but his heart was with his motherland. Similarly, Klose said Poland were too late in approaching him as he would have chosen them. Both World Cup winners with Germany.

It does not look good for Kenny and Todigo who are in their defence.

If you watch those games you cant hold Kenny responsible.

Schalke are a shambles. They play just like the gutless Everton side under Silva. That's why I call Wagner the German Silva.

They are far too cautious and caught in possession quite often which means they get caught on the break a lot. They have a lot of possession but don't do anything with it.

Todibo didn't play today. He got injured against Dortmund but didn't play well in that game.

Most of their goals against have come from midfield players losing the ball in the middle of the Park or just in front of the opponents box.

Kenny looks good but not exceptional and the jury is still out on Todibo who I have not been impressed with when I have watched them.

Jeff Armstrong
16 Posted 24/05/2020 at 22:08:11
Kenny did okay today, but I thought he should have been stronger in the challenge that led to their second goal, a 50/50 he lost.
John Raftery
17 Posted 24/05/2020 at 23:26:19
Eighteen Bundesliga fixtures behind closed doors have produced only three home wins. Does playing at home in an empty stadium provide the hosts with any advantage? Is it a disadvantage?
Peter Gorman
18 Posted 25/05/2020 at 11:43:57
If you count Besic then the answer to the German question is Cenk Tosun. Born in Wetzlar, played in Frankfurt. Also represented Germany from U16 to U21 level.

And here is some footage of him playing for Germany against England:

Skip to 04:24 for young, tussled Tosun scoring a penalty.

Tony Abrahams
19 Posted 25/05/2020 at 11:53:42
It's obviously not an advantage John R. I honestly think playing a couple of the younger players, who are not used to playing in front of crowds, might be more beneficial with regards to helping get the team into the right frame of mind.