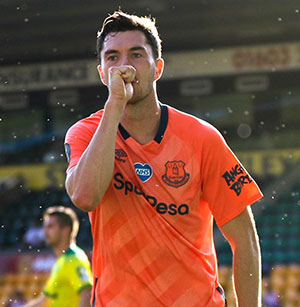 Everton edged a poor contest at Carrow Road thanks to a solitary Michael Keane goal that earned the Toffees their first win in five games.

The Blues had emerged from the half-time break after a dreadful first half with greater purpose and invention and made their brief spell of dominance tell through an important goal off a corner.

Keane rose to glance Lucas Digne's pinpoint delivery from the right into the far corner and the Premier League's bottom club were unable to find a way back.

Carlo Ancelotti had named just one change to the side that started against Liverpool, dropping teenager Anthony Gordon back to the substitutes' bench and naming Bernard wide on the left.

Alex Iwobi kept his place on the opposite side of midfield and, in contrast to his more defensive posture in the derby, he was at the heart of most of the few positive moments Everton were able to produce in the first 45 minutes.

It was Bernard who carved out the first real chance of the game, though, with a 10th minute cross that Dominic Calvert-Lewin couldn't get over in order to put a header on goal.

At the other end, Onel Hernandez twisted and turned his way to a shot from the edge of the box which deflected off Mason Holgate and grazed the outside of the post on its way out for a corner.

And after Everton had lost their way as an attacking force, Lukas Rupp forced Jordan Pickford into a two-fisted save in first-half stoppage time.

Ancelotti moved to shore up midfield by hooking Tom Davies after a dreadful first-half performance and introducing Gylfi Sigurdsson and the Blues, with Iwobi drifting into a more effective central role at times, immediately looked more composed in the middle of the park.

That led to an increasing spell of pressure from the visitors following a shot by Richarlison shortly after the restart that was blocked and when Seamus Coleman won a corner on the right, Digne and Keane combined to fashion what proved to be the winner.

Calvert-Lewin prompted Tim Krul into palming a strong 20-yard effort over the bar and then headed a teasing Iwobi cross disappointingly wide either side of Richarlison being foiled again from a tight angle.

For Daniel Farke's increasingly doomed team, Alexander Tettey saw a speculative effort deflected wide, André Gomes almost put through his own net as a dangerous free-kick was swung into the six-yard box and substitute Adam Idah also had a shot blocked behind.

A late free-kick when sub Moise Kean was felled on the edge of the box by Todd Cantwell gave Digne a chance to seal it from a direct free-kick but he curled over the crossbar.

The win, Everton's first in five matches, lifts them back into the top half for the time being and keeps alive their hopes of qualifying for Europe this season.