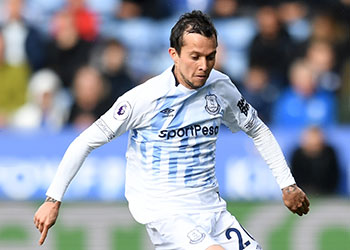 Bernard has opened up about an anxiety attack he suffered last year and has extolled the benefits of seeking professional help to improve his mental health as a result.

The Brazilian has had a chequered introduction to life in the Premier League after joining Everton on a free transfer from Shakhtar Donetsk two years ago. It took him a full season to properly get to grips with the pace and physicality of the Premier League and he has had to battle for first-team chances this season during a period of further upheaval that saw yet another managerial change.

Having been signed under Marco Silva, Bernard is now working on impressing Carlo Ancelotti who arrived six months ago, something he hopes he can now do from a stronger psychological foundation.

“I've been having therapy for the past year,” he told evertontv. “I see a psychologist. It's not something I previously stigmatised, but I never thought I would require this type of treatment.

“I had an anxiety attack a year ago. The psychologist really helped with this; the other professionals involved helped me a lot as well.

“The person I've opened up to about everything has been my psychologist and, a lot of the time, I feel embarrassed to talk about certain things.

“There were different symptoms, I had blurred vision. I'm a bit uncomfortable talking about it as it was a difficult situation, but I'm happy I've got through it.

“I think it's only people who have been through such an attack who really understand the intensity, the way it manifests itself and how difficult it is. Also, how scary it is, as it's so unexpected, you know?

“I sought help as I genuinely needed it. I'm stronger in all areas and have become a better person, more positive and more confident.”

“Today I feel grateful and happier for having gone through this. I'm even grateful for the difficulties and problems we face in life, as they make us better people.

“Now I see how much I've evolved as a person, as a human being, how much this has helped me in my work.”

You never know what's going on behind the scenes.

You've been spending too much time in Brent Stephens' company, Mike!

When I first saw him in October 2018 I thought we had a playmaker that would dazzle with his skills and play more through the centre.

I thought Bernard would be our modern version of Juninho, for anyone who remembers Middlesbrough's little Brazilian genius from the 90s.

His situation is actually bit similar to AndrÃ© Gomes, another who hasn't really kicked on quite like I thought he would; too many inconsistent displays (even before the horrendous injury) and you look at both Bernard and Gomes and wonder if the Premier League is getting too fast for them now.

As for psychologists, well, our entire team needs one for when we play away to the top six!!

Now that's what you call a Panic Attack!!!!

Again sadly like Gomes, on his day brilliant, but too often games pass him by.

Michael O'Malley
11 Posted 05/07/2020 at 17:06:38
I reckon we'd see more of his skills if we dominated the ball a bit more. I can't remember the last time we absolutely dominated anybody so, every time he has possession, he needs to do something with it. He tries his heart out but a lot of games do pass him by but he is a cracking little player.
Peter Mills
12 Posted 05/07/2020 at 18:31:47
Bernard frustrates, because he is a little guy playing amongst big ones. But there is no doubt he has skill, he doesn't hide, and is no chicken.

Good on him for not being embarrassed about speaking about his anxieties. I hope his therapy helps him, and his speaking out about it encourages others to seek help if they need it. Good man.

We have two wide midfielders who basically just aren't really any good as wide players. Iwobi is neither here or there, not direct enough to be winger, not tidy enough to be a regular in the centre.

Bernard likewise on the left.

I was recently watching some games from Martinez last season, while we were god awful defensively we were a really cohesive flexible unit going forward, we had energy in Lennon, Deulofeu and Barkley in that midfield, McCarthy (when he played).

I look at our midfield now and from left to right across it there just no real athleticism or dynamism.

John Raftery
14 Posted 05/07/2020 at 23:06:52
Bernard has performed well this season in several home games but has been very poor in most of the away games, being hauled off at half-time more than once. His inconsistency mirrors that of the team as a whole.

I think one reason he has struggled is that Digne has not been on top form for much of the season. The partnership between the two of them was one of the features of our success in the closing months of last season.

Another reason is that, alongside a pedestrian central midfield incapable of controlling the play, especially in away matches, Bernard is not the player who can change the dynamic of a game by grabbing possession and driving the team forward.

He is a player who can add value in the final third by unlocking defences with a clever piece of footwork, a neat pass or a tidy finish. To be at his most effective, he needs to be in a team playing on the front foot, dominant in possession and pushing the opposition back towards their own goal. At present, we are not that team.

Here is the video interview on the club site.

Bernard opens up on anxiety attack

The club need to do much more in this area to help individuals but also collectively as a team to improve game management and instil a winning mentalality.

As for Bernard he's a trier but always looks fatigued, maybe he lacks stamina or just spends to much time chasing and lacks positional sense.

Like Iwobi, Siggy and Gomes to a degree, they are attacking midfielders played out of position. They lack the pace and skill to be wingers and poor tackling / pressing in a deeper midfield role.

He's got skill, balance and can be direct but his final ball and lack of options only add to him giving the ball away cheaply.

I could not describe any current Everton player as brilliant. Several have had very good games but not consistently enough.