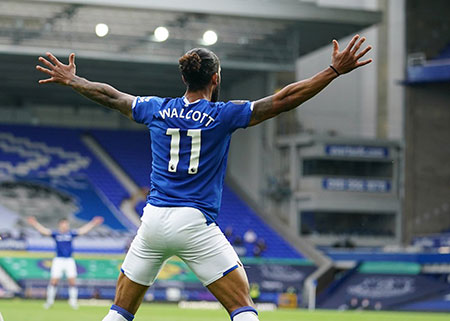 Theo Walcott came off the bench to score an 88th-minute goal that put a serious dent in Aston Villa's hopes of avoiding the drop and rescued an unlikely point for an Everton side who mustered a pitiful response to their manager's call for a reaction to Sunday's defeat at Wolves.

Villa, who haven't won an away game since the turn of the year, had deservedly gone ahead with 18 minutes to go when Ezri Konsa prodded home Conor Hourihane's free-kick, a reward for the visitors' gradually increasing pressure while their hosts' performance fell away in the second half.

Indeed, despite coming in for criticism from Carlo Ancelotti and captain Seamus Coleman after the 3-0 loss at Molineux, the Toffees barely raised their tempo after a decent, if unproductive, first half and hadn't registered a single shot on target until two minutes from the end of regulation time when Walcott struck to grab a draw.

Ancelotti had made five changes from the side that started against Wolves, reverting back to a 4-4-2 and deploying Bernard and Alex Iwobi as the wide men either side of Tom Davies and the returning Gomes. Mason Holgate was declared fit enough to start but would last just 15 minutes before his shin injury flared up again and he had to be replaced by Jarrad Branthwaite.

Everton started brightly enough, with Dominic Calvert-Lewin volleying an Iwobi cross over, Bernard dropping a delivery from the left onto the top of the crossbar and Lucas Digne seeing an effort charged down but the Blues were found wanting when it came to the final execution, with a number of promising moves just fizzling out.

For Villa, Ally Samatta headed Ahmed El Mohamady's cross over and was foiled in first-half stoppage time by Branthwaite's tackle either side of a Jack Grealish shot that was deflected over, again by the teenage centre-half.

With their situation dire, Villa needed to take the initiative in the second half and they came out of the interval on the attack. Grealish dragged one shot wide and missed with another curling effort almost immediately afterwards while at the other end, good work by Iwobi to take him past Matt Targett was spoiled by a heavy cross and Tom Davies lifted a rising shot well over.

Ancelotti made his next changes shortly after the hour mark, replacing Iwobi with Walcott and Bernard with Anthony Gordon but they didn't have the desired effect. Instead, it was Dean Smith's team that took the lead following a clumsy foul by Gomes.

Hourihane swung in a dangerous cross and Konsa showed the greatest desire, stretching to meet it and guide it past Jordan Pickford.

Davies and Richarlison were withdrawn in favour of Gylfi Sigurdsson and Moise Keane and though the latter belted a wayward effort high over, it was the away side who almost doubled their lead with 11 minutes to go. Grealish whipped a cross to the back post where Anwar El Ghazi only had to turn it home but he ended up kicking it clear of goal instead.

Everton finally showed some life as the clock began to run down and Gomes served an equaliser up on a plate for Calvert-Lewin with a terrific low cross to the near post but the striker put it the wrong side of the upright.

The Portuguese turned provider again just two minutes later, however, with a deeper delivery that found Walcott lurking and the substitute looped a header over the goalkeeper and barely inches over the line to peg Villa back at 1-1.

Sigurdsson had a shot deflected wide in stoppage time as Everton pressed for a winner but they had to be content with a point that means they will almost certainly finish in the bottom half of the table this season.