Predating the renowned Port Sunlight Model Village by some 25 years, Bromborough Pool was built to house their workforce by the executive who conducted the affairs of the Price Candle factory. It was also the birthplace of former Everton goalkeeper, Richard Williams.

Born on the 17th of April 1866, he was the 3rd child of Richard, a general labourer, and his wife, Margaret. After being educated at the village school, the 1881 census finds young Richard has now started employment in the soap factory where he met Sarah Jane Brocklebank and whom he married in 1889.

He had started his football career playing a full back for Bromborough Pool but eventually established himself in the position of goalkeeper. The club were members of both the Wirral and the Liverpool & District FA. In 1889 they became founder members of the West Lancashire League along with such teams as Kirkdale, Stanley and Tranmere Rovers. 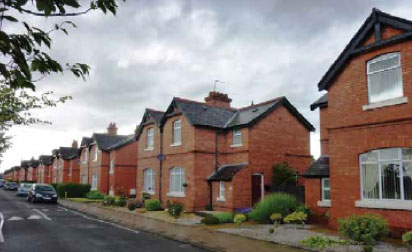 At the time of the 1891 census the couple are living in the Model Village, at 11 South View (see photo). On the 29th of April that year Richard Williams is seen at Anfield playing for a Liverpool District X1 against a team of players who were based in the City. Next September, following the sudden death of John Angus, he signed professional forms with Everton for a wage of 45/- per week.

Standing at a height of 6 foot, he immediately took his place in the Combination side as they opened the season with a home game against the Welsh side, Chirk. He was a virtually a spectator as they won the game, 11(eleven)-0.

The Bromborough man had been signed as cover for Dave Jardine and had to wait until the 24th of October to make his Football League debut, away against Derby County. He kept a clean sheet as Everton scored 3 times. On the 28th of November, beginning with a 5-1 home win over Aston Villa, he began a prolonged spell in the first X1 that ended following an FA Cup defeat at the hands of Burnley. He then gave way to Dave Jardine as Everton were forced to surrender the league championship to Sunderland. During the summer, Williams was employed as a professional cricket player by the Stanley club who played their home matches on Stanley Park in Liverpool.

Next season, with Everton now playing at Goodison Park, the man occupying the place under the home crossbar changed on several occasions, but Sunderland continued to outpace them in their quest to regain the league championship. Their best hope of silverware lay in the National knockout where Williams was to play a major role.

He took part in every tie as the club won their way through to the final where a game against Wolverhampton Wanderers awaited them. The FA committee decided to move the game away from London to the home of the Manchester Athletic Club at Fallowfield. Their decision proved to be catastrophic. 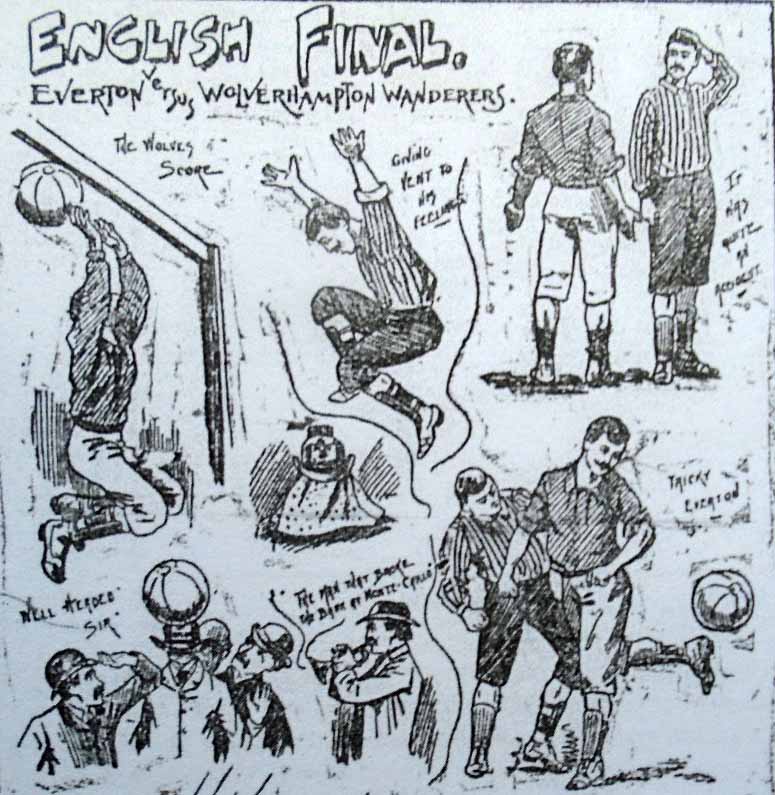 The organisers expected a crowd of around 25,000 people to attend but the actual number proved to be around 60,000 who overwhelmed the occasion by encroaching on to the field of play. This situation forced the teams to play the “long ball game” because the wingmen were frequently impeded by the spectators stood “right up” to the touchline. After about 60 minutes of play, Harry Allan sent a long ball towards the Everton goal which deceived Dick Williams and sailed past him for the only goal of the game. Many explanations have been suggested for his error, disturbed by the closeness the crowd being favourite, that they are now etched into Everton Folklore.

Nonetheless, Williams established himself as the “first choice” Everton goalkeeper for the next two seasons at a time when the league was dominated by Sunderland. Williams had made 70 league and FA Cup appearances for Everton when he joined Southern League side Luton Town in November 1895. No fee was involved but Everton agreed to play a match, which took place on the 18th of April, 1896 at Luton, for the benefit of their former player.

Williams had made 78 appearances for the Bedfordshire club when, owing to financial difficulties, he left with 3 of his team mates, to join a Glossop North End side who had just been elected as members of the Football League Division Two. 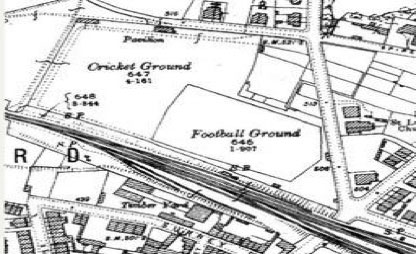 The Derbyshire club, who had the financial backing of the wealthy Hill-Wood family, immediately “moved in” with the local cricket club and increased the capacity of their enclosure on North Road. Dick Williams and his teammates surprised all concerned by gaining promotion as they ended the season in second place behind Manchester City. (Glossop, with a population of around 22,000, remains the smallest town to be represented at the top level of English football.)

History was made on the 2nd of September 1899, when Dick Williams took up position at North Road in front of a crowd of around 7,000 people. The visitors were a Burnley side that contained his former Everton teammate, Edgar Chadwick. The Hillmen won the game 2-0 but when Everton arrived at North Road, on the 21st of October, they were just three places above the bottom club, Liverpool. 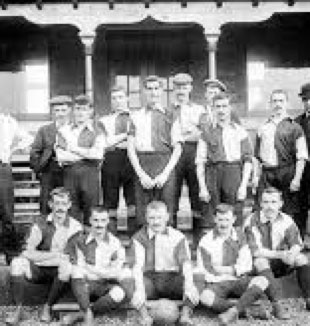 Dick, seen here wearing a cap, took up position against an Everton side that had much changed since his days at Goodison Park and Dickie Boyle and Jack Taylor were all that remained of his former teammates. The visitors, it was reported, looked “ill at ease” on the tiny sloping enclosure that contained around 4,000 spectators. Will Toman gave them the lead but a late equaliser gave the home side a share of the points. Nevertheless, the Derbyshire club found the top level too much for them to endure and, along with Burnley, they were relegated to Division Two at the end of the season. Dick Williams then retired from the game and settled in the Lancashire town of Leigh.

The 1901 census finds the family living at 45 Hope Street and have 4 children. The head of the household, who was to become a popular figure in the town, was working as a general labourer while also being employed as a “professional” with Leigh Cricket Club. The rest of his life, however, was to be touched by sadness.

In 1908 Sarah Jane died and was buried in the local cemetery. In 1910, Richard Williams married Elizabeth Brocklebank who was her younger sister and she bore him a son. In 1914-15 he lost his two elder children in quick succession followed, in 1918, by his second wife. The former Everton goalkeeper spent the rest of his days living at Hope Street as a widower until his death on the 5th of November 1939. The last resting place of Richard Williams, along with the predeceased members of his family, is clearly marked at Leigh Cemetery.