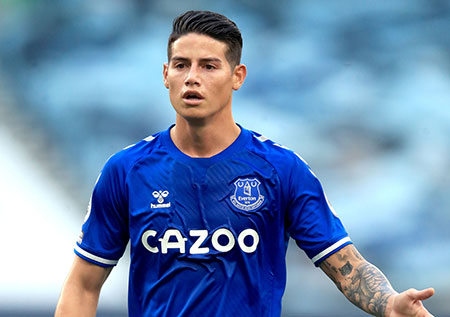 Everton spurned the chance to move within a point of the top of the Premier League by turning in an abject performance against West Ham and were beaten by a late Tomas Souček goal at an empty Goodison Park.

The Government's decision to move Merseyside back into Tier 3 meant that the 2,000 fans selected to attend this fixture had to stay away and their absence was felt as the Blues ambled their way through three quarters of this New Year's Day encounter before André Gomes and James Rodriguez stepped off the bench to provide some much-needed urgency.

Unfortunately, however, it was David Moyes's side who made the breakthrough in the 86th minute to earn the Scot his first win as a visiting manager at Goodison Park since he left Everton in 2013.

With the postponement of Monday's clash with Manchester City, Carlo Ancelotti was able to name a mostly unchanged line-up from the side that won at Sheffield United on Boxing Day but he was forced into one alteration after Alex Iwobi picked up a slight knock in training.

Bernard came into the line-up for the Nigerian, Richarlison returned on the flank, Seamus Coleman started at right-back and Mason Holgate moved into central defence where Michael Keane was given a rest.

Unfortunately, Richarlison's return didn't translate into more attacking intent and invention from Everton and they toiled through a tedious first half that yielded just one shot on target, that from Bernard on the stroke of half-time that forced a decent save from Darren Randolph in the Hammers' goal.

Prior to that, it was West Ham who had come closer to scoring when Jarrod Bowen's header dropped to Jordan Pickford, Souček could only glance a corner wide with a header and Aaron Cresswell had flashed a shot across the face of goal.

Everton began the second period with a bit more tempo but soon lapsed back into long spells of passing backwards in the face of West Ham's press and making things difficult for themselves with sloppy distribution and periodic lapses in concentration.

They were almost caught out by a free-kick that saw Cresswell drive across the six-yard box again and Pickford had to palm away a set-piece from the same player a few minutes later while substitute Michail Antonio almost punished Coleman for a badly-placed header but Pickford denied him.

Bernard head earlier slipped Coleman in for a half-chance at the other end but the save was a routine one for Randolph and it would be the Brazilian's last contribution before both he and the disappointing Gylfi Sigurdsson were withdrawn in favour of Rodriguez and Gomes.

The initial signs were hopeful as both players injected some creativity and drive to the proceedings but with Richarlison looking a pale shadow of his former self and the team unable to carve out clear openings, the home side's best chances came from set-pieces but the visitors repelled everything thrown at them in the air.

Ancelotti took Dominic Calvert-Lewin off in favour of Cenk Tosun for the final few minutes but it almost felt inevitable when the deadlock was broken at the other end. Pickford did well to parry away one shot from Souček but when Cresswell drilled the rebound back into the Everton box and Yerry Mina deflected it back into Souček's path, the Czech international slammed it past Pickford to win the game.

In the final reckoning, a performance weighed down by caution and a lack of adventure and that yielded just two shots on target in 90 minutes underlined how much further this Everton side has to go under Ancelotti before it can be considered capable of challenging for top-four spot.