Everton stun United to snatch 3-3 draw at the death 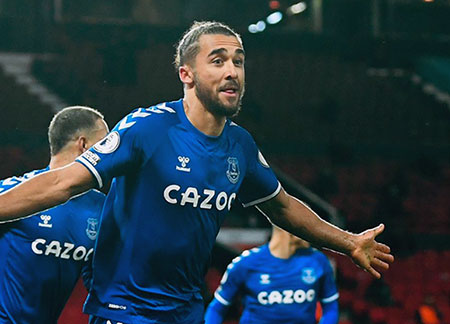 Everton extended their unbeaten run away from home to seven games in dramatic fashion, grabbing a 3-3 draw against Manchester United thanks to Dominic Calvert-Lewin's goal five minutes into stoppage time at Old Trafford.

The Blues had looked buried by the halfway stage after United had profited from plenty of space outside the visitors' box to ease into a 2-0 lead through goals by Edinson Cavani and Bruno Fernandes.

However, they hit back with two goals in three minutes early in the second half when Abdoulaye Doucouré popped up to tuck home from close range and then set up James Rodriguez to rattle in an equaliser.

Ole Gunnar Solskjaer's men restored their advantage through Scott McTominay with 20 minutes to go and looked on course for another victory but had two points snatched away by Calvert-Lewin's predatory finish with what was the last meaningful kick of the game.

As promised, Carlo Ancelotti rotated out some of the players who had featured at Leeds on Wednesday evening, replacing Gylfi Sigurdsson with Tom Davies, Yerry Mina with Michael Keane and Alex Iwobi with James and his team began the contest well before the hosts established a firm grip on proceedings.

Doucouré was well placed to hack the ball away from near his goal line in the 19th minute and Mason Greenwood fizzed the ball across the face of Robin Olsen's goal in the 22nd before United took the lead two minutes later.

Marcus Rashford was afforded too much time to size up a cross from the home side's right flank and he picked Cavani out with a raking centre, the Uruguayan beating Olsen at the far post with a downward header.

Bruno Fernandes then fired straight at the Swede and Fred, on as a substitute in place of the injured Paul Pogba, shot wide before the Red Devils doubled their lead on the stroke of half-time. Again the Everton defence backed off and Fernandes flighted an impressive effort over the goalkeeper's head and in from 19 yards out.

Calvert-Lewin had a chance to cut the lead in half at the end of first-half stoppage time when he was put clean through but he side-footed wide with just David de Gea to beat, although the lineman's flag went up once the ball had gone dead suggesting any goal might have been ruled out by VAR.

The Toffees remained undaunted, however, and, out of nowhere, they were level within seven minutes of the start of the second period, although only after Olsen had had to beat away a drive from Luke Shaw.

Davies powered forward and threaded an excellent ball inside Harry Maguire for Calvert-Lewin and when De Gea could only palm his prodded centre into the path of Doucouré in front of goal, the Frenchman had the simple task of knocking it home.

Three minutes later, it was 2-2. Doucouré collected Victor Lindelof's defensive header off Lucas Digne's cross, pinged the ball back to James at the top of the box and the Colombian controlled it deftly before drilling an unerring shot into the bottom corner.

Everton were pegged back for most of the next 18 minutes, however, and Olsen had to be at his best to save from Cavani but the keeper was cursing his footing with 20 minutes left. Shaw swung a free-kick over after Holgate had fouled him clumsily, McTominay met it and his header looped agonisingly over Olsen's gloves as he appeared to slip trying to dive to his left.

Fernandes curled one shot over and missed with a direct-free-kick while Rashford blazed high and wide but it wasn't until four minutes from the end of normal time that the Blues threatened again when Digne struck the outside of the post with a low drive.

Two minutes later, Richarlison wasted a decent chance after Maguire had gone down looking in vain for a free-kick and Calvert-Lewin played the Brazilian in but he sliced disappointingly off target.

That looked to have been that for Everton but when new signing Josh King, on for Doucouré as an 81st minute sub, drew a foul near the left touchline and Digne hoisted a free-kick towards the penalty spot, Keane got a touch to the ball, it came off Calvert-Lewin's midriff and fell nicely for him to guide it into the corner past the stranded keeper.

It was a stunning end to a lively game and a reward for both Ancelotti's positive tactical shift early in the second half, some attacking personnel changes towards the end and the players' refusal to give up until the very end.

It was a result that moved Everton back into sixth place, at least until seventh-placed Chelsea play Sheffield United tomorrow, and one which will hopefully provide them with a huge psychological boost to take into the FA Cup tie with Tottenham in midweek.