Outplayed once more, Everton stumble again in chase for Europe 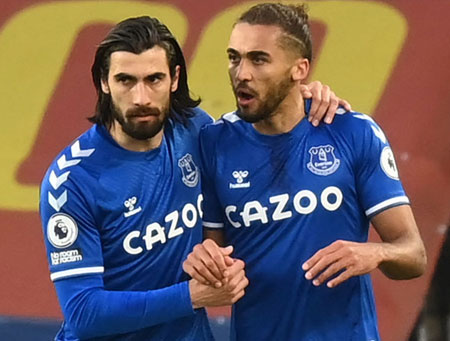 Everton served up another awful home performance that further diminishes their Europa League hopes as Villa out-shone them to win at Goodison Park.

The Villans came to Merseyside with precious little to play for but, like the likes of Fulham and Burnley in recent weeks, they played the Toffees off the park and deservedly took the points thanks to Anwar El Ghazi's impressive late strike.

In truth, the visitors might have been out of sight by half-time had it not been for an inspired display by Jordan Pickford but although Dominic Calvert-Lewin scored to cancel out Ollie Watkins's opener, Everton lacked penetration, spirit and imagination throughout.

Carlo Ancelotti was forced into a late reshuffle when James Rodriguez had to be withdrawn from the starting XI with a recurrence of his calf problem, replacing him with Alex Iwobi while persisting with the under-performing André Gomes in midfield.

Mason Holgate kept his spot in central defence alongside Ben Godfrey but it was the former's horrendous error that handed Villa the lead in the 13th minute. Caught trying to turn back to goal, Holgate was robbed of the ball by Ollie Watkins who stayed on his feet and slotted past Pickford.

Pickford did well to come off his line and save from Watkins to prevent the former Brentford man from doubling the score four minutes later but Everton restored parity two minutes after that. Lucas Digne swung a deep corner in from the right where Calvert-Lewin spun away from Ross Barkley and planted a header into the net off Tyrone Mings.

What could have been a turning point arrived in the 23rd minute when a typical volleyed centre from Digne was met by a diving Calvert-Lewin but Emiliano Martínez parried his header.

That was followed by a flurry of chances for Villa that began with a Barkley free-kick that flew narrowly over after Digne had fouled Bertrand Traoré before poor control by Richarlison inside his own half gave up possession and Pickford had to be alert to deny the Burkina Faso international, first with a close-range save and then with an acrobatic leap to bat his curling shot behind for a corner.

Pickford then did brilliantly to foil Watkins as he met a deep Matty Cash cross with his knee and El Ghazi somehow slammed the rebound off the crossbar while, a few minutes later, Barkley took advantage of yet more space in front of the hosts' defence to fire a low drive off the post from 20-plus yards.

Gylfi Sigurdsson's wayward attempt to bend one in from distance was a close as the Blues came to Villa's goal for the remainder of the first half and they were let down by poor finishing by Iwobi and Allan early in the second period.

A mistake by Mings handed a chance to Richarlison but he faced a difficult task to beat Martinez from the angle and shot straight at the keeper while another first-time shot by the Brazilian was also comfortably gathered by the Argentine.

As the match drifted into the final 20 minutes, the game was begging to be won by an Everton side still supposedly “in the right”, in Ancelotti's words, for European qualification but there was precious little intensity from them in the closing stages.

Curiously, the Italian turned to Fabian Delph to replace Gomes and the former Manchester City midfielder again offered very little off the bench before Bernard came on for Iwobi and Sigurdsson was swapped for Josh King with eight minutes to go.

The last change was made once the match was lost, however, because the chasm-wide spaces in Everton's midfield were exposed one more time by Dean Smith's men who worked the ball to El Ghazi and once he had checked back onto his right foot, he had time to curl an unstoppable shot past Pickford.

With this result and Chelsea's win over Fulham earlier in the day, Everton's slender Champions League hopes are over for another year and they now face a Herculean task to make the Europa League, while the Europa Conference League remains more achievable.

Certainly, if Ancelotti's team is to finish any higher than eighth, they're going to have to find some kind of form at home, something that looks as unlikely now as it did at the start of the year when they were beaten by West Ham.