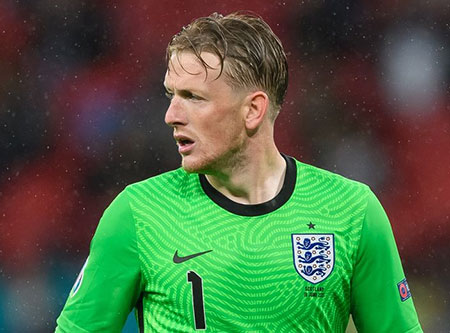 Jordan Pickford made his third start of Euro 2020 between the sticks for England but Dominic Calvert-Lewin had to watch on from the bench as Gareth Southgate's men did enough to edge the Czech Republic.

Due to results in Groups A through C, England were already guaranteed to qualify for the knockout phase but had to wait on the outcome of this match and Scotland's clash with Croatia to see if they went through as group winners, runners-up or as third-place qualifiers.

The winner of the group will face off against the second-placed team in the so-called group of death that includes France, Germany and Portugal.

England made a strong start and almost went ahead after two minutes when Raheem Sterling's attempted lob bounced back off the post.

But the Manchester City man found the net for the second time in the tournament not long afterwards when he nodded home Jack Grealish's dinked cross at the back post.

Pickford was called into action midway through the first half to push a 20-yard shot away to safety as the Czechs came in search of an equaliser.

The leveller almost arrived 10 minutes before half-time when Tomas Souček hammered an effort inches wide of the upright.

In the other game, the two teams went into the break 1-1 after Callum McGregor cancelled out former Everton midfielder Nikola Vlasic's opener.

The second period between England and the Czech Republic was largely a non-event but at Hampden Park, Croatian assumed control and went ahead with a cracking strike from Luka Modric and sealed a 3-1 win thanks to Ivan Perisic's header off a corner.

The results mean that England top the group, Croatia claim second place and the Czech become one of the four third-placed teams to go through to the Round of 16.

A win's a win I suppose, but it's joyless stuff.

Tough next game, regardless of the opponent, but who knows.

I hope he doesn’t get his head turned and like wise the same to DCL.

Fears are arising and DCL goes, Richarlison will be on the next plane out of the North West, it’s a nap.

But the next Everton manager can hopefully take care of such matters.

Possibly Jeff. A bit like last night, depending on how the results went, any of the 4 could have qualified.

Having watched, I think England's best chance is to be matched with Portugal. On paper obviously, you can never really predict these things.

But, should the likely 3 of France, Germany and Portugal progress and one of them plays England, a so called big scalp is going in the first knockout stage.

Andrew Merrick
10 Posted 23/06/2021 at 08:06:48
Grealish deserved a start, Saka was a breath of fresh air, exactly what we need, confident young energetic player, always looking for the next play, om the front foot looking forwards, real prospect that boy.
I am not a big MaGuire fan but he did ok too.
All those subs did slow the game, the shape goes a bit...
Lets see if England are up to a stronger challenge...
Michael Lynch
11 Posted 23/06/2021 at 09:34:55
Yes, Saka was good. He claims the manager told him to go out and express himself, but I I've tried my hardest and I just can't picture Southgate ever saying that to anyone.
Brian Harrison
12 Posted 23/06/2021 at 10:06:08
There is no doubt that England will have to step up their performance to progress, but they have proved they are hard to score against and thats very important. As I said the other day Pickford looks a calmer more composed keeper than he did 12 months ago, and much better because of that. I don't know what Lee Dixon has against Pickford he has looked to criticize him on all 3 games he has played, and for me he hasn't put a foot wrong.

I was surprised when Southgate withdrew Grealish as he makes things happen, I like that he runs at sides and very rarely loses the ball. Although Rice and Phillips have both played well I agree with Roy Keane its got to be one or the other, I would like to see Foden alongside Rice and that allows you to play Mount and grealish further forward. I am not sure Southgate will be brave enough to ditch his 2 holding midfield players from the start, and would probably only do that if we are losing with 20 minutes left.

David Pearl
13 Posted 23/06/2021 at 10:44:22
Brian
I doubt Southgate will play Foden centre mid. More likely Mount... but even more likely Henderson, who l thought did okay too and is a good presence in there. I don't mind 2 mids in there as long as the full backs get forwards and the front 4 have enough of the ball to create chances. Its probably the only way England can win the tournament by being a solid unit. There are enough flair players to make a difference. If we don't control midfield against France or Germany then we don't win

JP wad excellent last night, always talking and looks sure of himself.

No real shape as far as could see and sooooo many misplaced passes and long back passes.

JP has been very good though. Long may it continue.

Kev Jones
15 Posted 23/06/2021 at 17:01:20
Much better consistently attacking first half. Saka and Grealish made a big difference making things happen. The team tried to bring Kane into it unlike the first two games - not that he did much. Puzzled why he does not stick with a team, give them time to gel. Really pleased for Pickford, good saves, calm and reassuring. Looking forward to the group of death to see who survives to face England.