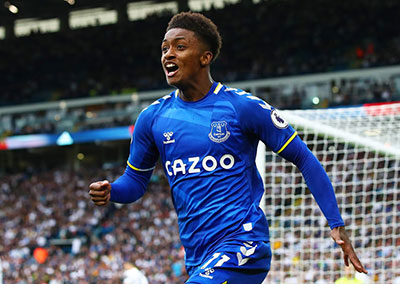 Everton were twice pegged back in an entertaining if, ultimately, slightly disappointing encounter at Elland Road as Raphinha's 72nd-minute strike earned Leeds a 2-2 draw.

The Blues had weathered the early pressure from the hosts, who welcomed back a full house of fans for the first time in the Premier League since 2004, and went ahead from the penalty spot before Michael Keane's defensive slip allowed Leeds to level before half-time.

Demarai Gray scored his first goal in an Everton jersey to restore the Toffees' lead but Dominic Calvert-Lewin squandered a great chance to make it 3-1 before more slack defending led to a second equaliser for the Yorkshire side.

With Yerry Mina now deemed to be match fit following his late return to training following the Copa America, Rafael Benitez made two changes to the team that started against Southampton last week, deploying the Colombian alongside Keane in place of Mason Holgate and swapping Alex Iwobi in for Andros Townsend. Ben Godfrey, André Gomes and James Rodriguez continue to isolate due to concerns over possible Covid-19 exposure but Moise Kean returned to the bench.

Everton had the game's first chance when Abdoulaye Doucouré bounced a shot wide as early as the first minute but Leeds soon assumed control of possession and Raphinha put their first effort on target in the 10th minute while Richarlison's drive at the end of a purposeful run was charged down at the other end.

Marcelo Bielsa's men forced a couple of corners off deflected shots from distance but it was the Blues who were making better inroads into the opposition box, with Gray almost finding Calvert-Lewin's out-stretched boot after a scintillating run and a low cross from the right and Lucas Digne then attempting to find the striker near the penalty spot with a delivery from the left.

Calvert-Lewin was visibly tugged back by the shirt by Liam Cooper during the latter incident but it took a long look by Video Assistant Referee Kevin Friend and trip to the pitch-side monitor by referee Darren England before the penalty and yellow card were eventually awarded.

Calvert-Lewin assumed responsibility for the kick himself and buried it into Illan Meslier's net to give Everton a 30th-minute lead.

Raphinha tried to bend one around Jordan Pickford shortly afterwards and dragged another effort even further wide in the 40th minute but Everton were pretty comfortable until Keane was caught horribly flat-footed and was unable to cut out a ball aimed at Patrick Bamford which allowed the Leeds striker to race towards goal and set up Mateusz Klich to fire past Pickford and make it 1-1.

Doucouré, Everton's stand-out performer on the day, tested Meslier with a low drive and Iwobi lashed an ugly half-volley over as the visitors finished the first period the stronger of the two teams.

That continued into the second half which was less than five minutes old when the Blues struck again. Doucouré played a tempting ball into the box to pick out Gray who stepped over it and appeared to have let the chance go begging but, instead, he cut a shot back across the keeper with his left foot and found the inside of far side of the goal.

Keane blocked a goal-bound volley from Raphinha after Calvert-Lewin had forced a save from Meslier as Leeds tried to respond but it was Everton who might have put the match beyond the home side had Calvert-Lewin been more clinical with a sublime through-ball from Iwobi. The pass was perfect for the England man but instead of dinking it over the advancing keeper, he fired straight at Meslier and the chance was lost.

Successive Leeds corners with around 20 minutes to go were cleared but when the second was swung back into the box, Digne and Seamus Coleman got in each other's way, Bamford was able to lay it back to Raphinha and the Brazilian, who scored in both games against Everton last season, curled an impressive shot around the players in front of him and inside the post to level things up again.

Still, despite Leeds having more of the ball, it was Everton who looked the more likely to win it with Calvert-Lewin making a bit of a mess of a header from Iwobi's centre and Richarlison going agonisingly close with a bending effort from the edge of the box.

The final chances fell to Doucouré and Keane in injury time but the Frenchman's shot took a heavy deflection and Elland Road held it's breath as it bounced past the wrong-footed keeper and wide of his right-hand post. Keane got his head on the resulting corner but could only put it into Meslier's arms and both sides had to be content with a point.

Given the return to supporters and, with them, a truer reflection of the demands of playing away from home, a point was a decent result for Benitez and his men even if they will travel back to Merseyside knowing they could have picked up a second victory of the season.

Leeds were energetic and inventive but, in the final reckoning, failed to cause the Toffees any real problems other than the ones they created for themselves with questionable defending. From an attacking perspective, there was much to admire about Everton's directness and purpose and though they did enough to win, the three points eluded them.