Everton not willing to sell Richarlison 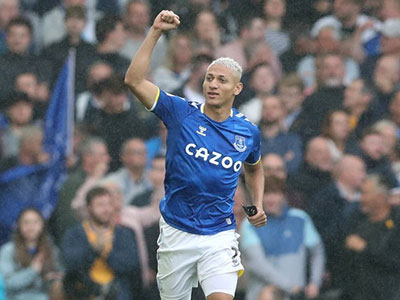 According to manager Rafael Benitez, Everton have no intention of letting Richarlison go before the transfer deadline.

Speculation from Brazil erupted last night that Richarlison's agent was in France to negotiate potential terms with Paris Saint-Germain following reports that the Ligue 1 giants had made the forward their top target to replace Kylian Mbappé.

Mbappé is the subject of a massive bid from Real Madrid to take the French international star to La Liga and Richarlison is reportedly being lined up to take his place.

However, if what Benitez said at his pre-match press conference ahead of the trip to Brighton holds any water, Everton have no plans to sell him this week:

“We are not considering selling him,” Benitez said. “He is our player, we are really pleased with him and we are happy. Hopefully he can score a lot of goals for us this year.”

According to UOL Esporte, the Blues would demand €120m for Richarlison.

The Spaniard also refused to be drawn on speculation around other players involved in the media transfer speculation, saying:

“We have some players that people know are good players and they are players people could be talking about.

“There are rumours but as coaches we have to concentrate on what we have.

“We have our players here, we have an important game against Brighton and we will try to do our best to be sure we are ready.”

James Rodriguez has been the subject of endless talk about his future, with the latest reports suggesting he could be loaned out to FC Porto for the season.

If I remember correctly, Tottenham received a loan from the government for £175 million due to the pandemic. If you can't afford to pay your staff, but they have already spent around £60 million on Romero and Gil.

I don't see how that falls in line with FFP... or the Premier League's version!

That sounds good deal but, at this stage of the window, I believe we would be loosing if we sell Richarlison and have not gotten any apropiate replacement.

Although the Gueye move sounds interesting if in some case it should happen. But Richarlison is quite irreplaceable for me. We should go for a Zaha kind of player if he does leave, so as not to lose on the footy side of things. Quite difficult really.

There's a player here in Boca Juniors, a Colombian forward who is lightening quick but has some trouble off the pitch: Sebastian Villa. 25 years old. I'd love us to go for him.

Jay Harris
6 Posted 27/08/2021 at 16:06:47
Richarlison's work rate and goals should not be undervalued and IMO it would be like losing 2 key players and too late in the window to find adequate replacements.

Richarlison is the sort of player we should be building the squad around and not selling at any price.

Ronaldo is in the market for sale or will we get the comments of, typical Everton signing of, old past his prime, not fit, just another Kenwright fault, why are we always buying other clubs castoffs?

Let's see if Benitez is as good as his word and he stays, as there is no way we are going to replace him with the transfer figures that are quoted.

Jay 6 – every player has his price and we are not yet back to the situation where we can build a team around a player like Richarlison, as he will be on many top teams' list of players to purchase.

I do however share your wishes but we are not in a position – just yet... maybe in a year or two.

Second hand unconfirmed conversational information, so be interested if anyone has insight.

I'm very surprised that Digne's name doesn't pop up when the money teams start sniffing around.

How has Bill Kenwright come into this? Leave the poor bloke alone. I still believe he is deserving of that statue outside the new stadium. Anyone in agreement with me?