Everton punished for dire display as QPR advance on penalties 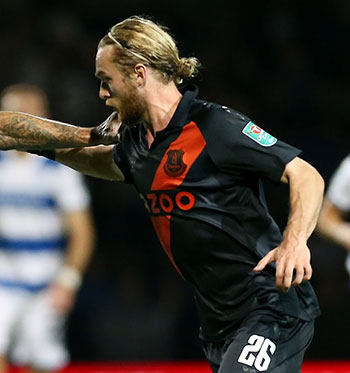 Everton evoked memories of myriad EFL Cup failings against lower-division clubs from the past as they were dumped out by Queens Park Rangers from the Championship in a dramatic penalty shoot-out at Loftus Road.

The Blues had twice come back from a losing position and were level at 2-2 when Abdoulaye Doucouré and Demarai Gray were introduced off the bench in an attempt to win the tie but Rafael Benitez's men lacked urgency in the closing stages which left them at the mercy of the lottery of penalties.

Ben Godfrey got a second bite at the cherry after the Rs' goalkeeper, Seny Dieng, was penalised for stepping off his line to save the defender's spot-kick but Tom Davies's attempt to tuck his penalty inside the post lacked sufficient pace and it was turned onto the post. Jimmy Dunne then converted his to win it 8-7 for the hosts.

It should never had got that far but Benitez was punished for opting for the usual weakened “cup” side and was let down badly, particularly by his centre-half pairing who struggled to cope with veteran striker Charlie Austin and a limp midfield duo of André Gomes and Tom Davies that contributed to QPR enjoying, at one stage, 70% of the ball against a Premier League team.

If Benitez was relying on a repeat of the tie at Huddersfield in the previous round where his charges still squeaked through despite going down to 10 men in the second half, the early knockings might have given him comfort. Andros Townsend, who would end up head-and-shoulders the best Everton player on the pitch, offered some signs of things to come from him when he fizzed a dangerous ball across the QPR box in the seventh minute but there were no takes in black jerseys in the middle.

And more great work by Townsend six minutes later ended with the mercurial Alex Iwobi centring for Anthony Gordon and the youngster forced the first save of the match from Dieng, a strong one-handed stop down to his right.

Unfortunately, the porous nature of Everton's below-strength midfield and right flank was underscored on QPR's first meaningful attack. Chris Willock twice made a mug of Davies before finding Ilias Chair who in turn knocked it to Sam McCallum and when Asmir Begovic could only palm his cross straight to Austin, the striker simply nodded into the empty net to make it 1-0.

After two dreadful attempts from outside the box by Gomes, Iwobi really should have put the Blues ahead a minute before Lucas Digne eventually did after an awful error by a Rangers defender who presented the Nigerian with a one-on-one situation with the goalkeeper, albeit with a square pass and certain goal available to his left. Iwobi went for goal himself but was denied by an excellent save with his leg by Dieng.

The keeper was powerless to stop Digne from evening things up, though, when QPR's offside trap was marginally sprung by a delicious ball over the top by Townsend that picked out the run of the Frenchman who calmly side-footed it home first-time.

Parity lasted just four minutes, however, as Everton's soft centre was exploited again. This time it was Chair who swung the ball in from the Rs' left and Austin capitalised on the yard's worth of space afforded by Godfrey by rising above him and glancing a header inside the far post.

Two minutes later, Willock tested Begovic with a low shot as QPR threatened to embarrass the visitors but Everton made it to the break at only 2-1 down.

And with their manager's half-time team talk no doubt ringing in their ears, they got the early goal they needed once the second period resumed. Gomes scuffed a corner to the near post, Mason Holgate managed to knock it across into the melée in front of goal where Townsend converted from close range to make it 2-2.

That should have provided the platform from which Everton went on to win the game but they lacked the requisite cutting edge or drive in midfield even after the substitutes had been introduced. Salomon Rondon had toiled fruitlessly up front without really getting the measure of the centre-halves deployed against him and he scooped his best chance over with an ugly left-footed effort.

Doucouré, meanwhile, had a strong case for a penalty waved away 15 minutes from the end by referee Kevin Friend while Michael Keane, on as a late replacement for Digne who had picked up an ankle knock, missed a great chance to win it in the 80th minute when he pounded a corner over the crossbar with his head from a couple of yards out.

Once it had gone to penalties, Everton's League Cup curse took over, manifesting itself in the worst spot-kick of the shoot-out from Davies who invited Dieng to save it at full-stretch and set Dunne up to be the hero with QPR's eighth successful kick.