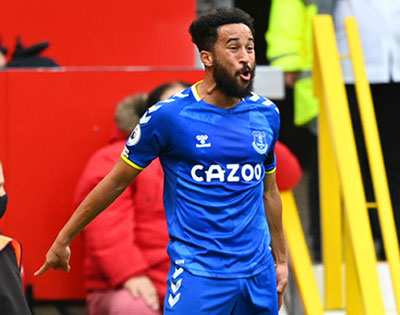 Andros Townsend continued his electric start to life as an Everton player as he grabbed the goal that earned the Blues a hugely commendable point at Old Trafford.

Rafael Benitez's side were trailing at the break to an Anthony Martial goal and holding their own against Ole Gunnar Solskjaer's expensively-assembled outfit when Demarai Gray led a counter-attack following a corner that ended with Townsend sweeping home his fifth goal in nine games since arriving on a free transfer over the summer.

It was just reward for a tremendous Everton performance but they will feel as though they could have plundered all three points and thought they had when Yerry Mina tucked home a pass from Tom Davies four minutes from time but the Colombian's goal was chalked off for offside.

Benitez came into the weekend with a raft of injuries compromising his chances of getting anything out of this match, with the absences of Richarlison, Dominic Calvert-Lewin, Seamus Coleman and André Gomes compounded by Alex Iwobi picking up a problem in training during the week.

That meant Anthony Gordon starting his first Premier League fixture of the 2021-22 season while Gray and Salomon Rondon were deployed up front and Ben Godfrey continued to deputise at right-back.

The game began at a high tempo with both teams moving the ball around crisply but it was the home side who carved out the first clear-cut chance when Aaron Wan-Bissaka wrong-footed Lucas Digne down United's right flank and crossed for Martial but the Frenchman had mis-timed his jump and could only glance a header well off target.

At the other end, Rondon dallied over an opportunity created for him by Digne but was, in any case, flagged for offside before Michael Keane guided a header narrowly wide from Townsend's free-kick after the former Crystal Palace winger had been fouled himself by Luke Shaw.

Understandably, Solskjaer's side continued to look the more dangerous in the final third and it took a good save from Jordan Pickford to deny Edinson Cavani as he got down smartly to push the Uruguayan's header behind for a corner.

As they would later underscore with their goal, Everton were a persistent threat on the counter and when Doucouré and Townsend combined as the Blues surged out of their half in the 25th minute, the former picked Rondon out with a cross from the left but the Venezuelan's shot was blocked.

Their best chance of the half came from Gray, however, with a superb individual effort where he picked up the ball from deep, powered into space between two defenders and struck a low shot that was curling towards the corner until De Gea palmed aside well. Gordon's low delivery from the byline was later dummied by Rondon but Townsend's touch was also stopped in front of goal before Wan-Bissaka's out-stretched leg charged down Doucouré's goal-bound shot from near the penalty spot.

Constantly marshalled by Benitez from the sidelines with instructions to remain compact, Everton were unfortunately undone by a rare positional mistake two minutes before the interval.

Godfrey had drifted out of the right-back area and towards his own “D” which left Martial in oceans of space in the back of the penalty area where he was teed up by Fernandes to despatch a deflected shot past Pickford.

If the initial indications early in the second period suggested that United would take control of proceedings and eventually run away with it, Everton continued to dig in and frustrate them, even after Cristiano Ronaldo, Jadon Sancho and then Paul Pogba stepped off the bench to bolster the hosts' cause.

And of the couple of chances that were created in the first 20 minutes after the restart, both fell to Everton and Townsend. The first was an unlikely headed opportunity from Digne's cross that dropped onto the roof of the net but the second was delivered on a gilded platter by Doucouré at the end of a rapier-like breakaway.

The Toffees cleared a corner after the indomitable Allan had blocked an attempted centre from Scott McTominay and the ball was kept in brilliantly by Gray's quick feet after he had out-muscled Fred on the touchline. His ball inside found the rampaging figure of Doucouré and when he slid a perfectly-weighted pass into the path of Townsend, the new Blue hero despatched a crisp shot across the keeper whose feet remained rooted to the spot.

Davies replaced Gordon with 18 minutes to go as Benitez moved to shore up midfield to protect the point but Everton were nearly undone by Sancho and Ronaldo. Thankfully, the Portuguese cut his shot from a very right angle across the face of Pickford's goal and wide of the far post.

To the visitors' enormous credit, that would be the last real chance that the Red Devils would be allowed to create and had there been a winner, it would have been Everton's. Godfrey got the better of Sancho challenging for the ball after a corner from the Blues' left had been headed clear and then knocked it to Davies who had found himself in 10 yards of space and with the De Gea and his goal at his mercy.

The substitute elected not to shoot and chose to slide the ball across to Mina instead but, unfortunately, the defender was a yard ahead of the ball and the last man and the Blues's celebrations of a dramatic late winner were cut short but a quick check from Video Assistant Referee, Stuart Atwell.

Given the imbalance in the quality of the two squads in general and then the key absentees on the day that meant that in many ways meant Benitez came into the proverbial fight with one hand tied behind his back, this was a terrific performance and result from Everton.

It extends the Spaniard's start as the Toffees' boss to just one League defeat in seven matches and moved them into the top four for the time being with the international break — and a chance for Calvert-Lewin, Richarlison and Coleman in particular to complete their rehabilitation from injury — to come.