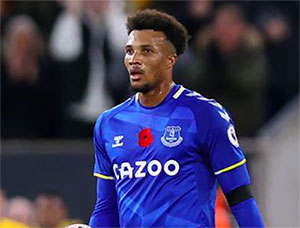 Everton went down to a third successive defeat after shooting themselves in the foot at Molineux with a horrendous first-half performance, one for which they came close to atoning but, ultimately, they couldn't find a second goal in order to grab a point.

After Hwang Hee-Chan's 15th-minute goal had been chalked off for offside, Max Kilman capitalised on the Blues' ongoing inability to defend set-pieces to score his first goal for Wolves with 27 minutes on the clock.

Ben Godfrey's horrible back-pass just five minutes later then gifted Raul Jimenez his first Premier League goal since returning from a long lay-off from a skull fracture as Everton threatened to collapse in the same manner in which they had against Watford last weekend.

However, after the hapless Jean-Philippe Gbamin was withdrawn at half-time and Fabian Delph came on to fortify a nearly invisible midfield, the visitors rallied and were given hope when Alex Iwobi halved the deficit with 25 minutes to go.

However, though they would go close late on, the obstacles they had created for themselves in the first period proved insurmountable for Rafael Benitez's side who fall to 10th place having not registered a win for over a month.

Given how poorly they had performed in that shocking defeat to the Hornets, Tom Davies and Salomon Rondon dropped out of Benitez's starting XI, one which lost Lucas Digne to a muscle complaint and necessitated Godfrey moving to left-back and Mason Holgate coming back into the team at centre-half alongside Michael Keane.

Surprisingly, last week's star performer, Anthony Gordon, was also dropped in favour of Iwobi but it was the selection of Gbamin alongside Allan in a midfield two rather than a three that would prove costly in an embarrassingly one-side first 35 minutes from Everton's perspective.

Wolves were slicing through the Toffees' mid-section at will at times and when they forced a 10th-minute corner, Ruben Neves forced a good parrying save from Jordon Pickford while Conor Coady couldn't prod the rebound home before Holgate hacked it clear.

Another quick Wolves move through the middle in the 14th minute ended with Joao Moutinho feeding the ball to Francisco Trincao but his fierce drive was tipped over brilliantly by Pickford as Everton continued to flounder.

And a minute late, the hosts thought they had taken the lead. Once more Bruno Lage's men eased through the void in Everton's midfield, Jimenez drove forward and fed Hwang who fired a shot that cannoned off the far post and spun over the line. The South Korean was shown by the Video Assistant Referee's replay to have been offside, however, and the scores remained level.

Everton's attacking impetus had largely been non-existent up to the midway point in the first half but they threatened for the first time when Iwobi and Richarlison played a neat one-two and the Nigerian international fizzed a ball in to Demarai Gray who could only divert the awkward ball well over the bar.

Wolves were quickly on the attack at the other end where Seamus Coleman charged down Jimenez's shot setting up the corner from which the Midlanders would, somewhat predictably, score. Kilman rose to meet the delivery from the home team's left and he steered a downward header past Pickford to make it 1-0.

The Toffees' woes were compounded soon afterwards when Godfrey attempted a routine back-pass to Pickford but he under-hit it and Jimenez ghosted in unseen by Holgate and dinked the ball over the keeper to double Wolves's advantage.

Everton had a couple of chances to reduce the arrears before half-time, not least when Ruben Saiss shinned a loose ball into the path of Demarai Gray seven minutes before the break but the winger, who looked out-of-sorts all evening on his return to the Midlands, dragged his shot well wide of Jose Sa's goal.

Then, as the first period was drawing to a close and Richarlison was fouled wide on the right, Andros Townsend swung in a dangerous free-kick but Holgate skied a chance into the stands.

Needing to do something to address the gaping holes in midfield, Benitez introduced Delph at the break and the Blues visibly improved. Townsend almost prompted an own goal from Coady in the 47th minute but the defender's header missed the far post by a foot before the veteran winger put Gray in on goal but the former Leverkusen man delayed his shot perhaps a fraction too long and it was blocked behind for a corner,

Saiss and Sa then got into a muddle trying to play out from the back with the latter hitting Richarlison with an attempt to return a pass to his defender but the Brazilian just wasn't able to swing the loose ball in before the keeper recovered and foiled him.

Richarlison had then a half chance with a header off a cross from the right but didn't time his connection correctly while at the other end, Jimenez missed an increasingly rare opportunity for Wolves when Nelson Semedo clipped in a cross and the Mexican could only plant his header onto the outside of the post.

Everton's efforts since half-time were rewarded, though, in the 66th minute. A spell of pressure ended with Godfrey's low shot appearing to hit Keane before rebounding to Iwobi who rattled it down the centre of the goal and in off the keeper's leg to make it 2-1.

Yet Wolves could have restored their two-goal advantage almost immediately when Trincao found himself in space and found Hwang who cut inside and returned the ball to the Portuguese winger who deftly skipped it over Godfrey's attempted block but then screwed his shot off target with just Pickford to beat.

With the game increasingly stretched and Everton more and more desperate, the visitors tried to pile on the pressure in the closing stages after Iwobi had been replaced by Gordon for the final 12 minutes.

And the teenager came very close to making the difference, first when he glanced a corner kick towards the inside of the far post but Sa palmed his header away and when when he chipped an inviting cross to the back post where Gray eschewed the chance to volley goal-wards and found himself closed out before he could test Sa from close range.

Rondon was thrown on for Gray for the five minutes of stoppage time but Everton's race was run by then and Wolves held on to take the points.