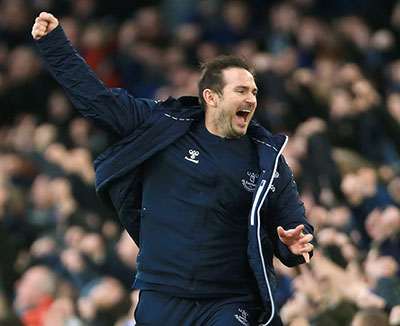 Frank Lampard's reign at Everton began with a flurry of goals and a first win as the Blues swept Brentford aside to progress to the fifth round of the FA Cup.

Lined up in a 3-4-3 formation and exhibiting a more settled passing style and more confidence with the ball at their feet overall, Lampard's side made all the early running in this all-Premier League tie and went close through Richarlison when the Brazilian dragged a shot wide in the seventh minute.

Everton lost Ben Godrey, however, not long afterwards when the defender pulled up limping after stretching into a challenge in the centre-circle and had to be helped off the pitch with a suspected hamstring injury.

Anthony Gordon narrowly cleared the crossbar with a nice curling left-footer in the 25th minute but it was Godfrey's replacement, Yerry Mina who made the breakthrough from a 30th-minute corner after André Gomes had stung the palms of David Raya in the Brentford goal with a terrific 25-yard effort.

Gray swung the dead ball in from the left and Mina easily won the match-up with his marker to power home a header from six yards out.

Richarlison had a decent chance to double the advantage six minutes later but he snatched at the opportunity and smashed it over before the Bees belatedly came to life and threatened their hosts for the first time in the game.

Mathias Jensen's ball inside found Sergi Canos and he forced Jordan Pickford to push the ball behind but the keeper was adjudged to have been fouled as the resulting corner came in while Gray sliced another promising off target at the end of the first half.

The second period was less than three minutes old when Everton double the lead. Allan picked the ball up in midfield, chipped it deftly into the path of Richarlison and the Brazilian forward took advantage of the goalkeeper's decision to rush to the edge of his box by knocking it calmly into the open net from 18 yards out.

Brentford responded, first when Roeslev's cut-back skidded across Everton's penalty area and just evaded Toney in front of goal and then when Christian Nørgaard picked the striker out with an excellent defence-splitting pass. Toney smartly left his foot in as Pickford slid across to close him down and referee Michael Oliver pointed to the spot.

Toney sent Pickford the wrong way with his spot-kick and halved the visitors' deficit but it would take Everton just eight minutes to effectively make the game safe. Gordon's cut-back found Gray but his shot was blocked behind and from the consequent corner, the Blues scored their third.

Once again it was Gray the taker and when Bech Sorensen got a head to the ball under pressure from Mina, he could only knock it into the path of Holgate who nodded inside the far post to make it 3-1.

Lampard made his second and third changes with 17 minutes to go, withdrawing Gordon and home debutant Vitalii Mykolenko in favour of Townsend and Jonjoe Kenny and the match went into a prolonged lull until Richarlison and Gray made way for Cenk Tosun and Alex Iwobi with a couple of minutes left of the 90.

And both of the later substitutes were involved as Everton put the gloss on Lampard's day with the Toffees' fourth in stoppage time. Iwobi touched Tosun's clever ball inside on to Townsend in the box and the winger had time to pick his spot and whip a shot past the keeper.

So the perfect start for the new boss, the biggest margin of victory in a first match in charge for an Everton manager since WJ Sawyer 104 years ago, and safe passage to the next round, albeit at the cost of Godfrey whose pace will be missed at the back when Everton face Newcastle in a crucial Premier League match-up on Tuesday evening.

However, the team will travel in much more confident mood for having won so comfortably today and looked so much more assured in their own skins for the large part under new management.