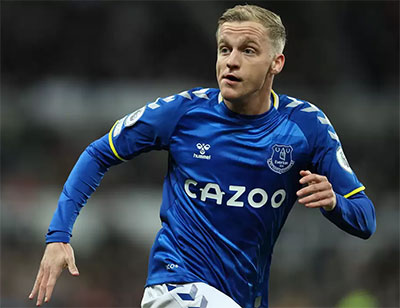 Everton's optimism from the weekend slammed headlong into harsh reality at St James's Park as injuries claimed two more important players and Newcastle beat them convincingly to pitch the Blues into a relegation dogfight in the lower reaches of the Premier League.

Frank Lampard's side took the lead in a match for the second time in four days but then threw it away with costly individual errors, yet more poor defending at a set-piece, and once they had fallen behind they couldn't come close to firing their way back into the contest despite the introduction of new signings Dele Alli and Donny van de Beek.

In the end, an Everton defence weakened by the loss of Ben Godfrey on Saturday and, predictably, Yerry Mina this evening couldn't cope with the pace, power and trickery of Allan Saint-Maximin who set up one goal and drew the foul for another as Newcastle began their quest to pull themselves clear of trouble under Eddie Howe and his new signings.

Lampard was able to name Dele and Van de Beek in his squad after they were forced to sit out the FA Cup win over Brentford and Dominic Calvert-Lewin also travelled but the new manager kept faith with the side that had finished Saturday's tie with the exception of Vitalii Mykolenko who was ruled out after returning an inconclusive Covid-19 test.

That meant Andros Townsend being deployed at left wing-back while André Gomes continued in central midfield alongside Allan and Richarlison ploughed the lone furrow up front ahead of Demarai Gray and Anthony Gordon.

Lampard's faith in some of the personnel who had done well in the cup tie was let down, though, as Gomes immediately undermined the praise heaped on him after his performance against the Bees with another of his familiarly ponderous and profligate displays. Meanwhile, Mason Holgate's sloppiness at the back handed the Magpies an immediate route back into the game in the 37th minute after he, himself, had forced Jamaal Lascelles into scoring an own goal at the other end just a minute or so earlier.

Everton had just about weathered a frenetic start to what had been billed as a relegation six-pointer despite some awful distribution in their own half in the early stages, particularly from Mina and Gomes. Richarlison and Gordon almost carved out an early chance but the former failed to spot the latter's clever run and the Brazilian dragged a shot a yard or so wide in the 12th minute but Everton lost Gray to injury, however, after just 25 minutes.

He was replaced by Dele who had one shot charged down in an otherwise subdued remainder of the half to start his Blues career.

Newcastle, meanwhile, had been feisty and aggressive but they were largely being kept at arm's length despite the intensity of the home crowd's support. Jonjoe Shelvey had smashed a second-minute chance inches over after Mina's slack pass had gifted Newcastle possession and Jordan Pickford had safely gathered after the ball had bounced goal-wards off Chris Wood but Howe's side didn't have a clear chance until just past the half-hour mark when Pickford had to make a good save with his foot while Mina lay prone on the turf clutching his upper thigh.

The Colombian did his best to convince the physio that he could continue when clearly he couldn't and he was replaced by Jarrad Branthwaite.

It was from a reckless Shelvey tackle on Gordon, one that on another day might have resulted in a red card, that the visitors took the lead. Townsend swung the free-kick in and when the ball broke to Holgate his shot was cleared off the line but into Lascelles who could only watch helplessly as the ball bounced over the goal line.

It was a moment that called for composure from Everton but when Holgate's first attempted pass out of defence came back off a Newcastle attacker, he repeated the error by aiming a sloppy pass in Allan's general direction, one that was intercepted and it required Michael Keane to clear it behind.

Unfortunately, the Blues' set-piece frailty reared its head again and Lascelles was able to meet Kieran Trippier's corner and crash it off the crossbar, the rebound hitting Holgate and rebounding into the net to make it 1-1.

Wood might have turned the contest on its head when Ryan Fraser's deflected shot fell to him in front of goal but he put a tame header into Pickford's arms while Joelinton mis-kicked when Saint-Maximin's cut-back skidded invitingly to him near the penalty spot in first-half stoppage time.

If Lampard had tried to calm his new charges down and impress on them the need to keep their heads, the advice didn't seem to be heeded in the second half. Gomes picked up his customary booking for pulling an opponent back once he had gone past him and when Dele was dispossessed in his own half a few minutes later, Newcastle pounced.

Saint-Maximin drove past Seamus Coleman to the byline, clipped the ball into the six-yard box where Ryan Fraser knocked it home from close range to put the Magpies ahead.

Everton had a decent chance to test Martin Dubravka at the other end just a couple of minutes later when Richarlison was fouled on the edge of the box but the Brazilian despatched a poor free-kick into the wall. Meanwhile, the nerves were getting to the Blues' back line, particularly when Saint-Maximin had the ball at his feet.

He forced one save from Pickford that Wood turned into the net before being flagged offside but when the Frenchman accelerated past Allan and drew a foul from the Brazilian midfielder, it gave Trippier the chance to wrap things up. The former England full-back did just that by bending a free-kick around the wall and inside the post with 10 minutes left.

And it might have been worse because while Everton toiled in midfield, the impressive substitute Donny van de Beek trying his hardest to drive Lampard's men forward in the closing stages, Jacob Murphy hit the post late on and Pickford denied Joe Willock from the rebound and Saint-Maximin almost got the goal his performance deserved when his injury-time effort was deflected just past the post.

All in all it was a miserable night for Everton whose injury woes were deepened by the loss of Mina and Gray and who simply wilted in the heat of Newcastle's greater desire and fight. The defeat closes the gap between the two sides to a single point and leaves the Toffees hovering just three points above the drop zone.

The visit of Leeds United to Goodison Park on Saturday now assumes greater importance for an Everton team that has won just one match in 15 League games and have been unable to generate any upward momentum at a time when those below them have been starting to pick up points.