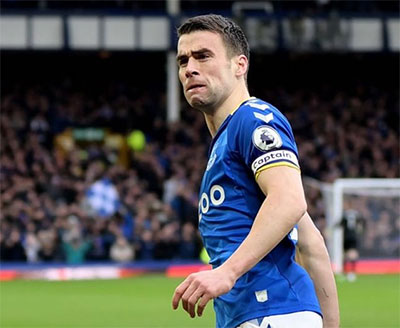 Everton beat back the impending panic of a relegation scrap with a brilliant, adrenaline-fuelled performance that blew away Leeds United's much-vaunted attack at an ebullient Goodison Park.

The home fans had pledged to bring their banners, passion and their voices to be the catalyst for a much-needed victory after Tuesday's worrying defeat at Newcastle and Frank Lampard's team and they did in inspiring fashion, with the Blues responding superbly to run out convincing winners and keep their first clean sheet in 12 games.

Captain Seamus Coleman led the way with a brave opener that typified Everton's spirit on the day as he headed home from close range, Michael Keane powered home a header from a corner and Richarlison's deflected effort in the second half off Anthony Gordon's heel before Salomon Rondon almost scored one of the goals of the season in stoppage time.

Having been denied the opportunity by injuries to use him off the bench at St James's Park, Lampard was able to name Dominic Calvert-Lewin in his starting XI for the first time and with Demarai Gray ruled out, Alex Iwobi was a surprise inclusion wide on the right while Jonjoe Kenny came in as an emergency left-back. Donny van de Beek made his full debut in central midfield at the expense of André Gomes.

With Goodison roaring them on, Everton began on the front foot and might have scored with barely two minutes gone when Gordon was played in by Calvert-Lewin but he delayed his shot a fraction too long and a gilt-edged chance went begging.

They didn't have to wait too much longer for the first goal, though, as Coleman initiated a fine passing move that saw Gordon touch a lovely pass inside two defenders for Van de Beek and when Calvert-Lewin couldn't quite divert the Dutchman's low cross home, the ball sat up invitingly for Coleman to crash it home with a lunging header on the goal line.

Leeds had been swamped in the early going but Rodrigo almost had them level out of nowhere in the 18th minute when he thumped a dipping half-volley off Jordan Pickford'a crossbar from 30 yards out.

Five minutes later, however, Everton doubled their lead. Richarlison's determination won them a corner on the right that Gordon swung in beautifully and Keane battled his way to meet it with an unstoppable header.

Gordon tested Illan Meslier with a low shot and Iwobi curled an effort of his own just wide and Richarlison was denied by an excellent last-ditch block from Hjelder before Calvert-Lewin forced a one-handed stop from the goalkeeper as kept up their Everton's impetus into the break.

Again Rodrigo might have set the home crowd on edge in first-half stoppage time when he rattled the bar a second time with a wicked shot but it remained 2-0 at the interval.

Unable to maintain the furious pace of the first 45 minutes, the Toffees, understandably, sat off a little in the second half and focused on containing their opponents which they did with aplomb for long stretches. The remarkable powers of recovery that Leeds displayed at Villa Park on Wednesday were suffocated by Everton and the Yorkshiremen were restricted to one wayward Dan James effort and a rising Rodrigo shot that was never going to trouble Pickford's goal.

Instead, while Marcelo Bielsa's side failed to register a shot on target all game, it was the hosts who wrapped up the scoring when Allan laid the ball off to Richarlison, he danced along the 18-yard line and fired a low shot that crept inside the far post via Gordon, with the goal ultimately awarded to the young winger who had again been superb throughout.

Lampard's men would have put the icing on the cake in injury time were it not for Meslier. Dele Alli, on as a substitute for Calvert-Lewin, whipped a sublime ball behind the Leeds defence towards the penalty spot and his fellow sub Rondon met it almost perfectly on the volley but the keeper pulled off an outstanding one-handed save to divert it over the bar.

Nevertheless, it was a day to remember for the Blue side of Merseyside as the immediate threat of dropping into the bottom three was eased and the players not only proved that they have the talent, fight and determination to pull themselves clear of danger but they'll also have the backing of their magnificent home support behind them.