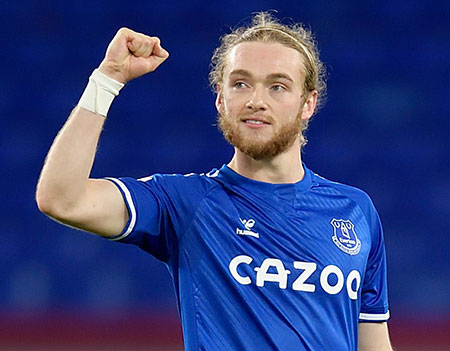 Tom Davies has resumed training with the first-team squad as he works his way back from surgery.

The midfielder has been sidelined since November after picking up a knee injury in the goalless draw with Tottenham Hotspur.

He then sustained a hamstring tendon injury that required corrective surgery and had not been expected to return this season.

He wasn't registered as an eligible player in Everton's 25-man squad on that basis but was reinstated after Jean-Philippe Gbamin joined CSKA Moscow on loan in February.

Whether Davies ends up playing again before the end of the campaign remains to be seen — given that the injury is similar to the one that has dogged Dominic Calvert-Lewin, the club's medical staff may take a cautious approach with his rehabilitation.

I wasn't going to put it quite as harshly but if he is fit I don't seeing him making a difference this season or any other.

Meanwhile Donny VdB is still out, as is Gomes, so Tom Davies might be rushed back faster than he and we expected over the next week or two.

Ed Prytherch
5 Posted 29/04/2022 at 17:26:53
Tony, Iwobi was "rubbish" until he worked with Frank Lampard's coaches. Wait and see is a better strategy IMO.
Andrew Ellams
7 Posted 29/04/2022 at 17:36:43
Wasn't Davies excluded from the PL squad registered for the second half of the season anyway?
Tony Everan
8 Posted 29/04/2022 at 17:39:11
He’s 24 in a couple of months, coming into his prime years. I don’t think it’s fair to completely write him off, he’s young player who has given his all to the club whilst we have been going through very turbulent times. As Ed says, see how he gets on. With the new coaching set up and a top class midfielder as manager he will benefit from that along with adding a bit more maturity to his game. It’s been a hard slog getting back to fitness from a bad injury, so good luck to him , he’s a human bing and needs some support.
Danny O’Neill
9 Posted 29/04/2022 at 17:51:09
Like many, I had hopes for Tom.

On one hand, he is a Jonjoe Kenny. You see potential and want them to succeed.

But on the other, are they good enough? I haven't seen enough to be honest.

But then how much have they both been victims of the uncertainty that has plagued our club? Let alone established players, how are youngsters supposed to develop when the right hand is not talking to the right hand and we have 6 managers in just as many years?

At times this season he could have done a job for us had he been fit too.

If we stay up though a squad player at best (thankfully a cheap 1 based on wages).

"To be fair, if we go down, he will likely be a regular starter."

If this club really wants to move forward long term and try to push themselves up the table, then we are going to have to have better players than him.

In case you've forgotten we are almost financially embarrassed and anybody sold will be to lessen the debt, not to lash out on new players until Mr Usmanov finds another way to sponsor something, which will be a long way away.

Players who put the effort in, like Tom Davies, will be needed whether we stay up or not and even if he isn't a first choice certainly a squad member and most definitely if we do go down as our "better" players won't want Championship football.

Gbamin has been doing OK but he has a new manager now — Alan Pardew — who seemingly was so troubled by threats from Putin and Lavrov to nuke Britain this week that he's decided to move to Russia and takeover CSKA Moscow.

I know Alan Shearer after Kashogi, and Mike Gatting in South Africa wheeled out the old “I don't keep up with politics” line but FFS, what a moment for Pardew to go to Russia.

I liked him as a player at Palace and thought he was underrated as a manager but swanning off to Russia while they're bombing Ukraine and threatening to nuke your own country! Sorry Alan but you've gone down in my estimation.

Pardew? I can't go with underrated. For me he's in that batch of British managers that got away with it because they were British and kept getting jobs.

Also, wasn't he the one who done that awkward and embarrassing "dad dance" thing at Wembley? Not that I should judge his managerial ability on that. Just saying.

I'm thinking of his time at Newcastle when he had zero money and had them in the Top 6 mix.

I think the league has gone even more uncompetitive since those days. Forget the Top 6. There is now a Top 2 and a Bottom 2. The rest can literally finish anywhere in between.

Anyway, it's Saturday morning and we don't play until tomorrow. Give I called it, what's the view on embarrassing manager moments:

2. Tony Adams's sprint coaching session in Spain as the players looked on bemused.

Ian Jones
24 Posted 30/04/2022 at 07:22:10
For me...Danny's comment (see below) sums the situation up with both Jonjoe and Tom. Always easier for young players to fit in and develop in a decent side that isn't struggling or isn't in a seemingly constant period of transition.

'But then how much have they both been victims of the uncertainty that has plagued our club? Let alone established players, how are youngsters supposed to develop when the right hand is not talking to the right hand and we have 6 managers in just as many years?'

But Tom is local and for some reason local players are given more slack, and have an easier ride. Just like Kenny, nowhere near good enough.

I would hope the club recognise that the pressure on homegrown players is greater here at Everton. I'm afraid to say many of the fans love nothing more than knocking down a local lad, shortly after they have piled their enormous and frankly unrealistic expectations upon the player's shoulders for a season or two.

Agree wholeheartedly about Lookman though, he looks like the player now everyone expected him to be. Not sure if there is an attitude problem or not but he couldn't wait to get out of our club. It's almost like we mishandled him somehow, surely not though, that would be negligent and we all know how well run our club is.

I think that he is underrated and his best is yet to come.

Andrew James
40 Posted 02/05/2022 at 21:56:45
In a season where the midfield has been so fragile in terms of numbers, I would definitely have taken Tom rather than not. He can play in the DM role, the box to box one or even higher up. He has his weaknesses but he always gives his best and works hard.

We've doubted certain players having the heart for this campaign. Well we know Pickford, Richarlison, Seamus and Gordon do. Tom would number amongst them if fit.

Maybe that label can be tagged to every single player, manager, coach, physio and board member etc. of our great club.

On the flip side, if your looking at players that may be good enough for a top 4 / top 6 Premier league side I can't see too many stand out candidates.

I never understand why some fans always target the young local lads as being the problem. Frequent comments like, "he only gets a chance because he's young", "never good enough", "robbing a wage".

A good young player with potential will never improve if they are not given a chance.

If you think the ex-acadamy players are robbing a wage and are not worth the money, then I wouldn't like to witness what you would do to several expensive senior player's who have played regularly and got us into a relegation scrap.

I'd much rather a few Tom Davies' in the squad over a Siggy, Delph, Mina or Moise (?) Keans.

ps I rate Mina but if he's only fit for 10 games a season he has to go.

Dave Abrahams
47 Posted 10/05/2022 at 12:15:20
I would rather have a fit Tom Davies than the Dutchman from United, or El Ghazi, who have come here and done next to nothing but cost a lot of money in wages and signing-on fees. I must add that, in El Ghazi's case, he has had no say in the matter he just hasn't been picked. But I'd take Tom over Gomes with the vast difference in wages and also attitude.

As Danny says, neither Tom or Jonjoe have played in settled teams after being managed by about six different managers, they can still be part of our first team squad in the Premier League next season, hopefully.