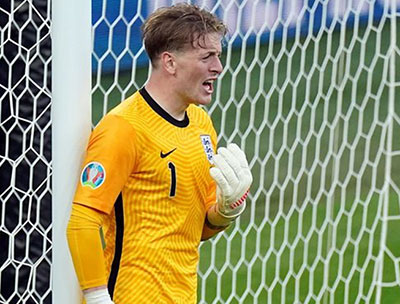 England lost in Hungary and the Republic of Ireland were humbled by Armenia as both Jordan Pickford and Seamus Coleman tasted Uefa Nations League defeats this weekend.

Pickford played the full 90 minutes as Gareth Southgate's jaded-looking Three Lions went down 1-0 in a stadium full of under-14 children in Budapest to Dominik Szoboszlai's controversial penalty after Reece James had harshly been adjudged to have fouled Zsolt Nagy.

Meanwhile, in Yerevan, the Republic went up against a side that had been beaten 9-0 by Norway in their last outing and also lost to a single goal, scored by Eduard Spertsyan, despite Stephen Kenny's men dominating possession.

There had been better news last night for Anthony Gordon who came on midway through the second half for England U21s as they beat the Czech Republic 2-1 in European Championship qualifying.

England's senior side are back in Nations League action on Tuesday when they travel to Germany while the Irish face Ukraine on Wednesday, three days after the Ukrainians play their decisive World Cup play-off final match against Wales in Cardiff.

Looks like a player that's played for a team in three finals and not scored a goal.

Bowen shoulda scored with that!

Today's defeat was coming as they have been rather unimpressive in so many recent games.

Too many players are okay at league level but cannot step up to international level.

What other measure are you using to rate them? We may not be the best in the world but we're absolutely up there, even if all the pieces haven't quite fallen into place yet.

As for tonight's match… it doesn't matter. A glorified friendly at the end of a long season. A few players being looked at for the World Cup or beyond. An experiment that didn't work. That's all. We move on.

Annika Herbert
15 Posted 05/06/2022 at 06:31:56
Joe @ 14, easy to call England overrated. They reached both the semi-final and the final of those competitions by having one of the easiest schedules you could hope for.

When they faced a decent team in those competitions, they were swiftly beaten. Tom is correct in his assessment, I am sorry to say.

Danny O’Neill
16 Posted 05/06/2022 at 07:27:14
I genuinely don't understand this competition and I'm very well quoted on being indifferent to England and international football other than enjoying watching the football whoever is playing.

I'm more interested in wishing away time until next season's fixture list is released and it's August.

Bernie Quinn
17 Posted 05/06/2022 at 07:44:17
A pointless competition with no thought of league teams having to prepare for the coming (and not far off) season. No doubt there will be injuries – and remind me, who pays their salaries? Just damn silly.
Eddie Dunn
18 Posted 05/06/2022 at 09:14:04
There has been a lot of talk about the workload on players and the authorities come up with these pointless competitions. Just give the lads a rest.

These guys should be in Dubai on a concrete Island watching private jets overhead.

Christy Ring
21 Posted 05/06/2022 at 15:39:11
Ireland were shocking but, regarding the England game in Hungary, I believe Uefa are totally spineless and hypocritical.

The stadium was supposed to be empty because of the shocking racial Hungarians, but kids were allowed, with one adult with every 10 kids, and to hear the booing from kids to the English players for taking the knee – a disgrace rendering the Uefa sanctions a farce.

Mick Roberts
22 Posted 05/06/2022 at 16:09:55
Joe, the reason they got to the World Cup Semi-Finals was because of the luck of the draw – not because of how good they were. They only played one good side, Belgium, and got hammered, and then lost to a very average Croatia.