Pickford in goal as England draw in Germany 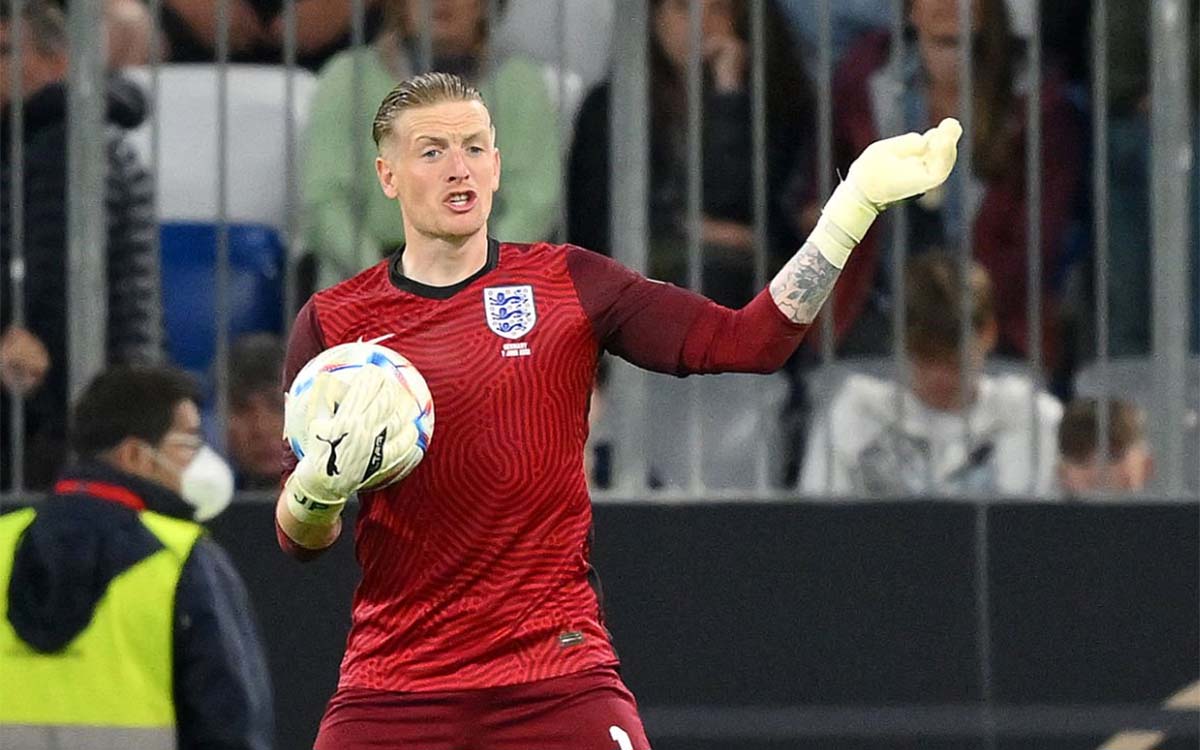 The Nations League continued tonight with England taking on Germany at the Allianz Arena in Munich. Jordan Pickford continued as first-choice goalkeeper despite pressure from Arsenal's Aaron Ramsdale, who was on the bench.

England were looking to improve on their lowly place at the bottom of Group A3 after losing their opening game in Hungary on Saturday.

But after Jonas Hofmann had opened the scoring they had to come from behind to snatch a draw thanks to a very dubious penalty awarded to Harry Kane who looked very much offside in the build-up to the foul.

A deliberate touch by a German defender was deemed to have reset the play, however, and the Tottenham striker duly converted with his usual efficiency.

Elsewhere, Anthony Gordon started for England U21s and had a fine game against Albania, claiming an assist for one of the goals in a 3-0 win.


Jason Hewly
1 Posted 07/06/2022 at 18:48:52
International football needs to stop milking these players. The summer recess should only be broken for a proper tournament, not some half-baked league. The players are getting injured through fatigue, and these games just add to the burden.

And yes, I know they used to play Christmas Day and Boxing Day, but the nature of the sport has changed. It's now much more about athleticism than it ever was. If we want them to stay out of the red zone during the season, we have to give them a proper rest.

All that said, I'll probably watch. Best of luck, Jordan. I hope you keep a clean sheet, get subbed for the second half, and then the German team gub the England team 6-0.

Peter Moore
2 Posted 07/06/2022 at 18:52:35
England vs Germany. What a cracking international fixture usually. However, this Mickey Mouse meaningless international tournament must be the dampest squib ever. The fact it is on Channel 4 says it all.

All I care about is the squad getting the much-needed overhaul it needs and having a hopefully good pre-season to be able to build a strong season that banishes the trauma of last season to the history books.

It's a given how shite England are but shocking to see germans so technically inept. 2 touches where one is required, the ball bouncing off flat footed chumps and simple 10yd passes mis-hit.

England could win this

Followed by shouts of Ramsdale for Pope?!

Update: A redemption save by Pickford.

Even the commentator thought there was a slight deflection but, apart from that, he is not being helped by a poor England side.

Pickford's distribution was poor at times but no fault for the goal, he would've had to have been the best in the world (Neuer) to stop that and not the second best.

I think it's because England are an international version of Everton - historically famous but in a death spiral going back decades.

Only so much hopeless delusion a fan can absorb

If you see the way the striker rolled the ball before striking Pickford was already readjusting, his feet.

It shows how blight the football media has become and scrapping the barrel is Channel 4, with their football shoes.

But actually, not arsed about the England result, all that counts is Everton.

Gonna be a hell of a preseason in the transfer market and trying to understand where Everton can compete in this pre-season.

Bill Gall
26 Posted 07/06/2022 at 22:38:04
No mention of Pickford stopping another couple of goals with good saves. Just read the points for players on sky sports and they give Pickford the lowest with 5... I guess to improve your points all you have to do is move to a London club.
Brendan McLaughlin
27 Posted 07/06/2022 at 22:48:05
Paul #23
See Bill #26
Tom Bowers
30 Posted 07/06/2022 at 23:51:38
England lucky against a makeshift German side who showed up England's defensive weaknesses and Southgate's poor strategy. Southgate has his fave's and I think another manager wouldn't pick a few of them.

A poor performance against the Azzurri will see them exit this useless competition.

Both teams seemed erratic, but I thought that Germany, although nowhere near the standard of the team that emerged around 2008, entertained at the 2010 World Cup and won the 2014 World Cup, they still always looked more comfortable on the ball than England.

Pickford has improved these past 18 months, but I don't think there is a better keeper than Neuer in the world. Schalke Academy product. Bayern also took Nubel from Schalke, who came through their Schalke II team. He's been on loan at Monaco, but still a Bayern player. I'd keep an eye on him if we're needing to replace.

I don't even understand this competition, but it's football and can keep me going until August.

Terry Farrell
33 Posted 08/06/2022 at 13:11:44
Paul, spot-on, mate. The nick off Stones made all the difference to saving it. Slow motion doesn't show it, in real time it was noticeable.
John Burns
34 Posted 08/06/2022 at 20:38:32
I like Harry Kane and he will no doubt be England's highest scorer in the near future. However, I will always doubt this being a gold standard honour, due to the level of international teams he has faced. See the table below (courtesy of Wikipedia!).

Jimmy Greaves's ratio, for example, of 44 goals in 57 games is exceptional. I doubt there was an Estonia or San Marino goal amongst them. Surprisingly also, is that Frank Lampard is Number 10 all-time scorer. Never knew that!

Ray Robinson
35 Posted 08/06/2022 at 20:54:12
John, I accept entirely the point you are making about the cheapness perhaps of some of Kane's goals for England but let's not forget that some of the matches that are considered difficult nowadays were far easier back then in the sixties when Greaves played.

Without looking it up and relying on memory, I seem to recall England winning 8-0 at Wembley (vs Mexico?) and 9-3 against Scotland. Did Greaves bag any of those goals, I wonder? We certainly wouldn't achieve those scores these days!

Add to the fact a quarter of his goals are from the penalty spot.

He's a decent centre forward but the number of goals don't tell the whole story. He's well behind (imo) these in this order:

I'm old enough to have seen Greaves play. He was a poacher extraordinaire, without equal but Kane is a better all round player. It's not always possible to fairly compare players from different eras though.

Have a look at the goals Greaves scored. Also, quite often in batches. And in those days, the likes of Switzerland, Norway and Northern Ireland were the whipping boys, not San Marino.

All I would say is Greaves is the greatest British goalscorer ever. His record is without equal. It's always hard to compare across generations, as you say, but of course in this generation, there are two players with similar records: Ronaldo and Messi.

I wouldn't argue he's the best English player ever, he clearly wasn't. Just our best ever goalscorer.

Kane is a good player, no doubt. But if you could pick a top 10 current Premier League players list, I'm not sure he'd make it.

I don't disagree with most of what you say. I guess all I'm saying is that we shouldn't downgrade Kane's achievement because he scored a lot of “cheap” international goals. So did Greaves!

I am a huge Greaves fan BTW.