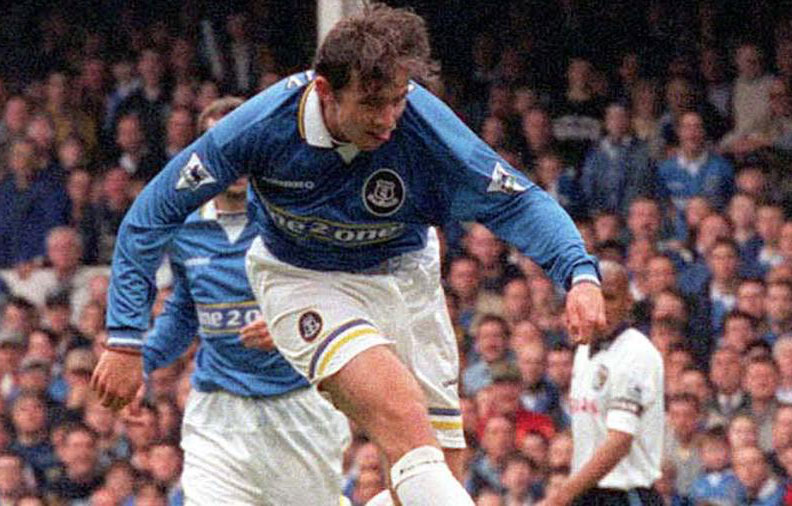 Gareth Farrelly only started 20 matches for Everton and scored one league goal in this 2½ years with the Blues but he rattled in one of the most important in the club's history at the end of his first season and went down in Goodison folklore as a result. For the second time in four years, Everton went into the final game of the season needing to get a result to avoid relegation from the English Premiership and with survival on the line, the unassuming Irishman delivered with just six minutes on the clock in a 1-1 draw with Coventry City that was enough to keep the club in the top flight.

Prior to that, Farrelly's shot accuracy from distance had become something of a running joke among supporters so it was ironic but timely that he found the target in such dire circumstances.

Gareth was signed for Everton from Aston Villa in May 1997 at the age of 21 by Howard Kendall having made just two starts for the Midlands club. Mick McCarthy, the Ireland manager at the time, predicted big things for him, however, saying: "He is a very talented player. I think Villa offered him quite a lucrative contract to stay and he has left to play first team football which is a statement of his ambitions.

"When he has played in Villa's first team he has played well, so there is no reason why he couldn't play in the Premiership next season and be a good player. He is only a young lad and the only way you become the finished product is by stringing some matches together.

"I think it will be a good move for him, but that's as long as he is playing in the first team. There is no point moving from one Premiership reserve side to another."

Based on his early league games with Everton, Farrelly came over as a powerful and determined player capable of surging runs along the centre / left half of the field, although the final ball was often lacking.

Ultimately, he failed to impress Kendall's successor, Walter Smith, who placed him on the transfer list at the end of the 1998-99 season. With no initial takers, he started the new season as captain of Everton Reserves but did get one less-than memorable senior run-out in a farcical League Cup tie against Oxford United before he was eventually farmed out on loan to Bolton Wanderers for a two-month loan in mid-November 1999.

He scored on his debut against Sheffield United and in December 1999 the loan deal was converted to a permanent move as Everton accepted a cut-price fee of around £300,000 for the out-of-favour midfielder who only got on the field twice during Smith's reign.

In all he would play six times for his country and his career would take him on three further loan spells to Rotherham, Burnley and Bradford before he joined Wigan Athletic on a permanent basis in 2004. Spells at Bohemians (as player manager), Blackpool, Cork City (during which time he had a tumour removed from his pancreas), Morcambe and Warrington Town followed before he retired in 2010 and moved into a career in law, undertaking an LLB degree at Edge Hill University, training as a lawyer in London and later spending time on secondment in Everton's legal team.