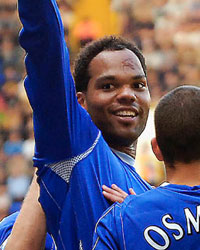 Had fate conspired against him differently, the footballing world might not have ever heard of Joleon Lescott and Everton would have been deprived of a rock-solid performer, albeit for only three seasons. At the age of five he was hit by a car and suffered potentially life-threatening head wounds, the scars of which he prominently bears to this day.

At the time David Moyes began sniffing around Molineux in the spring of 2006, Lescott was regarded as one of the hottest prospects in the Coca Cola Championship, despite the fact that his form for Wolves had dipped a bit towards the end of the 2005-06 season.

Although Wanderers spent one season in the Premiership in 2003-04, Lescott's debut for Everton was his first match in the top flight. He played no part in Wolves' brief stay among the big boys because of a serious knee injury that kept him out for the entire season.

His knee actually required rebuilding by ace Colorado knee specialist, Dr Richard Steadman. The urban legend goes that he had been misbehaving with the girlfriend of a prominent Wolves fan and was kneecapped to teach him a lesson. Either way, the extent of that injury is perhaps why only Wigan Athletic emerged as rivals for his signature and it appeared to cause a major hiccup in Lescott's transfer to Goodison, with Everton stalling, asking for more scans, sending the lad back to the specialist, and eventually negotiating a reduced down-payment of £2.5M, with another £3M contingent on appearances.

He was handed the No 16 shirt in his first season at Goodison and with David Weir, Alan Stubbs and Joseph Yobo all putting pen to paper on new deals, there would be plenty of competition for places in central defence.

Once the season started in earnest, and David Moyes got over his initial reluctance, Lescott secured himself a permanent first team place, either beside Yobo or as a stand-in at left-back, and even on occasions in midfield.  And his performances were a revelation, fully rewarding the faith placed in him by the manager.

As the season progressed, Lescott simply went from strength to strength, getting better, more confident, more composed every game.  By Christmas, the predictable talk of an England place started, as well as rumours of interest from Real Madrid.

Lescott's imperious command of either central defence or left-back, played a significant part in the improvements to the second half of the season that saw Everton ascend from 10th to secure 6th place and Uefa Cup football for the 2007-08 season, when he donned the famous No 5 jersey.

And didn't he do it proud! Rarely guilty of lofting the dreaded hoofball up the field, his imperious performances become a steady and reliable feature of the new season as Everton recovered from a shaky lapse in form to climb back to 5th place by New Year's Day, on the back of a long unbeaten run and much improved football.

Lescott had chipped in with 5 goals before Christmas, made his full England debut in his country's ill-fated Euro 2008 qualification campaign and emerged as one of Moyes's most astute purchases.  In March, he agreed a contract extension through 2012 and was justifiably lauded with Player of the Season awards at the end.

Although he made an uncharacteristically uncertain start to the 2008-09 season, Lescott soon settled back to his usual form and together with Phil Jagielka formed the defensive rock on which the Blues's charge to a second-sucessive fifth-place finish and an FA Cup Final appearance was founded.

Weighing in with more goals from defence, Joleon had established himself as an invaluable member of Moyes's team.

Unfortunately, the partnership fell apart when Jagielka suffered a freak anterior cruciate ligament injury in April 2009 and was sidelined until well into the following season.

In the interim, Lescott's head was decisively turned by the promise of unthinkable riches and a crack at the Champions League by Manchester City and after a bitter and protracted transfer saga that ran almost the entire summer, the Birmingham native completed a £22m move to Eastlands, leaving Moyes with an unusually large warchest but little time in which to address the large hole in his defence.

Lescott recounted the events of that summer 8 years later.

"I had spoken with the manager and expressed a desire to leave, but the club didn't want to sell at that moment," Lescott told Sky Sports.

"I was under the impression that if I stepped in and made it clear I wanted to go then it would make it easier for them, which is what clubs tend to do. It's strange because if clubs don't want to sell you they wouldn't reveal you had put in a transfer request. That is only going to hurt your relationship with your fans.

"So you know when a club is genuine or serious about not wanting to sell you if you put in a transfer request and it is not leaked. Then you realise you are not going.

"It was a test. I was told by my representatives at the time that it's a test and if you put it in and they release it then you are more likely to leave.

"I expressed my desire to play for Man City due to what they were looking to do in the future," Lescott added. Midway through August 2009, Lescott submitted a transfer request, although manager David Moyes was still adamant that his player was not for sale.

"It proved a great decision for my career. I was in squads for England and doing well for Everton but Man City's desire was to win the Premier League and play in the Champions League and, with the greatest respect to Everton, they didn't have that ambition at the time, so it made sense for me to do whatever was necessary to get out of Everton.

"I had to speak to the manager a few times and the chairman and tell them I wanted to leave, and hand in a transfer request, that was pretty much it from my part, but I didn't have to refuse to play or anything like that.

"As hard as it was to do those things, as a 26-year-old I felt it was necessary. It was made clear to me that I would need to put a transfer request in."